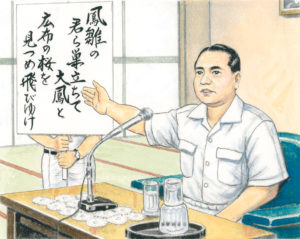 On July 23, while in Nagoya, Shin’ichi Yamamoto encouraged young women’s division members of a training group called the Seishun-kai (Spring of Youth Group).

That evening, he traveled to Mie Prefecture for his first visit to the Chubu No. 1 General Training Center. He toured the facility and viewed an exhibition of items used by the first two Soka Gakkai presidents. Such exhibitions in centers enabled members to learn from and inherit the spirit of the founding presidents.

On July 26, he engaged in discussions with representative students in the Chubu region and there established the Student Division Atsuta Group.

Shin’ichi engaged each day in a “bold struggle” to encourage one person after another.

On August 6, he visited the Kyushu General Training Center in Kagoshima Prefecture. After returning to Tokyo on August 12, he gave his all in a three-day guidance tour of Ibaraki Prefecture.

On August 19, he revisited the Kyushu General Training Center, where, the next day, he participated in the 10th anniversary of a young men’s training group called the Hosu-kai (Young Phoenix Group). Wishing that these youth dedicate their lives to realizing kosen-rufu alongside their mentor, Shin’ichi composed a poem and presented it to them.

In addition, on August 22, he first joined the monthly headquarters leaders meeting, then attended a meeting commemorating the 10th anniversary of the young women’s Hosu Group. Shin’ichi was firmly convinced that the members of all training groups, and in fact all Soka Gakkai members, were “Shin’ichi Yamamotos” who shared the mission of kosen-rufu.

The next day, he fully devoted himself to encouraging a woman who had pioneered activities on Kikaijima, one of the outer islands in the Amami Island group.

On August 24, the anniversary of the day he joined the Soka Gakkai and became a disciple of Josei Toda, he attended a joint meeting with representatives of the Kokubu and Kiyomizu greater blocks. The following day, he attended a meeting of the Shin’ichi-kai training group.

After returning to Tokyo, he attended culture festivals in Kanagawa and Saitama Prefectures, and continued pouring his energy into encouraging fellow members. 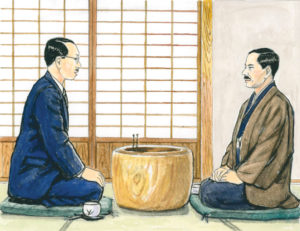 November 18, 1930, which became Soka Gakkai Founding Day, is the publication date of the first volume of Tsunesaburo Makiguchi’s Soka kyoikugaku taikei (The System of Value-Creating Pedagogy). This groundbreaking work was born out of a conversation between mentor and disciple.

One winter evening, Mr. Makiguchi and Mr. Toda talked late into the night, seated around the charcoal brazier at the latter’s home. …

Immediately after telling Mr. Toda that he wanted to publish his educational theories, Mr. Makiguchi admitted that the prospects were dim, “But it is unreasonable to publish a book that won’t sell and will only be a financial loss.” …

Toda replied with conviction: “Sensei, I’ll take care of it!”

“I don’t care. I’m not wealthy, but I have nineteen thousand yen. I’ll gladly invest it all.”

Mr. Makiguchi looked intently at Mr. Toda and then nodded, “All right, if you’re so determined, let’s go ahead with it!”

Mr. Makiguchi’s eyes sparkled brightly. He added softly, as if to himself, “Well, then, what shall I call it?”

“What’s the aim of your educational theory?” asked Mr. Toda.

“In a word, to create value,” answered Mr. Makiguchi.

“Yes, they’re not quite right, and something like ‘Creative Education’ doesn’t quite capture it, either.”

His cheeks flushed with excitement, Mr. Toda said: “Sensei, how about calling it ‘value-creating education’?”

It was already midnight. Through the dialogue of mentor and disciple, the term value creation was invented. (NHR-23, 257–58)

Excerpts From Nichiren’s Writings in Volume 23