This installment, published in the September 16, 2020, issue of the Seikyo Shimbun, focuses on passages from Nichiren Daishonin’s writings that Ikeda Sensei discusses in volume 23 of The New Human Revolution.

“Therefore I should first of all learn about death, and then about other things.” (“The Importance of the Moment of Death,” The Writings of Nichiren Daishonin, vol. 2, p. 759) 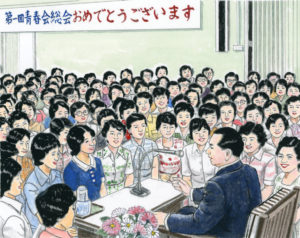 “None of us can avoid death. … When I spoke with British historian Dr. Arnold J. Toynbee (1889–1975), he said with emotion that all human beings die, and we must all face the harsh reality of birth and death in this existence, but we spend our time in social diversions, deceiving ourselves and refusing to look this fact in the face. That’s why, he said, he wanted to speak with me, a Japanese Buddhist leader, about Buddhism. He wanted to learn about Buddhism.

“Without a fundamental solution to death, we can neither have a proper view of life nor sound values nor enjoy true happiness in life. …

“Nichiren Buddhism offers a fundamental solution to the problem of death. If you dedicate your life to kosen-rufu, you will not only achieve a state of indestructible happiness in this existence but be able to walk a great path of joyous life eternally across the three existences of past, present and future. …

“So long as you live dedicated to kosen-rufu and assiduously practice your faith, your life will be united with the fundamental Law of the universe, the Mystic Law, and you’ll be able to calmly overcome all sufferings.

“An undercurrent of benefits flows within those who earnestly practice this Buddhism. Though powerful winds may blow and the sun beat harshly down, in the end such practitioners will be richly nourished and bear the fruits of happiness.” (The New Human Revolution, vol. 23, pp. 250–52)

“There is no true happiness for human beings other than chanting Nam-myoho-renge-kyo.” (“Happiness in This World,” WND-1, 681)

Daimoku Is the Driving Force for Conquering Hardships 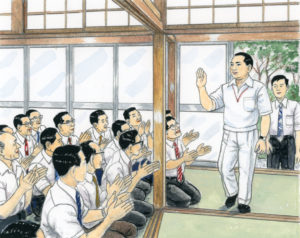 On August 24, 1976, Shin’ichi Yamamoto attended a gongyo meeting with representatives from Kokubu (which is now the city of Kirishima), located close to the Kyushu General Training Center. He emphasized the importance of advancing based on faith.

“In the Lotus Sutra we find the words, ‘They [who have heard the Law] will enjoy peace and security in their present existence and good circumstances in future existences’ (The Lotus Sutra and Its Opening and Closing Sutras, p. 136). But various obstacles arise in the path of kosen-rufu, and life is a battle against our personal karmic destiny. ‘Enjoy peace and security in their present existence’ doesn’t mean that life will always be smooth sailing, with no troubles or challenges. It describes a life state in which, even when we experience difficulties and trials as fierce as angry breakers, we are able to courageously and serenely overcome them, never retreating a step.

“Triumphing boldly in life, come what may, is the true meaning of enjoying peace and security in our present existence. What matters is being able to experience in our final years that our life has been one of peace and security in our present existence aft er having triumphed over the storms of adversities that may have marked our previous years. To achieve that, we must never stray from the Soka Gakkai or abandon the Gohonzon, no matter what, and continue chanting Nam-myoho-renge-kyo and striving courageously for kosen-rufu as long as we live. …

“No matter how much we’re suffering, we should rouse faith in the Gohonzon and chant with the spirit ‘I won’t be defeated!’ If we can do that, the courage to face our troubles will well up from within. We’ll be invigorated and filled with joy. The way to solving all our problems will open before our eyes.

“Steadfast prayer is the key. Chant intensely every day, whether others are noticing or not—that’s the driving force for everything.” (NHR-23, 316–17)

The “Bold Struggle” chapter details the origins of the memorial halls and special display rooms dedicated to the founding presidents often found in Soka Gakkai centers.

In 1953, the Soka Gakkai Headquarters moved from Tokyo’s Nishi-Kanda to Shinanomachi in Shinjuku Ward. Second Soka Gakkai President Josei Toda designated a room much better than his own office to honor his mentor, first Soka Gakkai President Tsunesaburo Makiguchi, thoughtfully placing a framed photograph of him there. Mr. Toda concluded that constructing facilities that could forever preserve the spirit of his mentor was necessary in order to “ensure the eternal survival of the Soka Gakkai” (The New Human Revolution, vol. 23, p. 255).

For the sake of the future, Sensei from 1956 began filming major Soka Gakkai events, as well as Mr. Toda in action. Even after his passing, Sensei created record albums of Mr. Toda’s lectures. This reflected Sensei’s “strong wish to preserve his mentor’s direct image for posterity and accurately communicate his true spirit” (NHR-23, 263).

On March 3, 2010, the Soka Gakkai Mentors Hall was opened in the Soka Gakkai Headquarters Complex. That same year on October 2, the 50th anniversary of SGI World Peace Day, Sensei visited the center for the first time, doing gongyo and chanting Nam-myoho-renge-kyo to honor the noble lives of presidents Makiguchi and Toda.

To cherish the mentor in one’s heart day after day, thinking, “What would my mentor do?” and taking action—this is the mark of a genuine disciple.

Transforming Hardship Into Happiness and Joy