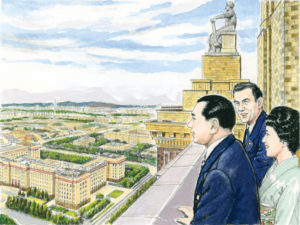 On September 8, 1974, Shin’ichi flew to the Soviet Union at the invitation of Moscow State University. Rector Rem Khokhlov and others welcomed him at the airport. The next day, Shin’ichi and his delegation visited the university and exchanged views with Rector Khokhlov about the state of university education.

In the afternoon, Shin’ichi conversed with Chairperson Nina Popova of the Union of Soviet Societies for Friendship and Cultural Relations with Foreign Countries, an important Soviet organization that focused on nongovernmental exchange with foreign countries.

On September 10, he met with Vyacheslav Yelyutin, minister of higher and secondary specialized education, and V.P. Ruben, chairperson of the Council of Nationalities, one of the two chambers of the Supreme Soviet.

The next day, after observing classes in session at a Moscow elementary and secondary school, Shin’ichi met with the vice president of the Soviet Union’s Academy of Sciences, opening a path for scholarly exchange with the Institute of Oriental Philosophy in Tokyo, which he had founded.

Traveling to Leningrad (present-day Saint Petersburg) on September 13, Shin’ichi visited various sites, including Piskarevskoye Memorial Cemetery. He paid his sincere respects to those who had lost their lives in World War II. Coupled with his prayer to eliminate war, he firmly resolved to widely communicate the truth of “just how terribly the Soviet people suffered during the war” (The New Human Revolution, vol. 20, p. 195).

Returning to Moscow, Shinichi took part in a signing ceremony for an academic exchange agreement between Moscow State University and Soka University on September 16. Afterward, he visited author and Nobel laureate Mikhail Sholokhov at his home where they engaged in a lively discussion about, among other topics, the subject of fate.

On the last day of his visit to the Soviet Union, Shin’ichi met with Soviet Premier Aleksey Kosygin. He relayed to the premier that Chinese leaders had no intention of invading any other nation, and he asked Premier Kosygin very directly, “Is the Soviet Union considering attacking China?” (NHR-20, 229).

The premier responded in a decisive tone: “Please feel free to tell China’s leaders that the Soviet Union will not attack their country” (NHR-20, 230).

A bridge spanning the wide gap caused by tensions between China and the Soviet Union was being built by Shin’ichi’s hand.

Following these talks, a joint communiqué affirming the progress made in cultural exchange between Japan and the Soviet Union was issued by Shin’ichi and the Union of Soviet Societies for Friendship and Cultural Relations with Foreign Countries. Shin’ichi then departed for Japan. 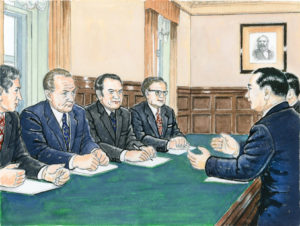 Bridge of Peace Between China and the Soviet Union

During Shin’ichi’s first visit to the Soviet Union in September 1974, he met with Soviet Premier Aleksey Kosygin. Their discussion turned to the harsh experiences of the Soviet people during World War II and the future of Soviet relations with China.

Shin’ichi asked, “Where were you during World War II?”

Mr. Kosygin replied softly, “I was in Leningrad during the German siege.” He stopped and was silent for a moment. He seemed to be recalling that time.

Anyone who has known the horror of war is loath to repeat the experience. …

A determination to build peace shone in Premier Kosygin’s eyes.

Fixing his gaze on the premier, Shin’ichi said with energy: “Just like the Soviet people, the Chinese people wish only for peace. … ”

The conversation was reaching its most essential point. Shin’ichi believed that if he communicated the true feelings of the Chinese people and their vice premier Li Xiannian, with whom he had met on his visit to China three months earlier, Premier Kosygin would act wisely.

Shin’ichi forthrightly communicated his impressions from his China visit to Premier Kosygin: “China’s top leaders assured me that they have no intention of attacking any other country. But, fearing the possibility of a Soviet attack, they were digging bomb shelters and taking other precautions in preparation. They are anxiously observing your country’s actions. Forgive my directness, but is the Soviet Union considering attacking China?”

Premier Kosygin looked sharply at Shin’ichi. Beads of perspiration stood out on his forehead. Then he spoke with resolve: “No, the Soviet Union has no intention of attacking China. In terms of protecting the collective security of Asia as well, we have no desire to isolate China.”

“I see,” Shin’ichi said. “May I convey that to the leaders of China?”

Premier Kosygin was silent for a moment. Then he said in a decisive tone, “Please feel free to tell China’s leaders that the Soviet Union will not attack their country.”

Shin’ichi looked at the premier with a smile and said, “If that’s the case, then why not be friends with China?”

The premier looked at a loss for words. Then, a warm smile spread across his face. The meeting of minds between the two men blossomed into smiles. (NHR-20, 228–30)

Exchange between nations on the political and economic levels is often disrupted or derailed by national self-interests. That is why Shin’ichi continued to emphasize the importance of broad-ranging cultural, educational and academic exchange on the private level in order to establish lasting bilateral peace and friendship.
(NHR-20, 130)

Buddhism, which expounds that all people possess the Buddha nature within, is also a teaching of the sovereignty of the people. And the Soka Gakkai’s movement for kosen-rufu is aimed at actualizing a world in which the people are the true sovereigns and can lead happy and fulfilled lives. (NHR-20, 170)

The world is one, and the human race is one. For people to reach out to one another and work together is a historical inevitability. (NHR-20, 198)