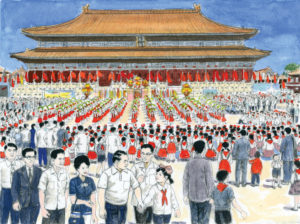 On May 30, 1974, Shin’ichi Yamamoto traveled to China at the invitation of the China-Japan Friendship Association. Leading up to this, he had endeavored strenuously for the improvement in bilateral relations, including issuing a declaration for the normalization of Japan-China diplomatic ties in September 1968. Bilateral ties were normalized in September 1972.

To enter the country, he walked from Lo Wu Station in Hong Kong—at that time a British territory—to Shenzhen Station in the People’s Republic of China. Then at Guangzhou, he boarded a flight for Beijing. There, Shin’ichi visited the Forbidden City (Palace Museum), engaged in discussions with President Liao Chengzhi of the China-Japan Friendship Association and participated in Children’s Day events.

At a middle school in Beijing, he felt a sharp pang in his heart when he witnessed students who were digging trenches to defend themselves in case war broke out with the Soviet Union.

At Peking University he presented school officials with a list of books he would be donating, creating a starting point of exchange with Soka University.

Then on June 6, he engaged in discussions with Chinese Vice Premier Li Xiannian and left feeling confident that China strongly desired peace.

Shin’ichi’s delegation departed Beijing on June 7, traveling through Xi’an and Zhengzhou, and arriving in Shanghai on June 10. The next evening, the group journeyed onward to Hangzhou.

Wherever he went, Shin’ichi engaged with people, talking with them and creating paths of friendship.

Returning to Shanghai on June 13, the delegation hosted a thank-you banquet. During this event, Soka Gakkai Student Division Leader Kaoru Tahara reunited with a young man who had been part of a Chinese youth delegation that visited Japan four months earlier. Seeing the two youth reunite, Shin’ichi felt that his vision—of the youth of Japan and China working with the mutual pledge for friendship and peace—was becoming a reality.

On June 14, his delegation departed Shanghai for Guangzhou. They left China the next day by walking from Shenzhen into Hong Kong. As Shin’ichi made his way across the border, he resolved: “For the sake of my Chinese friends, I will do everything I can to prevent war between China and the Soviet Union. My next trip must be to the Soviet Union!” (The New Human Revolution, vol. 20, p. 120). 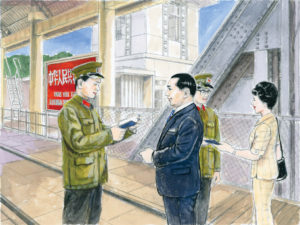 The Heart Has No Borders

In May 1974, Shin’ichi Yamamoto visits China for the first time. The delegation arrived in the British Territory of Hong Kong, then walked from Lo Wu Station to Shenzhen Station in China.

Shin’ichi and Mineko conversed pleasantly, but the other members in their party were silent and looked rather glum. They were feeling tense about this first visit to China, a communist nation. …

Shin’ichi smiled and said to them: “You should put on happy faces. We’re on our way to make many new friends, aren’t we? People are the same all over the world. The important thing is to be sincere and honest. Dialogue will definitely open the way to mutual understanding and empathy.” …

After crossing a steel bridge resembling an airplane hangar over the stream, Shin’ichi and his party came upon a couple of Chinese People’s Liberation Army soldiers clad in khaki uniforms. They showed the soldiers their passports.

“Hello!” called out a voice in Japanese as a young man and two young women came running up to Shin’ichi and the others.

The young man and one of the young women were members of the China-Japan Friendship Association, while the other young woman worked for Guangzhou City, the capital of Guangdong Province. … The young man and woman from the China-Japan Friendship Association were named Ye Qiyong and Yin Lianyu, respectively. Mr. Ye said in fluent Japanese: “Welcome to China. We came from Beijing to act as your guides.”

Shin’ichi’s group and their Chinese guides enjoyed a pleasant conversation in the waiting room of Shenzhen Station. …

Mr. Ye said that he had greatly enjoyed reading Shin’ichi’s novel The Human Revolution. … Ms. Yin added that she knew the theme of The Human Revolution, and she proceeded to recite the passage “A great human revolution in just a single individual … ”

“That’s amazing!” Shin’ichi exclaimed. “I’m the author, and even I don’t remember that!” Everyone laughed at Shin’ichi’s humor. As the other members of the Japanese delegation watched Shin’ichi interact with their Chinese hosts, their image of China as a scary place disappeared. (NHR-20, 15–17)

Working selflessly for the sake of the people and society is the spirit of bodhisattvas, of the Buddha; it is the heart of Buddhist practitioners. There is no Buddhism without action. (NHR-20, 56)

Treasuring and protecting life are universal, golden rules for the very survival of humankind. (NHR-20, 95)