Volume 20 of The New Human Revolution describes Shin’ichi Yamamoto’s first visits to China and the Soviet Union, followed by his second visit to China, which all took place in 1974 across a period of barely six months. It reveals how the Soka Gakkai, a religious organization based on Nichiren Buddhism, was able to engage in dialogue with China and the Soviet Union, countries upholding Marxist-Leninist ideology that denies the value of religion.

Against this backdrop, as early as 1968, Shin’ichi had issued a proposal for the normalization of diplomatic relations between Japan and China. This was based on his conviction that Sino-Japanese friendship would help relax East-West tensions as they were being played out in Asia, and would eventually lead to the resolution of tensions on a global scale. Shin’ichi faced a spate of criticism as a result of this proposal, some even questioning why a religious leader should “don a red necktie.”[1] But he remained unwavering in his belief that one cannot truly fight for peace unless one is prepared to take on all the risks involved. For his part, he was wholly committed to the task of improving Japan-China relations.

The Soka Gakkai and Shin’ichi’s earnest efforts for peace attracted the attention of both Chinese and Soviet leaders. His plans to visit these countries took shape in December 1973 and were realized the following year. The intention of his trips was not to promote Buddhism in socialist countries, nor to engage in political negotiations. Rather, he sought to initiate steps to steer a world divided into opposing blocs in the direction of harmony and peace. As a Buddhist, his foremost objective was to help unite a world torn apart by national interests and ideologies.

Shin’ichi truly believed that “irrespective of the social or political system of the country we live in, we are all human beings.”[2] In response to questions about his reason for visiting these socialist nations, he declared: “I’m going there to meet people. … I’m making this trip to build bridges of friendship linking people’s hearts.” [3] His firm convictions were what motivated him to engage in dialogue for peace with China and the Soviet Union.

Reaching Out to the Other Side

In May 1974, Shin’ichi embarks on his first visit to China, resolving in his heart to become “a bridge of friendship”[4] linking China and the Soviet Union. This determination solidifies through his various encounters with the people in both countries.

For instance, when he visits a junior high school in Beijing, he witnesses students digging a deep trench to build underground classrooms in preparation for a potential Soviet attack. Instantly reminded of the bomb shelters that were dug out all over his own neighborhood during World War II, he determines deep in his heart to do everything he can to prevent hostilities between the countries. In another instance, during his first trip to the Soviet Union in September that year, Shin’ichi visits a war memorial museum and cemetery in Leningrad (present-day Saint Petersburg) and voices his outrage and indignation at the evil of war.

Empathizing with the overwhelming suffering endured by the ordinary people of both countries, he is driven to carry out one dialogue after another with Chinese and Soviet leaders, including Chinese Premier Zhou Enlai, as well as educators, intellectuals and young people. Slowly, a harmony of mutual understanding transcending social and political structures begins to resonate across these vast lands.

During Shin’ichi’s first visit to China, an official of the China-Japan Friendship Association assures him: “I believe that China will never invade another country.”[5] Later, in conversation with Soviet Premier Aleksey N. Kosygin, Shin’ichi communicates his honest impressions of his China visit, to which Kosygin responds: “Please, feel free to tell China’s leaders that the Soviet Union will not attack their country.”[6]

When he visits China a second time, in December 1974, Shin’ichi conveys Kosygin’s message to several Chinese officials including Vice Premier Deng Xiaoping, acting as a bridge between the two countries. In the “Bridge Building” chapter, he reflects:

It is when we courageously speak the truth that we are able to open the door to others’ hearts and allow the light of the spirit to shine through. That is how the seeds of trust are cultivated.[7]

Indeed, Shin’ichi’s approach of conducting frank and sincere dialogue helped open hearts that were closed, leading the way to trust.

The writer and political commentator Masaru Sato recently touched upon Ikeda Sensei’s dialogue-based diplomacy in his series titled “Daisaku Ikeda Studies,” which is being carried in the weekly Japanese magazine AERA. In the June 22 issue, he writes that when political revolutionaries run into a wall, they will do what they can to break that wall down. Sensei, however, reaches out to those on the other side of the wall and invites them to engage in dialogue. Through dialogue, he seeks to create allies and foster understanding between those who hold different positions and perspectives.

Indeed, regardless of their differences, Sensei has persevered in building networks of peace and humanism with people from all walks of life. When we seek dialogue, we remove all barriers and boundaries between us.

A Labor of Patience and Persistence

Contrary to Shin’ichi’s hopes, Sino-Soviet relations continued to deteriorate after his first visits to the two countries. Though his efforts did not bear fruit immediately, Shin’ichi refuses to abandon them. After all, as described in volume 16, cognizant of mounting U.S.-Soviet and Sino-Soviet tensions, Professor Arnold J. Toynbee, Britain’s foremost 20th-century historian, had entrusted Shin’ichi with the task of engaging all their leaders in dialogue, in the hope that doing so would eventually lead to dialogue among those parties themselves.

After returning from his first visits to China and the Soviet Union, Shin’ichi continues building on the dialogue with leaders in both countries. When Chinese officials ask him to refrain from visiting the Soviet Union as much as possible so as not to jeopardize his efforts to strengthen Sino-Japanese friendship, he replies: “I love China. It is precious to me. At the same time, I love all people. All of humanity is precious.” [8]

Guided by his belief in the Buddha nature residing within all people, and confident that on a fundamental level everyone wishes for peace, Shin’ichi remains steadfast to the path of dialogue.

Fifteen years later, these efforts to serve as a bridge between China and the Soviet Union finally start to blossom. In May 1989, a meeting is realized between Soviet Communist Party General Secretary Mikhail Gorbachev and Deng Xiaoping, chairman of the Central Military Commission and China’s de facto ruler, and they announce the normalization of bilateral relations. Shin’ichi is overjoyed at the news.

Not every flower planted will bloom immediately. But with steely conviction and persistent action, our earnest efforts are sure to bear fruit. As the “Ties of Trust” chapter puts it, “Great things are achieved through the steady accumulation of many inconspicuous small actions.” [9]

Kosen-rufu is the realization of the happiness of humanity and peace in the world. As a Buddhist, I will continue to work wholeheartedly to achieve that.[10]

As fellow Buddhists, let us keep our hearts ablaze with this same powerful sense of mission as we strive to widely open the way for world peace.

Translated from the June 24, 2020, issue of the Seikyo Shimbun, the Soka Gakkai’s daily newspaper. 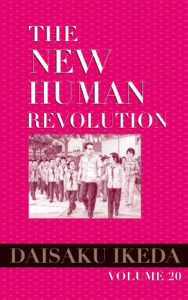 Path of Friendship
On May 30, 1974, Shin’ichi Yamamoto visits China for the first time and during his stay meets with Vice Premier Li Xiannian.

Bridge Building
On September 8, Shin’ichi travels to the Soviet Union for the first time and on this trip meets with Premier Aleksey N. Kosygin and literary giant Mikhail A. Sholokhov.

Ties of Trust
On December 2, Shin’ichi travels to China again and meets with Premier Zhou Enlai on December 5. He then travels to the United States and hands the Secretary-General of the United Nations more than 10 million signatures calling for nuclear abolition collected by the youth division. He also engages in dialogue for peace with Secretary of State Henry Kissinger.