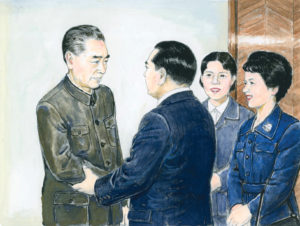 On December 2, Shin’ichi Yamamoto made his second visit to China, this time at the invitation of Peking University. Upon his arrival in Beijing, he apprised China-Japan Friendship Association President Liao Chengzhi of his discussions with Soviet Premier Kosygin. That evening, he attended a welcome banquet hosted by Peking University. The next day, he participated in a book presentation ceremony at the university.

On December 4, Shin’ichi visited the offices of the China-Japan Friendship Association. The next day, he engaged in discussions with Chinese Vice Premier Deng Xiaoping at the Great Hall of the People. Referring to the United Nations’ designation for the coming year as International Women’s Year, he proposed that a delegation of women and youth leaders visit Japan. He also suggested that the two countries work together on academic research on the ancient Silk Road trade routes.

That night, Shin’ichi and his wife, Mineko, hosted a thank-you banquet for his Chinese hosts and friends. During the banquet, Shin’ichi was informed that Premier Zhou Enlai wished to see him. Out of consideration for the health of the convalescing premier, Shin’ichi at first politely indicated that he did not expect to meet the statesman. However, learning that it was Premier Zhou’s strong wish to see him, he set off for the meeting venue.

Premier Zhou highly valued Shin’ichi’s consistent efforts to strengthen Sino-Japanese friendship, and expressed his wish for the earliest possible signing of a peace and friendship treaty between the two nations. Shin’ichi etched this into his heart as if receiving the premier’s final will. Their conversation formed an eternal pledge and bond of trust.

On January 10, 1975, Shin’ichi traveled to the United States where he met with the United Nations secretary-general in New York. He submitted signatures for a petition calling for the eradication of war and nuclear armaments.

On January 13, he met with U.S. Secretary of State Henry A. Kissinger in Washington, D.C., and handed him a letter containing his proposals for peace in the Middle East. Secretary Kissinger promised to convey Shin’ichi’s ideas to the president. Thereafter, Shin’ichi met with Japanese Finance Minister Masayoshi Ohira, who was visiting the U.S. capital, and urged for the earliest conclusion of a Japan-China peace and friendship treaty.

After visiting several U.S. cities, Shin’ichi headed to Guam where the First World Peace Conference was to be held. The curtain was rising on a new phase of the movement for peace. 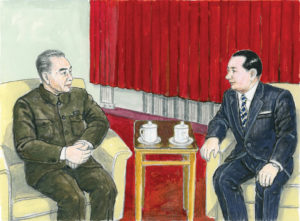 Linked by Eternal Ties of Trust

In December 1974, during Shin’ichi Yamamoto’s second visit to China, he received a message from Premier Zhou Enlai asking to meet with him. Although Premier Zhou was seriously ill at the time and his doctors were originally against it, the meeting took place because of the premier’s strong wish to meet with Shin’ichi.

Premier Zhou highly valued Shin’ichi’s consistent efforts to strengthen Sino-Japanese friendship. He said: “President Yamamoto, you have emphasized the need to foster amicable relations between the people of our two nations, regardless of the difficulties involved. I am extremely pleased by this. Bilateral friendship is our mutual wish. Let’s strive for this together.”

[Premier Zhou’s] eyes narrowed as if he were looking off into the distance, and he said in a nostalgic tone, “More than fifty years ago, I left Japan when the cherry blossoms were in bloom.”

“I would like that very much,” Premier Zhou remarked with a wistful smile. “But I’m afraid that is impossible.” It pained Shin’ichi to hear this.

Finally, Shin’ichi decided to express his thoughts: “We need you to remain healthy for many years to come, Premier Zhou. China is a pivotal nation in achieving world peace. For the sake of your nation and its eight hundred million people …”

The premier seemed to rally all his strength and began to speak. “ … The last twenty-five years of the twentieth century will be a crucial period for all of humanity. It will be necessary for the peoples of the world to cooperate and help one another as equal partners.”

“I think that is absolutely true,” echoed Shin’ichi. He felt as if he were listening to the premier’s final will.

The discussion had gone on for nearly thirty minutes. Shin’ichi wished he could have continued speaking with Premier Zhou forever, but he simply couldn’t allow their meeting to last any longer. “I promise that I will make your opinion known to the appropriate people in Japan,” he said. “And I wish to deeply thank you for taking the time to meet with me.”

This encounter was the one and only time that Shin’ichi and Premier Zhou would ever meet. However, their friendship formed an eternal pledge and ties of trust. Shin’ichi’s heart was thoroughly infused with the premier’s spirit. (The New Human Revolution, vol. 20, pp. 288–91) 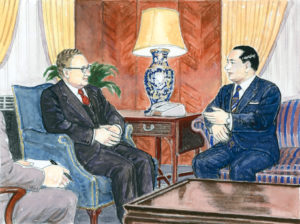 During his visit to the United States in January 1975, Shin’ichi Yamamoto met Secretary of State Henry Kissinger.

In 1973, Henry Kissinger was lauded for his role in the signing of a peace accord between the United States and Vietnam, and he was awarded the Nobel Peace Prize. …

Shin’ichi was eager to talk at length with Secretary Kissinger for the sake of global peace and to try to discover with him a new direction for humanity. Mr. Kissinger had a rational, straightforward personality and cared little for empty formalities. He was a sharp-minded analyst who always grasped the essence of the question at hand, so their discussion proceeded at a brisk pace.

When Shin’ichi asked Mr. Kissinger what he thought about a peace and friendship treaty between Japan and China, the American diplomat immediately responded that he was in favor of it and thought it should be realized. During the encounter, Mr. Kissinger inquired of Shin’ichi: “Let me ask you frankly, where does your allegiance lie with regard to the world powers?” Clearly, Mr. Kissinger’s question was motivated by the fact that Shin’ichi had visited and met with the leaders of China and the Soviet Union, and was now talking with him in the United States.

Shin’ichi replied unhesitatingly: “We are not affiliated with the Western or the Eastern bloc. Nor are we the allies of China, the Soviet Union or the United States. We are a force for peace, and we ally ourselves with humankind.”

This was the humanism upon which Shin’ichi firmly based himself, and it was the fundamental position of the Soka Gakkai.

Mr. Kissinger smiled. It seemed he understood Shin’ichi’s convictions. For the rest of their discussion, they talked about such topics as the Arab-Israeli conflict, Sino-American and Soviet-American relations and the Strategic Arms Limitation Talks. Their dialogue proceeded with the shared resonance of their wish to find pathways to peace. (NHR-20, 320–323)

The responsive chord that sincerity strikes in people’s hearts transcends all national boundaries. Sincerity is the tie that brings people together. (NHR-20, 269)

Excerpts From Nichiren’s Writings in Volume 20