This installment, published in the June 17, 2020, issue of the Seikyo Shimbun, focuses on passages from Nichiren Daishonin’s writings that Ikeda Sensei discusses in volume 20 of The New Human Revolution.

“Though the adherents of the non- Buddhist scriptures were unaware of it, the wisdom of such men [who helped and protected the people] contained at heart the wisdom of Buddhism.” (“The Kalpa of Decrease,” The Writings of Nichiren Daishonin, vol. 1, p. 1122)

Everyone Can Forge Their Own Happiness 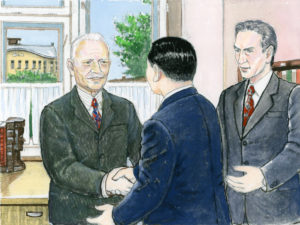 On September 16, 1974, Shin’ichi Yamamoto met with Nobel laureate Mikhail Sholokhov and had a lively dialogue that included discussion of Sholokhov’s novel Fate of a Man.

Bringing up the subject of Mr. Sholokhov’s Fate of a Man, Shin’ichi asked: “It may seem that a person’s fate can be changed by modifying their environment or circumstances, but when you think seriously about what is actually required to change one’s fate, it seems to me that the issue of self-transformation cannot be overlooked. What do you think?”

Mr. Sholokhov nodded and said: “… We are all the creators of our own happiness. Realizing happiness comes down to how much we have forged ourselves spiritually.” …

Leaning forward in his seat, Shin’ichi said: “I agree completely. Buddhism teaches how to build the strongest and most elevated self in order to triumph over even fate’s cruelest hand.” …

Mr. Sholokhov listened intently as Shin’ichi spoke. He was one of the great writers of the Soviet Union, a communist nation, but he agreed completely with Shin’ichi on the importance of the human being and the vital need for inner transformation.

The philosophies and lives of those who are masters of the art of living are always essentially in agreement with the teachings of Buddhism. In the depths of their lives, such individuals are yearning for the Buddhist Law. (The New Human Revolution, vol. 20, pp. 215–16)

“Where there is unseen virtue, there will be visible reward.” (“Unseen Virtue and Visible Reward,” WND-1, 907)

Unseen Actions for the Sake of Good Will Bring Benefits 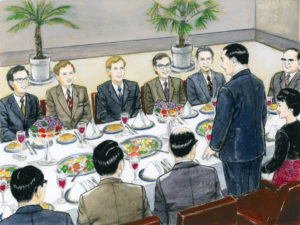 On the final day of Shin’ichi’s first visit to the Soviet Union, Moscow State University hosted a farewell dinner for him and his delegation. Shin’ichi conveyed his feelings of appreciation to the university students who were also present.

The students had helped the Japanese visitors in numerous ways during their trip, staying at the hotel with them, assisting with luggage and travel, acting as guides and arranging for their meals and cars. Shin’ichi wished to thank the students sincerely for everything they had done. …

These gifted students were likely to play an important role in promoting amicable ties between their two countries in the future, and Shin’ichi thought of them as his young friends. …

The students were very happy about the success of Shin’ichi’s visit. One of them said: “President Yamamoto, you have made a remark-able contribution to the history of friendly relations between our countries. We are very proud to have been a part of this.”

Shin’ichi stood up at the beginning of the dinner to convey his sincere gratitude. He said: “We’ve succeeded in building a bridge of friendship between Japan and the Soviet Union on this trip. All of you who have supported us behind the scenes played a pivotal role in that achievement. I would like to thank you and express my appreciation from the bottom of my heart. There is a wise saying in the East: ‘Where there is unseen virtue, there will be visible reward’ (WND-1, 907). Actions taken for the sake of good, though they may go unnoticed, are certain to benefit their doers. This is a very important philosophy for our lives.”

Uniting as a Global Family of Humankind

On January 10, 1975, Shin’ichi Yamamoto gave a speech at a welcome reception held by the Japan Society of New York, where he spoke about how philosophy could usher in a new age.

Discussing topics such as nuclear armaments and environmental pollution, he asserted that the essence of modern society’s problems “can all be traced back to human greed, egotism and lack of self-control. In other words, they are the problems of humanity itself” (NHR-20, 315).

He then suggested a new direction that humanity should aim for based on: 1) adopting a value system with a global perspective that embraces all humankind; and 2) recognizing that each human being is, first and foremost, a living entity. Basing our perspective on these two points, he stressed that we must “forge a universal solidarity” as “members of the global family of humankind.”

Considering the deep ideological divisions and nationalism prevalent in the world today, building a universal solidarity that embraces all of humanity may seem a difficult challenge. Nonetheless, in the presence of all the participants, Sensei declared his commitment to pursuing this “impossible dream” for as long as he lived (see NHR-20, 315–17).

Shin’ichi strove to construct a golden bridge of friendship between Japan and China, and opened up paths of cultural and educational exchanges between Japan and the Soviet Union. He transcended all differences to transform mistrust and opposition into trust and friendship.

For humanity to overcome the current coronavirus pandemic and the divisiveness in the world, we must also strive to foster cooperation that transcends all boundaries. It has become increasingly important and urgent for us to build on Sensei’s efforts and expand the numbers of those committed to realize a universal solidarity as members of the global family.