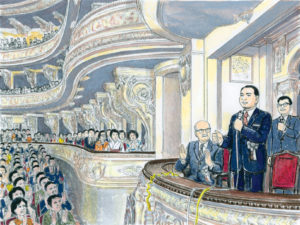 On March 7, 1974, Shin’ichi Yamamoto departed for a guidance trip that would take him to North and South America. Unable to receive his visa to enter Brazil, however, he was suddenly forced to cancel his visit there, and he quickly made new plans to visit Panama.

Shin’ichi arrived in Panama on the evening of March 18, where he was welcomed with cheers. On March 19, he visited the University of Panama and participated in the opening of the Soka Gakkai community center there. Also on this occasion, Panama Chapter made a fresh start as Panama Headquarters.

On March 20, he met Panamanian President Demetrio Basilio Lakas. That evening, Shin’ichi attended a meeting with local members, where he encouraged them to “shine as leaders of peace in Panama” (The New Human Revolution, vol. 19, p. 117).

On March 22, he arrived in Peru for his first visit in eight years. During his prior visit in 1966, the Peruvian authorities kept a close watch on the Soka Gakkai due to a misperception of the organization’s purpose. Since then, however, Soka Gakkai members in Peru had transformed the situation by building bonds of trust in society. Shin’ichi participated in various events such as the opening ceremony of the Peru Community Center and a commemorative photo session held under a blazing sun, during which he encouraged the members in between photos with all his might. While visiting Lima City Hall, Shin’ichi was presented with a special honorary citizenship. He also attended the “Peru World Peace Culture Festival” together with the mayor and other dignitaries. The Peruvian members’ songs of triumph reverberated in their great contributions to society.

Despite falling feverish and ill, the next day Shin’ichi mustered his energy to meet in Lima with the rector of Major National University of San Marcos, the oldest university in South America. They developed a deep friendship as they discussed the future of education. 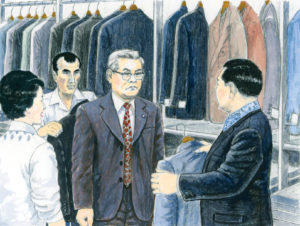 Appreciation Is the Wellspring of Happiness

In March, Shin’ichi Yamamoto visited Peru, where Soka Gakkai members, led by General Director Vincente Seiken Kishibe, had greatly transformed the perception of the Soka Gakkai in society through their persistent efforts.

On the afternoon of March 22, Shin’ichi took a tour of Lima. He wanted to see Peru’s capital and observe the way its people lived. …

When Shin’ichi came upon a clothing store, he went inside.

“Do you wish to buy some clothes?” Mr. Kishibe asked.

“Yes,” Shin’ichi replied, “I want to buy something for you.”

Observing the old and tattered suit Mr. Kishibe was wearing and his missing front tooth, Shin’ichi felt deep sympathy for the general director. He imagined that although Mr. Kishibe operated a photography studio and a stationery store, his life was probably not easy. On a tight budget, he must have carefully scrimped and saved in order to travel throughout Peru to visit members.

To joyfully give one’s own time and resources for the sake of kosen-rufu is the noble behavior of a bodhisattva. That spirit of faith is certain to manifest itself as infinite good fortune and benefit.

Shin’ichi said with a smile: “You have fought hard and given your all to working for the happiness of the members here in Peru on my behalf. As a token of my profound respect and appreciation, I’d like to present you with a new suit. Please choose one you like.”

“Oh no, I couldn’t,” Mr. Kishibe replied, overwhelmed with gratitude and embarrassment. “I haven’t fulfilled your expectations yet. I feel terrible about it. I don’t deserve to receive such a gift from you.”

“This is a small gesture of my sincere appreciation,” Shin’ichi remarked in a lightly chiding tone. “Think of it as a gift from your younger brother from Japan. Please don’t give it another thought.” He then searched for a suit that would look good on Mr. Kishibe.

“Sensei, please. There’s no need …” Mr. Kishibe interjected, tears welling up in his eyes. But then he gave in and said simply: “Thank you. If you insist.” And he bowed deeply in gratitude.

Modest people are naturally filled with appreciation. The spirit of appreciation gives rise to deep feeling, which becomes the wellspring of happiness. (NHR-19, 125–27)

Wasting time is wasting life. Creating value starts with the effective use of one’s time. (NHR-19, 93–94)

To cherish people and light the flame of courage and a sense of mission in their hearts, to enable them to bring forth genuine happiness from within their lives—this is the great path of kosen-rufu. (NHR-19, 130–31)