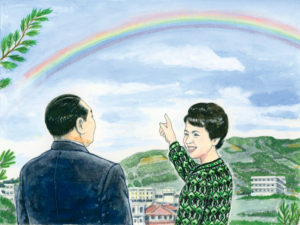 On February 2, 1974, Shin’ichi Yamamoto visited Okinawa for the seventh time, his first since the islands had been returned to Japan after 27 years under U.S. administrative control.

On February 3, Shin’ichi traveled to Ishiga-kijima, one of the Yaeyama Islands. While there, he participated in a photo session with local members, donated books to local school libraries and joined in the Yaeyama Festival, which was open to the general public. He was invited to wear a headband and happi, a festive coat, and to join in one of the dances.

The next day, Shin’ichi stopped by Yadopike Beach, where he had a discussion with local members. He shared his hopes for the Yaeyama members, saying, “I hope you will all be beacons of faith lighting the way to the future for your beloved homeland” (The New Human Revolution, vol. 19, p. 28).

On February 5, Shin’ichi’s final day on the Yaeyama Islands, he attended a memorial service to pray for the ancestors of all Yaeyama residents. He then departed for Miyakojima. Shin’ichi participated in the Miyako Traditional Culture Festival, where he expressed his wish that the Miyako Islands “will flourish as an eternal oasis of peace and happiness” (NHR-19, 42).

The next day, he took part in the opening ceremony for a traditional sugar refinery, continuing to encourage the members.

Shin’ichi returned to Naha, the capital of Okinawa, on February 6. There, he attended a general meeting for three university groups and also suggested establishing in Okinawa one of the first high school groups in Japan.

On February 8, he attended a general meeting celebrating 20 years of kosen-rufu in Okinawa, where he called out to the members: “I hope you
will steadily strive to make Okinawa a model of happiness and peace, stirring a powerful ground-swell of peace that spreads to the entire world!” (NHR-19, 61).

On February 9, Shin’ichi visited the city of Nago. He participated in the Yambaru Festival of traditional arts and had a discussion with the elementary, junior high and high school members who had performed. He emphasized that because Okinawa experienced the horrors of war, they had a vital mission to realize peace. He encouraged the members to keep a rainbow of hope in their hearts while advancing in high spirits. 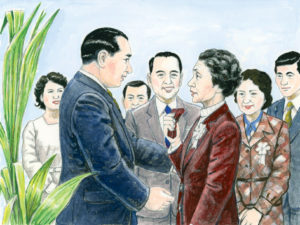 Refusing to Be Beaten Is Itself Winning

In February 1974, Shin’ichi Yamamoto visited Okinawa to encourage the members there. On his first visit to Miyakojima, he participated in a tree-planting ceremony, where they planted a palm tree in honor of Morimasa Ibe, who had been a group leader there in the early days of the Soka Gakkai’s movement. Shin’ichi warmly encouraged Mr. Ibe’s widow, Toki.

The prejudice against the Soka Gakkai among the islanders was very strong. When Mr. Ibe tried to hold a discussion meeting, his neighbors would sometimes stand outside and beat on metal tubs to disrupt the gathering. Nevertheless, he remained determined to enable his fellow residents to become happy, and he refused to give up. As long as we are firmly resolved, no barrier can hold us back. Eventually, Soka Gakkai membership on the island grew to about 30 households, and a group was established on the eastern side of the island.

But then in July 1967, Mr. Ibe caught a cold that led to complications and then to his sudden death. He was only forty-six and in his prime. … Toki didn’t know what to do. Influenced by traditional island beliefs, her neighbors said it was because she and her husband worshiped “mainland gods,” seizing on Mr. Ibe’s death to step up their attacks on the Soka Gakkai. Toki was shunned by many in the community, and her children were bullied at school. Shedding bitter tears, Toki resolved that she would not be defeated. …

She worked her fingers to the bone as she persevered in carrying out her Buddhist practice, aiming to realize her husband’s dream of bringing happiness to Miyakojima.

Then, at the memorial service, she received the news that President Yamamoto was to plant a tree in honor of her husband. She was overcome with emotion. After the ceremony, Shin’ichi said to her with warmth and conviction, “I know how hard it’s been for you.”

It was all Toki could do to hold back tears. Shin’ichi continued: “I know things must still be very difficult, but you have already triumphed. Refusing to be beaten is itself winning. Please think of this tree as your husband and live each passing year filled with hope together with your children. I know your husband is looking after you. If you remain true to your faith to the very end, you will definitely become happy. This life is a great drama designed for that purpose.”

“You’ll be fine,” Shin’ichi said. “Don’t worry about anything. You have the Gohonzon. And I’ll be chanting for you.”

Wiping away her tears, Toki lifted her face and nodded, her eyes shining with renewed determination. … Life was still hard for her and her family, but Toki was no longer afraid. A brilliant rainbow of hope blazed in her heart. (NHR-19, 45–47)

Politics and economics are always most clearly reflected in the daily lives of the people. The truth is to be found not in the remarks of intellectuals and critics but in the testimony of ordinary citizens. As an old Japanese saying goes: “The voice of the people is the voice of the heavens.” (NHR-19, 4)