The “Rainbow of Hope” chapter in volume 19 of The New Human Revolution details Shin’ichi Yamamoto’s first visit to Okinawa Prefecture since its reversion from the U.S. to Japanese sovereignty [in May 1972; Shin’ichi’s visit took place in February 1974]. Having overcome deep-rooted prejudice and lack of understanding toward the Soka Gakkai, the members in Okinawa had been vigorously promoting the kosen-rufu movement in their communities. In addition to the main island of Okinawa, Shin’ichi also visits outlying islands, aiming to ignite “a flame of inspiration in the heart of each member in Okinawa that would spur them to dynamic growth.”[1]

As if to celebrate the solid bond between Shin’ichi and the Okinawa members, rainbows adorn the sky during each of his visits to the islands of Ishigaki and Miyako, as well as to the city of Nago on the main island. He draws on these moments in which rainbows stretch across the sky like a fine masterpiece to encourage the members:

No matter how deep the darkness, no matter how fiercely the winds blow, I hope you will keep a rainbow of hope in your hearts and advance in high and indomitable spirits.

A rainbow is a symbol of hope, ideals and lofty intentions. And faith is the source of all of these.[2]

Particularly when we face difficult times, we must hold on to a rainbow in our hearts as we create “a rainbow of hope” in the hearts of others—this is the sincerity of Okinawa and the spirit of Soka.

This year, in this month of May, Soka’s “rainbow of encouragement” has cast its hues ever more brilliantly, dispelling the darkness society currently faces.

Aiming toward May 3, Soka Gakkai Day, the youth division launched a collaborative song-writing project called “Utatsuku.” From the youth division’s desire to find a way to inspire hope amid the COVID-19 coronavirus pandemic, they connected virtually with participants from different countries and generations to create a new song called “Step Forward.”[3]

The lyrics express the youth’s shared wish to build a rainbow of hope in people’s hearts:

From May 5 until June 30, the future division in Japan is being encouraged to take part in a new project called “Rainbow Challenge Toward 2030.” As children are currently spending a lot of their time at home, the project is an opportunity for them to develop further through taking on seven challenges. One of these is to find out more about their family’s history in terms of faith. This is also a great opportunity for parents to share with their children their personal turning point in understanding the mentor-and-disciple relationship and the history of their family’s activities to promote kosen-rufu.

In the “Rainbow of Hope” chapter, Shin’ichi comments on the effort required to nurture children’s lives: “It is by getting actively involved in our children’s lives, fostering them with great care and doing our utmost to teach them what they need to know that they grow.”[4]

The future development of kosen-rufu begins from creating a rainbow of Soka successors in our families.

The 21st Century—A Century of Life

Volume 19 of The New Human Revolution also details Shin’ichi’s visits to various overseas universities, including the University of Panama, the National University of San Marcos in Peru and the University of California, Los Angeles (UCLA). These visits are based on his conviction that universities are a nation’s foundation and that academic exchanges with universities around the world will develop into “a great, everlasting river of peace and culture.”[5]

On April 1, 1974, at UCLA, Shin’ichi delivers his first official lecture at a university outside of Japan. In this historic lecture, titled “Toward the Twenty-first Century” (also referred to as “The Enduring Self”), Shin’ichi declares that “the 21st century must be a century of life, a century in which life is valued to the utmost.”[6]

Grounded in the Buddhist philosophy of life, his talk highlights his characterization of the essential nature of contemporary civilization as being ruled by desires and attachments, and provides important guidelines for all humanity as we face the myriad challenges of the 21st century.

As disciples of Ikeda Sensei, let us deeply take to heart the fact that the driving force for his endeavors in educational exchange has always been his sense of pride as a graduate of “Toda University,” where he received a broad and extensive education from second Soka Gakkai President Josei Toda.

In the “Sunlight” chapter, in conversation with youth division representatives in the U.S., Shin’ichi declares:

I can assert that Toda University was the best university in the world. I believe that, as an honor student of that university, it is my responsibility to widely demonstrate that fact.[7]

Before delivering his lecture at UCLA, Shin’ichi addresses President Toda in his heart: “Today, as your representative, … I’m going to proclaim our Soka philosophy to the world. Please witness your disciple in action.”[8]

Through his ceaseless actions, Shin’ichi is committed to showing that Toda University—a university without even a single building—is indeed the “best university in the world.” These efforts, which are based on a sincere wish to celebrate his mentor, bear fruit in a total of 32 invitations to lecture and the conferral of 396 honorary degrees and titles from universities and institutions around the world.

This year marks the 70th anniversary since the lectures at Toda University began, and this month [May 2020] we also mark the 45th anniversary of the conferral of Sensei’s first honorary doctorate from Moscow State University.

“When Shin’ichi spoke of being Mr. Toda’s disciple, he glowed with unsurpassed pride and joy.”[9] Indeed, the greatest source of courage and joy is to be found in our actions to promote our mentor’s magnificent accomplishments.

The Significance of the Antiwar Publication Project

In November 1972, at the Soka Gakkai Headquarters General Meeting, Shin’ichi had called on the youth:

The people of every nation in the world have a right to live. … Now is the time for the emergence of a movement of people awakened to that inherent right. I am counting on the youth division to initiate such a movement.[10]

This speech inspired the youth to launch an antiwar publication project. The Okinawa youth members were the first to develop a plan to implement this, and they adopted a resolution at the Okinawa Youth Division General Meeting in May 1973 that included a project to publish accounts of people’s wartime experiences.

During his visit to Okinawa in February 1974, Shin’ichi gives advice to the chair of the Okinawa youth division’s antiwar publications committee, emphasizing that if Buddhist philosophy becomes “an actual part of the lives of world leaders and people everywhere, war will cease to happen, and such problems as poverty, hunger, disease and violations of human rights will no longer go unaddressed.”[11]

He also stresses that the right to live must be backed up by a sound philosophy and that Buddhism itself teaches the fundamental principle of the sanctity of life.

In June that year, the youth division of Okinawa published Uchikudakareshi Urumajima (War-torn Urumajima)[12] as the first volume of the Soka Gakkai youth division’s antiwar publications. Later, the project spread to Hiroshima and Nagasaki, and other prefectures around Japan.

Since President Toda’s declaration calling for the abolition of nuclear weapons in 1957, it has been the youth division who have generated a growing tide of activity based on Buddhist humanism in order to realize their mentor’s vision.

One example of this can be seen in a proclamation presented to SGI-USA’s youth division by Allegheny County Council in Pennsylvania [in 2008] in appreciation for their social contribution, citing that, together with Sensei, the youth members of the SGI bear the mission and responsibility to establish a humanistic philosophy in society.

Let us cherish the youth division who bear such a great mission and expand the network of support and encouragement spearheaded by the youth. This is the concrete means to put into practice the following guidance from our mentor:

The great endeavor of realizing peace can only be achieved when the younger generation stands up. To build everlasting peace, youth and their potential must be fostered.[13]

Translated from the May 27, 2020, issue of the Seikyo Shimbun, the Soka Gakkai’s daily newspaper. 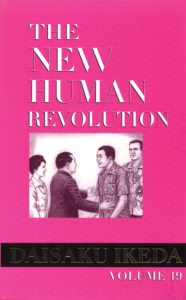 Rainbow of Hope
In February 1974, Shin’ichi visits Okinawa for the first time since the islands were reverted to Japanese administration. He visits Ishigaki and Miyako islands, as well as Nago City in northern Okinawa.

Song of Triumph
Shin’ichi travels to three countries in North, Central and South America. In Panama, he meets with President Demetrio Basilio Lakas. In Peru, he promotes cultural and educational exchanges.

Sunlight
Shin’ichi delivers his first overseas lecture at the University of California, Los Angeles (UCLA). He attends various meetings including the All-America General Meeting and focuses on training the youth.

Treasure Tower
The youth divisions of Okinawa, Hiroshima, Nagasaki and other prefectures publish testimonials of those who experienced World War II, totaling 80 volumes and creating waves of inspiration across the country. Shin’ichi attends a discussion meeting for members with visual impairments.

Courageous Propagation for the Peace of the Land