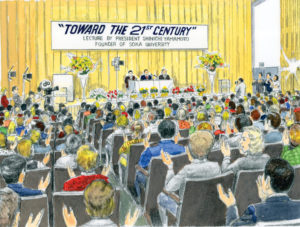 On March 28, 1974, Shin’ichi Yamamoto departed from Peru bound for Los Angeles, with a brief layover in Mexico. On March 29, he talked with representative youth division members and young interpreters at the Malibu Training Center.

On April 1, Shin’ichi delivered a lecture at the University of California Los Angeles, titled “Toward the Twenty-first Century” (also referred to as “The Enduring Self”). He declared in his lecture that the 21st century must be a century of life, offering the Buddhist view of life. His ideas were very well received by the audience. This was the first lecture he had delivered at an academic institution outside Japan.

On April 2, Shin’ichi held a service commemorating the 16th anniversary of the death of his mentor, second Soka Gakkai President Josei Toda, at the Soka Gakkai’s America Headquarters in Santa Monica, California. This was the first memorial to be held for President Toda outside Japan. On this occasion, Shin’ichi explained seven key characteristics of human revolution, including health and youthfulness.

The next day, he attended the San Diego Convention on April 6. On April 7, he participated in the 11th All-America General Meeting, encouraging the members to uphold “the Buddhist philosophy of social justice and human revolution, forge strong selves and realize genuine peace in the United States, the land of liberty” (The New Human Revolution, vol. 19, p. 215).

During his visit, Shin’ichi did his utmost to offer the warm sunlight of encouragement to each person he encountered, especially those making efforts behind the scenes. Prior to his return to Japan, he suddenly arranged for a stopover in Hawaii to meet with a pioneering member and friend who had fallen seriously ill. 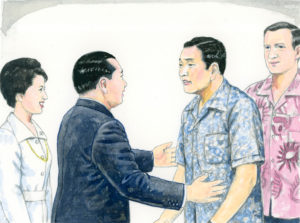 The Soka Gakkai Shines With the Mentor’s Sincerity

In April 1974, Shin’ichi Yamamoto traveled to Hawaii to visit Pacific Territory Leader Hiroto Hirata, who was recovering from a heart attack.

Hiroto Hirata was discharged from the hospital before Shin’ichi Yamamoto arrived in Hawaii, but he still had not completely recovered his health. On April 10, Mr. Hirata went to Honolulu Airport to welcome Shin’ichi. …

“Hello, there, Riki-san!” Shin’ichi said, calling out Mr. Hirata’s nickname as he hurried over to him and firmly shook his hand. Mr. Hirata, who had once weighed more than 220 pounds, was thin and frail looking. Embracing his friend, Shin’ichi said: “Riki-san, you mustn’t leave us yet! I was so worried. I’ve been chanting for you the whole time. But I’m glad you’re better. I’m so happy to see you.”

“Sensei …” was all Mr. Hirata could manage to say. … Momentarily rendered speechless with emotion, tears started to fall from his eyes.

Smiling warmly, Shin’ichi said to him: “Riki-san, everything comes down to chanting Nam-myoho-renge-kyo. This is the time for you to overcome your karma through faith and wholeheartedly resolve to dedicate your life to kosen-rufu. That will provide the momentum for changing your karma.”

When we make kosen-rufu our mission and strive for it with all our being, the great life force of a Bodhisattva of the Earth begins to pulse within us, enabling us to break the chains of karma. …

With tears streaming down his face, Mr. Hirata said: “I’m fine now. I’m sorry for causing you any worry. I’ll do my best. I’ll do my very best, I promise.”

Dressed in muumuus and aloha shirts, the other Hawaii members stood watching as Shin’ichi encouraged Mr. Hirata, their eyes also filled with tears. They were all deeply moved to witness Shin’ichi’s concern for one of them, realizing that this was the realm of mentor and disciple in the Soka Gakkai. Through Shin’ichi’s behavior they learned the essence of this profound relationship in Buddhism. (NHR-19, 228–30)

Kosen-rufu is another name for realizing lasting peace. Efforts to rebuild the Soka Gakkai in the aftermath of World War II stemmed from Josei Toda’s resolute determination to eradicate war. As such, praying and striving for peace is the essential spirit of the Soka Gakkai. (NHR-19, 231)