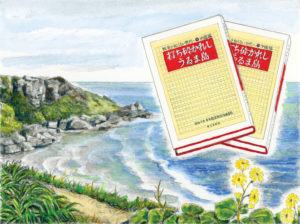 After returning to Japan, Shin’ichi Yamamoto attended the Nagano Prefecture General Meeting on April 26. On April 28, he traveled to Ishikawa Prefecture for a general meeting commemorating 20 years of kosen-rufu in the Hokuriku Region.

Around this time, progress was being made by the Soka Gakkai Youth Division Antiwar Publishing Committee to complete final edits of wartime experiences to be published in book form. Shin’ichi wanted the youth to carry on the struggle to protect the universal right to live that he had inherited from second Soka Gakkai President Josei Toda’s “Declaration for the Abolition of Nuclear Weapons.”

The Okinawa Youth Division was the first in Japan to publish a book of accounts of people’s wartime experiences. When the youth division members went to interview war survivors, they often found that the victims were so emotionally scarred from their experiences they were too overwhelmed with grief to speak. Through the sincerity and earnestness of the youth, however, to ensure that these stories were recorded for posterity, many survivors moved past their sadness to tell their stories.

By 1985, 80 volumes of wartime survivors’ experiences had been published, which were collected by people in every prefecture of Japan. These antiwar publications, fueled by a call for peace and the dignity of life, earned widespread acclaim from leading thinkers.

On May 26, Shin’ichi made a surprise appearance at a gathering for the Jizai-kai, the Soka Gakkai training group for the visually impaired. He wanted to wholeheartedly encourage those who had overcome numerous hardships. Shin’ichi encouraged the members, saying, “Happiness comes from bringing the sun of joy to rise within our own heart, from building a shining treasure tower in our innermost depths” (The New Human Revolution, vol. 19, p. 313). He then chanted Nam-myoho-renge-kyo together with the members, praying for the happiness of each of them. 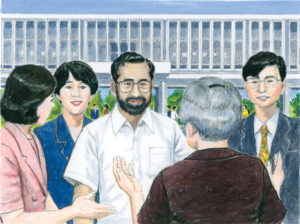 A Mission for World Peace

Mitsuko Kaneko was 14 years old when Hiroshima was devastated by the atomic bomb in August 1945, leaving her badly burned and exposed to radiation. In spite of her suffering, she lived her life to the fullest, marrying and having a daughter.

At around three years old, her daughter, who was sickly and frail, began to trip and fall frequently. They took her to a doctor, who diagnosed her with serious sight loss, very close to blindness. It’s not fair! Why should my daughter have to suffer? Mitsuko thought. Overwhelmed with grief, she cursed her fate, wondering: How much more suffering can the atomic bomb inflict on us?

At about that time, a women’s division member in her neighborhood told her about Nichiren Buddhism, and Mitsuko joined the Soka Gakkai out of her fervent wish to do some-thing to help her daughter. The idea of changing one’s karma and working for the kosen-rufu movement, which aims to realize lasting peace for all humanity, struck a deep chord in her, and she threw herself wholeheartedly into Soka Gakkai activities. About a year after she began practicing, the doctor who had initially diagnosed her daughter asked her in surprise if she had taken the child to be treated at some other hospital. It seemed that the little girl’s sight was returning.

As Mitsuko continued practicing Buddhism, she saw that her mission as a victim of the atomic bomb was to communicate the horror of nuclear weapons to future generations and help build an everlasting foundation for world peace. She became a member of a group of atomic bomb victims who shared their experiences with others, such as high school students on class trips to Hiroshima. …

In summer 1993, Indian philosopher and human rights activist Dr. N. Radhakrishnan, director of the Gandhi Smriti and Darshan Samiti (Gandhi Memorial Hall), visited Hiroshima, where he met Mitsuko Kaneko. He asked her, “What do you think of America, which dropped the atomic bomb on Hiroshima?”

She replied honestly: “There was a time when I hated America for what it had done. But I eventually realized what a waste it is to live in bitterness.”

She then added with resolve: “What we choose to dedicate our lives to is very important. I am dedicated to working for the happiness of all people and realizing peace in the world.”

Dr. Radhakrishnan was deeply impressed that Mitsuko had overcome her hatred and was devoting her life to world peace. “That is wonderful!” he said. He then turned to a youth division member standing nearby and remarked: “There is a source of indestructible strength in this woman’s heart. The hope of the world resides there.” (NHR-19, 285–87)

What we learn from each encounter and occurrence is very important. Our ability to empathize with others starts with having the capacity to imagine their sufferings. Consideration for others is the fruition of the ability to put ourselves in their shoes. (NHR-19, 311)

Excerpts From Nichiren’s Writings in Volume 19