This installment, published in the May 20, 2020, issue of the Seikyo Shimbun, focuses on passages from Nichiren Daishonin’s writings that Ikeda Sensei discusses in volume 19 of The New Human Revolution.

“Never seek this Gohonzon outside yourself. The Gohonzon exists only within the mortal flesh of us ordinary people who embrace the Lotus Sutra and chant Nam-myoho-renge-kyo.” (“The Real Aspect of the Gohonzon,” The Writings of Nichiren Daishonin, vol. 1, p. 832)

The Gohonzon Is the Clear Mirror Reflecting Our Lives 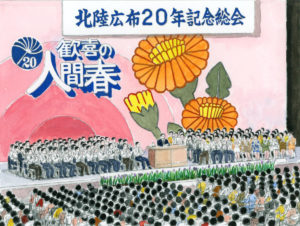 On April 28, 1974, a day marking the anniversary of the establishment of Nichiren Daishonin’s teaching, Shin’ichi Yamamoto spoke about the significance of the Gohonzon to the members of Hokuriku Region.

The Buddha does not exist in some far distant place separated from our lives. And people are not servants of gods or deities. Our lives are originally endowed with the supremely noble state of Buddhahood; they are entities of Nam-myoho-renge-kyo. It thus follows that our lives themselves are the object of fundamental respect. And the Gohonzon, the mandala inscribed by Nichiren, serves as a clear mirror to reflect and draw forth the Nam-myoho-renge-kyo within. …

Nichiren Buddhism, which regards life as the object of fundamental respect, is the ultimate teaching of the sanctity of life. As such, it is the source of a new humanism.

People often advocate peace and the sanctity of life. But human life is too easily trampled on and sacrificed in the name of country, ideology and racial or religious differences, or as the result of hatred, jealousy and discrimination. No matter how much people may assert that life is precious, if they do not base themselves on the fundamental belief that life deserves the highest respect, then it is likely that life will become but a means to an end. …

The Buddhist teaching that the state of Buddhahood exists in our lives and that life is the object of fundamental respect is a solid foundation for establishing the principle of the sanctity of life and gives rise to a philosophy of peace and humanism. (The New Human Revolution, vol. 19, pp. 244–45)

“There should be no discrimination among those who propagate the five characters of Myoho-renge-kyo in the Latter Day of the Law, be they men or women. Were they not Bodhisattvas of the Earth, they could not chant the daimoku.” (“The True Aspect of All Phenomena,” WND-1, 385)

All People Are Bodhisattvas of the Earth With a Profound Mission 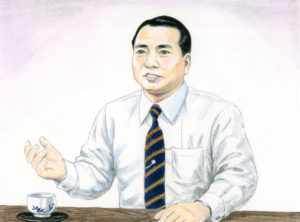 In February 1974, Shin’ichi speaks with two leaders in Okinawa about the importance of awakening to their mission for kosen-rufu.

“You may look at your fellow members who seem to be suffering from such problems as illness or financial hardship and think that they could not possibly be Bodhisattvas of the Earth. Yet, nobody can avoid problems. The point is that once we awaken to the mission of kosen-rufu and begin to engage in it, the life state of a Bodhisattva of the Earth and the great life state of the Buddha well up powerfully from the depths of our being.

“Buddhas are never defeated by misfortune or problems. They transform all their sufferings into joy, expand their state of life and undergo their human revolution. And it is through this process that they change their karma.”

In volume 19 of The New Human Revolution, Shin’ichi Yamamoto says that the essence of the Soka movement “is the altruistic spirit of caring for others. Establishing this spirit in people’s hearts is the key to realizing world peace. If people think only of their own benefit and self-interest … society will be thrown into chaos” (p. 61).

Research in psychology has found that faith-based altruism may be key in helping people build the resilience to win over life’s challenges. With the recent coronavirus pandemic and ongoing social movements, many people have been reconsidering their views on life and humanity.

Buddhism teaches that by bringing forth our energy and life force, we can break free from our confined lesser selves, readily transforming our self-centeredness and moving toward a concern for the greater good.