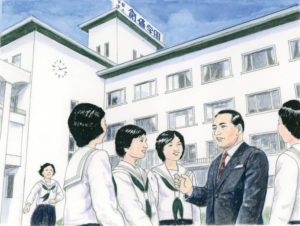 On April 11, 1973, Shin’ichi Yamamoto attended the first entrance ceremony for the Soka Girls Junior and Senior High Schools in Katano City, Osaka. At the ceremony, he conveyed his hallmark guidance that “your own happiness can never be built on the misfortune of others” (The New Human Revolution, vol. 17, p. 109).

Shin’ichi also played tennis and table tennis with the students. As he did so, he engaged them in dialogue and encouraged them, determined to warmly foster these Soka students whom he saw as the hope for the 21st century.

The students responded to Shin’ichi’s guidance to establish “new, dynamic traditions” by taking the initiative to greet local residents on their way to school, decorating nearby train stations with flowers and building trust and understanding within the local community.

Despite Shin’ichi’s hectic schedule, he created as much time as he could to visit the newly founded school. At times, he stood at the entrance with the school’s principal to greet the students as they arrived on campus, offering hearty encouragement to the students.

At the first graduation ceremony in 1976, Shin’ichi remarked to the students, “I hope you will remain loyal and dependable friends for life” (NHR-17, 170).

He repeatedly said to graduating students: “Feel free to come and see me whenever you like. I’ll always be here for you” (NHR-17, 171). 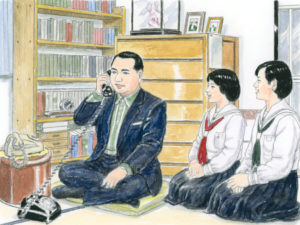 For My Cherished Students

While he was there, the telephone rang. Shin’ichi immediately picked up the receiver. “Hello, Tsukimi Dormitory, Shin’ichi Yamamoto speaking. How may I help you?”

“What? Mr. Yamamoto?” It was a mother calling for her junior high school daughter. …

“Oh! Sensei! Thank you for everything you’ve done for my daughter!” she said.

Shin’ichi asked one of the caretakers to go call the student to the phone, and in the meantime continued speaking to the mother: “I know you must feel lonely with your daughter away at school, but she’s doing her very best. The Soka Girls Junior and Senior High Schools are giving her a first-rate education. When she’s in her forties and fifties, the fruits of this fine environment will become apparent. Please relax and leave it to us.”

Shin’ichi wanted to put the mother’s mind at ease. When we feel confident, we are energized and empowered. …

Before long, the junior high student arrived in the caretakers’ room. As soon as she had finished speaking and replaced the receiver in the cradle, the phone rang again. Shin’ichi answered it. This time it was from the younger sister of a senior high school student. “Caretaker Yamamoto speaking. I’ll get her, so please wait just a moment.” …

The student said to her younger sister: “Do you know who you were just speaking to on the phone? Yamamoto Sensei! Really, I’m telling you the truth!”

“It doesn’t sound like she believes you!” Shin’ichi said. Laughter filled the room. …

Shin’ichi was especially concerned about the welfare of the students residing in the dormitory or boarding in homes in the community. Whenever he heard about a student whose mother or father had fallen ill and had to be hospitalized, he imme-diately met with the student and encouraged her, as well as calling her family to encourage them, too.

He always acted swiftly and appropriately. He never stood on ceremony or behaved in an authoritarian manner; rather, he consistently gave top priority to interacting with the students on a human, personal level. (NHR-17, 154–55)

Our worth as a human being is determined by whether we live solely for ourselves or strive to realize happiness for both ourselves and others. (NHR-17, 139)

Volume 17: Chapter Three—Citadel of the People