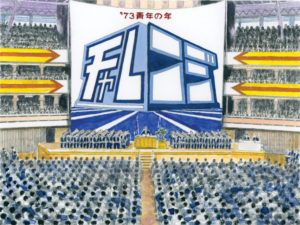 This chapter opens at the beginning of 1973, designated by the Soka Gakkai as the Year of Study. This marked the start of the “second chapter of kosen-rufu.” Shin’ichi Yamamoto explains that Buddhist ideals will serve as the inspiration for constructing a society and culture that upholds compassion and reverence for life.

While 1973 was designated the Year of Study, it was also considered the Year of Youth. Shin’ichi explained that walking the path of mentor and disciple is most important in initiating a multi-faceted movement that impacts society.

Shin’ichi expressed that his main focus at this start of 1973 was to strengthen the kosen-rufu movement in the Tokyo area as the Soka Gakkai’s “main bastion.”

In January, Shin’ichi participated in a number of commemorative photo sessions and thoroughly encouraged the members in various wards of Tokyo.

In addition, with the desire to develop each locale into a castle of capable people, he established training groups in different parts of Tokyo. For example, in Nakano Ward, he formed the “Nakano Fellowship Group.”

Moreover, beyond the 23 wards of Tokyo, he also focused on the Tokyo No. 2 area, comprising suburban communities located on the outskirts of western Tokyo. That same month he attended a territory leaders meeting there.

Shin’ichi held high expectations for these youth who had stood up to create a humanistic society. 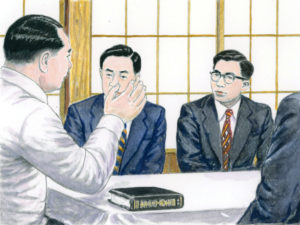 Following the Path of Mentor and Disciple

At the leaders meeting, young men’s division leader Isamu Nomura asked Shin’ichi: “With the beginning of the second chapter of kosen-rufu, the Soka Gakkai will initiate a multifaceted movement that reaches out to society. What should we bear in mind as we head in that direction?” …

Shin’ichi answered unhesitatingly, “Following the path of mentor and disciple.”

Shin’ichi’s reply was not the sort of answer Mr. Nomura had been expecting. The young man had thought that, since the Soka Gakkai’s aim was to become a movement that touched all aspects of society, its first task was to foster talented individuals in various fields.

Noticing the look of puzzlement that crossed Mr. Nomura’s face, Shin’ichi said: “You’re wondering what mentor and disciple has to do with it, aren’t you? It’s like the relationship between centrifugal and centripetal force.”
Shin’ichi’s voice was gentle yet firm.

“Recently, youth division members have been expressing their resolve to demonstrate their abilities in society, and they are becoming more aware of the importance of social contribution. That’s a wonderful thing. But if you forget the fundamental goal of kosen-rufu and become obsessed with achieving renown and success, you are likely to end up making light of the realm of faith. …

“The path of mentor and disciple is crucial to walking the true path of humanity and Buddhism.” (The New Human Revolution, vol. 17, pp. 8–9)

No matter how deep the darkness, when the sun rises, everything is bathed in light. That’s because the sun is always blazing brightly. Please be like the sun, no matter what. (NHR-17, 55)

To engage in struggle is to take on our human revolution. The joy and elation we experience after we succeed is greater than anything. (NHR-17, 76)