On March 11, 2020, exactly nine years since the Tohoku earthquake and tsunami, Ikeda Sensei published an essay titled “Winter Always Turns to Spring.” At the end of the essay, he calls on us to once again engrave in our hearts the famous passage from Nichiren Daishonin’s treatise “The Opening of the Eyes,” which reads:

Although I and my disciples may encounter various difficulties, if we do not harbor doubts in our hearts, we will as a matter of course attain Buddhahood. Do not have doubts simply because heaven does not lend you protection. Do not be discouraged because you do not enjoy an easy and secure existence in this life. (The Writings of Nichiren Daishonin, vol. 1, p. 283)

This passage is also quoted in the “Citadel of the People” chapter of volume 17 of The New Human Revolution, where participants at the Soka Gakkai Headquarters Leaders Meeting of April 1973 read it aloud together. During the previous month’s headquarters leaders meeting, Shin’ichi Yamamoto had in fact introduced the same passage as he declared: “This is the true meaning of faith. Please engrave these words in the depths of your being throughout your life.”[1]

Now, all the more, as the world faces immense challenges and difficulties, let us instill Nichiren’s absolute conviction deep in our lives, earnestly pray for peace in our society and the happiness of humanity, and take self-driven action with wisdom and compassion.

The year 1973 marked the full-fledged start of the second phase of kosen-rufu [an age in which society comes to accord with the principles of Buddhism]. It was designated as the Year of Study and was also considered the Year of Youth. Making an effort to study Nichiren’s teachings and deepen our understanding of Buddhist principles is essential for fresh development. This, along with youth enthusiastically taking their place at the forefront of our movement, is the key requirement for advancing kosen-rufu in any age.

At an occasion addressing representatives of the young men’s division, Shin’ichi shares his high hopes for the youth, “Without self-motivated determination and willingness to take action, one cannot be said to be a champion of the second chapter of our movement.”[2] Activities for kosen-rufu are not obligations, nor something we take part in passively because someone has asked us to. Rather, the important thing is that we stand up and challenge ourselves based on our vow. Precisely because they are self-driven, our actions for kosen-rufu enable us to experience true joy and personal growth.

Shin’ichi begins the year by focusing his energies on encouraging members in Tokyo, the “main bastion” where the Soka Gakkai Headquarters is located. As described in the “Green Fields” chapter, he then shifts his focus to strengthening the organization in other regions and prefectures across the country. Shin’ichi is keenly aware of the necessity for each region to take on a more autonomous approach, developing their own ideas and activities in accord with local needs and conditions. Toward this end, he proposes instituting the new position of prefecture leader within the Soka Gakkai, and by September 1973, these appointments have been made nationwide. From then on, each prefecture begins taking steps to advance kosen-rufu in a way that draws forth and capitalizes on their strengths and unique qualities.

In addition, the Soka Gakkai’s European Conference was established in May 1973, heralding the start of the second phase of world-wide kosen-rufu. This was followed by the formation of the Pan-American League in August and the Southeast Asian Buddhist Cultural Council in December. The Soka Gakkai Inter-national was then established two years later, on January 26, 1975.

In all these ways, at the start of the second phase of kosen-rufu, Shin’ichi steadily takes important measures to further the movement both at the local and global levels. In time, the seeds sown based on his single-minded determination to make it a decisive year blossom gloriously.

To mark the opening of the second phase of kosen-rufu, the youth division in Japan launch a number of activities, including a nationwide petition drive calling for the abolition of nuclear weapons. When a youth leader asks Shin’ichi Yamamoto what they should bear in mind as the Soka Gakkai begins to initiate activities that reach out to the general public and society at large, Shin’ichi replies, “Follow the path of mentor and disciple.”[3] He continues:

Shin’ichi goes on to describe the mentor-disciple bond shared by first and second Soka Gakkai Presidents Tsunesaburo Makiguchi and Josei Toda, adding, “I also dedicated myself wholeheartedly to Mr. Toda, protected him and fulfilled my mission as his disciple.”[5]

Volume 10 of The Human Revolution contains another passage stressing the importance of remaining true to the path of the oneness of mentor and disciple. Here, this is explained as the disciple grasping the mentor’s innermost intention and making it their own, such that it pulses in the disciple’s life and becomes an intuitive part of their actions, manifesting spontaneously. The passage concludes, “This is a difficult process that can be accomplished only through strong faith.”[6]

The Soka Gakkai is currently involved in a wide range of activities to promote peace, culture and education, including SOKA Global Action 2030 initiated by the youth division in Japan. Precisely because we are promoting such a multifaceted movement, we must never forget the fundamental path of mentor and disciple.

Additionally, the “Main Bastion” chapter of volume 17 of The New Human Revolution describes the path of mentor and disciple as “strict and demanding,”[7] making it all the more essential for us to be thoroughly committed to engaging in practice for oneself and others.

Shin’ichi never stops conducting an internal dialogue with President Toda: “I am always asking myself what he would do in any given situation, what he would say to me if he saw what I was doing.”[8] We, too, can make great strides in our human revolution through regularly engaging in conversation with our mentor in our hearts.

The Century of Women

Addressing a young women’s leader during the Soka Gakkai’s divisional leaders meeting on New Year’s Day of 1973, Shin’ichi Yamamoto passionately declares: “The 21st century will be the Century of Women.”[9]

His vision is for women in society to be able to “develop their individuality, demonstrate their creative abilities and actively engage in cultural, political and social issues” as “well-rounded individuals with a wide array of talents.”[10] It is this conviction that leads him to establish a school system in Kansai equipping women with an education that would enable them to act upon their intense desire for peace and play key roles in society, as well as on the national and global scale. The “Hope” chapter goes on to detail the launch of the Soka Girls Junior and Senior High Schools (present-day Kansai Soka Junior and Senior High Schools).

At their entrance ceremony, he gives a speech as the schools’ founder, sharing that through their daily endeavors to live in accord with their ideals, the students were sure to create wonderful traditions that will flourish and be passed on to future generations. Engraving these words in their hearts, the steady efforts made by those first batch of students lead to the building of beautiful school traditions that have since been passed down through successive classes.

As is later chronicled in the “Vow” chapter of volume 30, in December 2000, during the headquarters leaders meeting held in conjunction with a Kansai women’s general meeting to herald the dawn of the 21st century, Shin’ichi declares: “The times are clearly changing. Societies and organizations that respect and value women will flourish from now on.”[12]

There can be no doubt that the wellspring for making the 21st century a “century of life” in the truest sense is to be found in the power of women and their immense capacity to love peace and cherish life above all.

Translated from the March 25, 2020, issue of the Seikyo Shimbun, the Soka Gakkai’s daily newspaper. 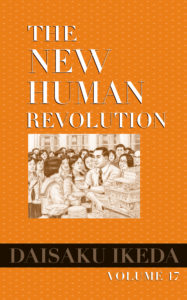 Main Bastion
From the start of 1973, Shin’ichi Yamamoto devotes his efforts to promoting kosen-rufu in Tokyo, home of the Soka Gakkai Headquarters. He holds commemorative photo sessions in various wards and also establishes fellowship groups (Kyodai-kai).

Hope
On April 11, Shin’ichi attends the first entrance ceremony of the Soka Girls Junior and Senior High Schools in Kansai.

Citadel of the People
Shin’ichi revisits the Tokyo wards of Arakawa, Sumida, Ota and Toshima—significant places from his youth. On May 8, he sets off on a trip to Europe.

Green Fields
Shin’ichi visits the local members in Fukui and Gifu prefectures, encouraging them to develop life states as expansive as the green fields for which the areas are famous.