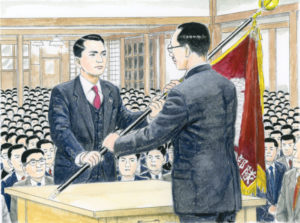 One day in late April 1973, while Shin’ichi Yamamoto was walking in front of the Seikyo Shimbun building, he ran into two women from Arakawa Ward, Tokyo. Talking with them brought back memories of the summer of August 1957, when he carried out a weeklong guidance tour in Arakawa.

One month prior to that, on July 3, 1957, he had been arrested in Osaka on false charges of election violations. [He was later exonerated of all charges.]

Soon after his release on July 17, he went to Arakawa Ward and initiated waves of propagation. In a brief span of a week, he led a 10 percent increase in the Soka Gakkai’s membership together with Arakawa members.

On April 22, 1973, a Soka Gakkai Headquarters leaders meeting was held at the Nihon University Auditorium in Sumida Ward, where Shin’ichi Yamamoto had taken leadership as the young men’s First Corps leader in 1953. This was also where Josei Toda had announced his vow to achieve 750,000 member-households upon becoming the second Soka Gakkai president.

At the April 1973 leaders meeting, Shin’ichi asked the youth of Sumida to be courageous lions who dedicate their lives to the great vow of kosen-rufu.

As he continued visiting other wards through-out Tokyo, such as Shibuya, Ota and Toshima, he generated fresh momentum toward a new departure for each area.

On May 8, Shin’ichi departed for Europe. In France, he supported the establishment of the Soka Gakkai European Conference as a means to reinforce the solidarity and cooperation of members in European countries.

In the United Kingdom, Shin’ichi resumed his dialogue with Arnold J. Toynbee, which had begun a year earlier. On his way back to Japan, he had a brief layover in Amsterdam, during which he attended an impromptu outdoor discussion meeting. 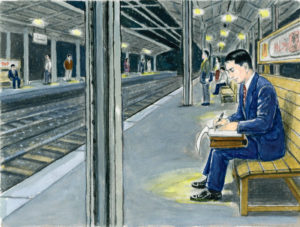 In January 1953, Shin’ichi Yamamoto was appointed the young men’s First Corps leader. He fought with all his might toward his mentor’s grand goal of building a Soka Gakkai with 750,000 households.

At the time, Shin’ichi was also dedicating himself fully to keeping Josei Toda’s businesses running, and he was extremely busy at work. Moreover, within the Soka Gakkai, he not only served as young men’s division First Corps leader, but was also the youth division chief of staff in charge of training the youth division as a whole. In addition, in April he was appointed acting chapter leader of Bunkyo Chapter. …

He thought: The real struggle starts now. Anyone can participate in Soka Gakkai activities if they have plenty of time. Genuine Buddhist practice means making time in an already packed schedule and struggling with all one’s might. I won’t retreat a step, and I won’t be defeated.

Intense determination is the source of limitless vitality and wisdom.

No adversity is a match for the firm resolve of those who are dedicated to giving their utmost for the sake of kosen-rufu.

Shin’ichi’s schedule was so full that he was unable to meet with members in person as much as he would have liked. He therefore used every spare moment to write them letters of encouragement. …

His earnestness and passionate commitment inspired and impressed the First Corps members to no end. Shin’ichi’s example became their highest goal and served as guidance in itself.

The First Corps developed steadily, and by the end of September 1953, it had reached a membership of more than 600, almost twice the size it had been when Shin’ichi became the corps leader in January. The members were pleased with this swift advancement, but in light of their final goal of 750,000 member-households, everything they had achieved thus far was only the beginning. … (The New Human Revolution, vol. 17, pp. 229–30)

Nichiren Daishonin writes: “Moreover, words and writing are your very body and mind. They are the ever-continuing body and mind of all living beings of the three existences” (“Questions and Answers on the Various Schools,” The Writings of Nichiren Daishonin, vol. 2, p. 18). Shin’ichi poured his entire being into the postcards he sent to the group leaders of the First Corps, striving to rouse their spirits. Some leaders received numerous messages from Shin’ichi, one after another. Touched by Shin’ichi’s efforts to help them break through their negativity, efforts they knew he was making in spite of his extremely busy schedule, the members resolved anew to fight and win no matter what.

The group leaders were invigorated. Their excitement spread to all the members, and a fresh wave of growth was initiated. (NHR-17, 231–32)

When you awaken to the mission of realizing kosen-rufu and engage in the struggle to do so, the great life force of the Bodhisattvas of the Earth begins to stir in your heart. That life force is powerful and invincible, and it elevates and broadens your state of being. (NHR-17, 270–71)