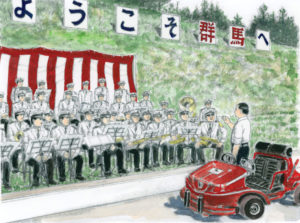 On June 5, shortly after returning from Europe, Shin’ichi Yamamoto visited Fukui Prefecture, which held a special place in his heart. It was an area wracked by disasters such as frequent earthquakes and typhoons, as well as having endured aerial bombardments during World War II.

At a prefecture leaders meeting, Shin’ichi firmly emphasized how reviving the land is driven by one’s courage and action, and that the time had come to carry out a “Fukui Renaissance.” He further encouraged the members to awaken to their mission as protagonists in ensuring the prosperity of their communities.

On June 7, Shin’ichi visited Gifu Prefecture to attend a prefecture leaders meeting as well as a culture festival. After watching an original play based on the Gujo Rebellion of 1754, in which the main character calls out, “As long as I have a drop of life left in me, I will keep fighting!” (The New Human Revolution, vol. 17, p. 304), Shin’ichi conveyed to the performers that this is the true Soka Gakkai spirit. He also visited the Gifu branch office of the Seikyo Shimbun, where he encouraged staff members and correspondents.

On June 10, Shin’ichi traveled to Ikaho, Gumma Prefecture, where he attended the Soka Gakkai Gumma Sports Meet, participated in a group photo session and encouraged Soka Gakkai members in the Gumma Symphony Orchestra. He expressed his hopes for Gumma Prefecture to lead the way for all other regions in Japan and to become a model of kosen-rufu.

On June 17, Shin’ichi visited Ibaraki Prefecture, then moved on to Hokkaido on the 25th. At a divisional representatives meeting, he proposed a new motto for the region: “Kosen-rufu starts from Hokkaido!” Shin’ichi’s unceasing efforts led to the unfolding of new verdant fields of kosen-rufu. 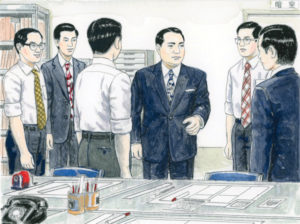 In June 1973, during his visit to Gifu Prefecture, Shin’ichi Yamamoto stopped by the local branch of the Seikyo Shimbun to encourage the staff and reporters.

Shin’ichi knocked and opened the door. He discovered several young people hard at work. Some were laying out the paper’s pages, while others were writing articles.

Perhaps because they had been so busy with their journalistic tasks in preparing for the prefecture leaders meeting, they all appeared to be worn out. …

Shin’ichi said: “You have a lot of things you need to accomplish. But because time is limited, you end up cutting back on sleep. That is certainly part of being young, but if you ruin your health in the process, all your efforts will come to naught.

“Lack of sleep is the cause of illness and accidents. If you get sick or cause an accident, you hurt not only yourself but also your families and fellow members, as well as society as a whole. …

Shin’ichi looked at the young men. Some had doubtful expressions, as if to say, “We’re far too busy to get all the sleep we need.”

Shin’ichi smiled and continued: “How can you get enough sleep? That’s what you want to ask, right?”

“The key is to give your all to every moment and to work efficiently. Many people go about their days absentmindedly or working in a halfhearted manner. But it is better to live with the spirit that now may be the last moment of your life and consistently do your best to get things done as quickly as possible.

“The energy to live this way comes from chanting earnestly. Mornings are especially important. If your life condition is strong, you will take action that creates value and develop the wisdom to increase your efficiency.

“It also helps to avoid watching television into the late hours of the night or keeping late hours generally. …

“Buddhism is reason. A Buddhist practitioner cultivates self-discipline. You are responsible for looking after your own health. Please take care of yourselves so that you can throw yourselves wholeheartedly into fulfilling your personal mission.” (NHR-17, 316–18)

Doubt is the source of fundamental delusion in life; it is what Buddhism calls fundamental darkness. It gives rise to anxiety and drags us into the depths of despair. Faith, meanwhile, is the struggle against the doubt that resides within our hearts. The power to win in that struggle comes from chanting Nam-myoho-renge-kyo. A true champion is therefore someone who puts prayer first. (NHR-17, 276)

Volume 17: Chapter Three—Citadel of the People

Excerpts From Nichiren’s Writings in Volume 17