This installment, published in the March 18, 2020, issue of the Seikyo Shimbun, focuses on passages from Nichiren Daishonin’s writings that Ikeda Sensei discusses in volume 17 of The New Human Revolution.

Courage Is the Essence of Victory 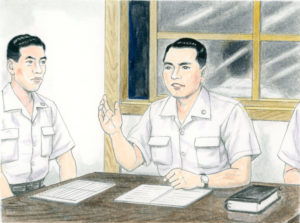 In August 1957, Shin’ichi Yamamoto shares the most essential point of advancing propagation with the members in Arakawa, Tokyo.

“After talking to a person just once, you may find yourself jumping to the conclusion that he or she isn’t receptive and that you’ll never get anywhere with them. But people’s minds are always changing, minute by minute, and you can definitely change them through your persevering efforts at dialogue.

“Sometimes, we need to consider whether our manner of speaking might be at fault. For example, if we tell a person with family problems that they can overcome illness through Buddhism, we’re not going to pique their interest. Likewise, it doesn’t do much good to tell a person struggling with illness that faith will help them succeed in business. Employing wisdom also means determining how to gain the other person’s understanding. …

“Our wisdom is essentially unlimited. It can make the impossible possible. And it arises from the firm resolve to achieve something. Earnest prayer is the mother of wisdom.”

Shin’ichi went on to say that wisdom needed to be accompanied by the courage to put it into action: … “The sword of the Lotus Sutra, which is the source of limitless wisdom, has no power if we are cowardly.

“I hope you will have the courage to challenge and overcome your personal weaknesses, such as the tendency to avoid the things you don’t like and to make excuses to justify your cowardice and negativity. Doing so is the key to your human revolution and to victory in all your endeavors.” (The New Human Revolution, vol. 17, “Citadel of the People” chapter, pp. 212–13)

“All disciples and lay supporters of Nichiren should chant Nam-myoho-renge-kyo with the spirit of many in body but one in mind, transcending all differences among themselves to become as inseparable as fish and the water in which they swim. This spiritual bond is the basis for the universal transmission of the ultimate Law of life and death.” (“The Heritage of the Ultimate Law of Life,” WND-1, 217)

Advancing Based on the Unity of Many in Body, One in Mind 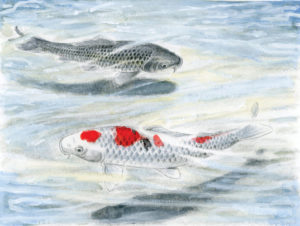 While visiting pioneer members in Fukui City, Fukui Prefecture, Shin’ichi Yamamoto expresses his appreciation and emphasizes the importance of unity among leaders.

Nichiren Daishonin calls on his followers to transcend “all differences among themselves”; in other words, to transcend the notion that their lives have nothing to do with the lives of others. This means, for example, overcoming the selfish, egoistic tendency to think only about one’s own interests without consideration for others or to view others with apathy or antagonism. When the hearts of people belonging to an organization are divided in this way, the true heritage of Buddhism cannot be transmitted. That’s why Nichiren repeatedly warns against such behavior in his writings.

“As inseparable as fish and the water in which they swim” refers to the profound awareness that our lives are inextricably tied to those of our fellow members; that our lives are deeply interconnected. It is a metaphor for the mutual support and respect that members, with their shared mission of kosen-rufu, need to cultivate among themselves. “Many in body but one in mind,” meanwhile, signifies individuals making the most of their unique talents and gifts while advancing in unity toward the noble goal of kosen-rufu. In sum, the Daishonin is clarifying that the heritage of the Mystic Law flowing in his own life is transmitted through the unity of “many in body but one in mind,” and subsequently comes to pulse vibrantly within the life of each individual dedicated to the great wish of kosen-rufu. …

Unity is often thought of as a mere means to achieve some objective. However, the unity Nichiren speaks of—a unity that is based on realizing happiness for all people through the correct teaching—is itself the epitome of human harmony and the true picture of kosen-rufu. (NHR-17, “Green Fields” chapter, 294–95)

Nothing Can Defeat the Power of Nam-myoho-renge-kyo

The “Citadel of the People” chapter documents Shin’ichi Yamamoto’s visit to Europe in May 1973.

During this trip, Shin’ichi was scheduled to visit France and England. While praying for the success of their mentor’s activities in Europe, members in the Netherlands chanted Nam-myoho-renge-kyo earnestly, creating a whirlpool of prayer for Shin’ichi to visit to the Netherlands, even if there were only a 1 percent chance.

Shin’ichi’s flight back to Japan was initially set for a layover in Moscow, but changed suddenly to an airport in Amsterdam. Moreover, though the layover was an hour, the plane’s departure was delayed by four hours for maintenance.

Hearing this, around a dozen members came rushing to the airport. Shin’ichi shared with them: “Nothing can defeat the power of Nam-myoho-renge-kyo. Those who chant persistently no matter what always triumph. … The Mystic Law is the source of all happiness. Please advance through life with absolute confidence in this truth” (The New Human Revolution, vol. 17, p. 270).

Nothing can defeat the power of Nam-myoho-renge-kyo—advancing with this conviction paves the way forward for kosen-rufu.