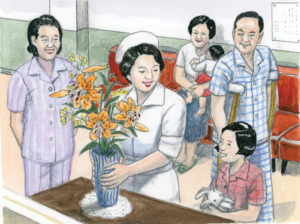 The year 1969 was a time when multitudes of people awakened to their mission to advance kosen-rufu.

One such group was established on June 6: the White Birch Group, composed of young women’s division members working as nurses. The establishment of this group took place amid a nationwide nurses’ strike to improve working conditions. Instilled with boundless courage and pride at the start of the White Birch Group, many of these young women, as the pioneers of a century of life, renewed their sense of mission and strove to exude humanism in their work as nurses.

In July, the Soka Gakkai’s Sixth All-America Convention parade was held, and members of the Fuji Fife and Drum Corps traveled from Japan to perform. Among the performers were members who overcame illness and various struggles, leaving behind victorious dramas of their youth. The chapter then details the founding of the Fife and Drum Corps in July 1956 and its history. When Shin’ichi Yamamoto learned of the great success of the event, he praised these “emissaries of peace” and joyfully remarked, “The Soka Gakkai Fife and Drum Corps is unrivaled in the world” (The New Human Revolution, vol. 14, p. 121).

On August 17, during a summer training course, the inaugural ceremony for the writers division was held. Shin’ichi offered guidance, explaining that writing “reflects one’s heart, one’s spirit, one’s state of being” (NHR-14, 149). Hoping for the emergence of countless writers who could shoulder a new cultural renaissance, he poured his life into encouraging these members. 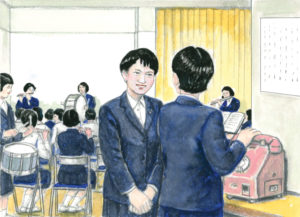 A “Youth School” for Forging Character

In time, the [Fife and Drum] corps started to function as more than a forum where young people could polish their musical talents—it became a sort of youth school where they could cultivate friendships and the spirit of teamwork, as well as forge their characters.

Shoko Odano, who would go with the corps to America and later be appointed the third Fife and Drum Corps leader, was one young woman who learned the Soka Gakkai spirit and a humanistic way of life through her involvement in the music group …

Not long after [joining the corps], she was given the responsibility of contacting several other members about rehearsal times and locations. She found that there were some people on her list who didn’t show up even though she had called them. This didn’t particularly bother her, however, because she felt that she had done her job by letting them know, and if they didn’t attend, it was their problem . . .

But when she noticed how other members handled the same responsibility, she was surprised. When someone they had contacted failed to show up for rehearsal, they were deeply concerned. They would chant about it, receive guidance from their leaders in the corps and even go to the member’s home to encourage her.

When Odano asked a fellow member why it was necessary to go to such lengths, the young woman replied: “If those members attend rehearsals and improve their skills, they’ll be able to perform with us, which will be a wonderful memory of their youth. Nothing beats the feeling of creating a beautiful and inspiring performance. I think that everyone who joins the Fife and Drum Corps has that aspiration, and I really want us to be able to achieve our goal together. That’s why I will never give up. Even though no one would say anything if I made less effort, I know I would be doing myself a disservice.”

[She] was deeply moved by the earnest efforts of her leaders who, though none were professional musicians, strove to make the Fife and Drum Corps the best in the world. Inspired by their spirit, she thought about how she, too, could contribute to achieving that dream …

Despite being somewhat unsure of her own talent, she decided to enroll in music school in order to be of greater use to the Fife and Drum Corps.

Each person has a mission. True unity is born when each person stands up and carries out his or her personal mission to the fullest. That is also the way to create a new history. (NHR-14, 134–36)

Peace is not simply the absence of war; it is a state in which people come together through mutual trust and their lives overflow with joy, energy and hope. (NHR-14, 107)

Kosen-rufu is a struggle to revitalize all spheres of life—including literature, education and government—for the sake of human happiness. (NHR-14, 151)