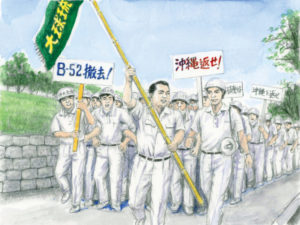 At the headquarters general meeting on May 3, 1969, Shin’ichi Yamamoto proposed the achievement of 7.5 million member-households by May 3 the following year. With preparations toward the opening of Soka University in 1971 proceeding smoothly, Shin’ichi announced three fundamental guidelines for the university, the first of which was, “Be the highest seat of learning for humanistic education” (The New Human Revolution, vol. 14, p. 5).

Shin’ichi then spoke about the mass student uprisings across Japan that had become increasingly radicalized, causing widespread confusion. Going beyond the dualistic confines of communism and capitalism, Shin’ichi suggested that the students advance along a new path rooted in humanism.

Shin’ichi was very concerned about the well-being of those involved in the student uprisings. He wrote several articles in monthly Soka Gakkai publications regarding the student movement. In one article, he pointed to a lack of love and trust for the students on part of the university faculty and administration as a fundamental reason for the conflict to have spun out of control. He also emphasized to the students that violence is never a means for true social reform.

In another article, Shin’ichi proposed adding a new branch of government to the existing three branches—the branch of education.

During a summer training session for the young men’s student division, the members participated in a protest against the new university legislation, marking the Japanese government’s plan to strip autonomy from universities. Shin’ichi also joined the protest, marching in the lead alongside the students.

On October 19, 1969, the inaugural rally of the New Student Alliance was held with 75,000 students in attendance. There, they affirmed their platform and goal, which included “the creation of a new system of learning founded on a fresh view of humanity that takes as its standard a philosophy focused on human life” (NHR-14, 58). This New Student Alliance went on to blaze a trail for the Soka Gakkai’s full-fledged movement of peace, culture and education. 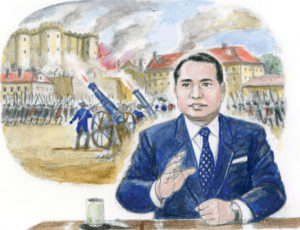 A student asked, “How can we best lead our lives as people dedicated to realizing a better society?” …

Shin’ichi responded to the member’s question …

“During the time of the Russian Revolution and the old regime in France [during the French Revolution], the structure of society was relatively simple, with a handful of rulers controlling all the wealth. But today society in general has developed to a greater extent, becoming much more pluralistic. The distribution of society’s benefits and burdens is also extremely complicated.

“A vast majority of people, while being aware of society’s contradictions and inconsistencies, enjoy a considerable degree of comfort from the established social order. A violent revolution cannot work in such an atmosphere.”

Shin’ichi looked directly at the member who had asked the question and said: “I think that the most important issue raised by the student-led All-Campus Joint Struggle Committee is how to surmount the egoism of those in power, as well as that in our own lives. In other words, they are searching for a sure way to triumph over the devilish nature inherent in power and human life.

“Only Nichiren Buddhism can defeat human egoism and its devilish nature, and create an age in which true humanity prevails. For doing so is a struggle to overcome the fundamental darkness inherent in life. Nichiren Daishonin writes, ‘The sharp sword that severs the fundamental darkness inherent in life is none other than the Lotus Sutra’ (“A Comparison of the Lotus and Other Sutras,” The Writings of Nichiren Daishonin, vol. 1, p. 1038). Indeed, the solution lies in carrying out kosen-rufu, a movement in which each individual reveals the great life state of Buddhahood through Buddhist practice and fundamentally transforms his or her life …”

Shin’ichi continued: “In short, the effort to introduce Buddhism to a single individual and thereby transform his or her life is the most gradual and certain path of nonviolent revolution. Furthermore, to live dedicated to kosen-rufu is the best way of life for a genuine reformer.

“It is also by demonstrating your abilities in society and gaining the trust of others that you can introduce Buddhism to others. We are attempting to carry out a new kind of revolution that no one has ever attempted before. And you are the ones who will actually achieve it and build a new age.” (NHR-14, 18–20)

Propagation is the lifeblood of religion. A religion that does not propagate its teachings is dead. (NHR-14, 2)