My heart is burning with a strong resolve to wage a struggle of words. Now is the time to create a brilliant path for worldwide kosen-rufu … Correctly recording the truth will serve as a clear mirror for the people of the future.

This was SGI President Ikeda’s motivation for writing The New Human Revolution, which he shared in an essay in August 2003 marking 10 years since he started working on the novel. And 15 years later, in August 2018, he completed the 30-volume series, providing us with a record of the brilliant advancement of kosen-rufu throughout the world.

President Ikeda wrote the above essay while working on the “Mighty River” chapter of volume 14, which was being published daily in the Seikyo Shimbun[1] at that time. The chapter begins with a description of the May 3, 1970, Soka Gakkai Headquarters General Meeting commemorating the 10th anniversary of Shin’ichi Yamamoto’s inauguration as third president.

That April marked 12 years since the passing of his mentor, second Soka Gakkai President Josei Toda, and at the memorial service, Shin’ichi announces that the Soka Gakkai has now expanded to embrace a membership of 7.5 million households. “The flow of kosen-rufu has at last grown from a rushing stream into a mighty river,”[2] he reports to his mentor, confident that they had reached a turning point in history, when “ripples of kosen-rufu were spreading far and wide, and a fresh movement spearheaded by people awakened to humanistic ideals was emerging.”[3]

Coinciding with this turning point was the Freedom of Speech Incident, a controversy that arose that year when the Soka Gakkai needed to defend itself against libelous accusations. A Japanese author had written a book that was highly critical of the organization, and when Soka Gakkai leaders demanded that he base his text on the truth, the author claimed that the Soka Gakkai was trying to obstruct freedom of speech and freedom of the press. Various political parties and religious organizations used this incident as a pretext to fiercely criticize and harass the Soka Gakkai.

The “Fierce Winds” chapter notes that while this incident is the first great trial Shin’ichi faced since becoming president, it only strengthens his determination to build the Soka Gakkai into an organization that will serve as a model for society. He thus transforms this stormy ordeal into a springboard for the organization’s future development.

When we muster the courage to squarely confront hardship, we can change even a headwind obstructing kosen-rufu into a tailwind aiding its progress. Indeed, the true strength of the Soka Gakkai has been its continuous advance based on the spirit to bravely stand firm against the fierce winds of adversity.

Kosen-rufu as the Journey Itself

Amid the billows of the Freedom of Speech Incident, Shin’ichi continues to take steps to solidify the development of kosen-rufu in the 21st century. One such step is the structural reform of the organization to meet the changing needs of the time. During his speech at the Soka Gakkai Headquarters General Meeting held that May, Shin’ichi transforms the members’ view of kosen-rufu—which they had understood to be a finite goal—when he declares: “Kosen-rufu is not a destination; it is the journey itself, a process of bringing Buddhism to life within society.”[4]

He calls on the participants to strive with a fresh resolve, aiming to win trust and understanding in society through their activities. To that end, he announces that the Soka Gakkai’s organizational structure will shift to a geographically-based block system, enabling members to forge closer ties with their local communities and thereby make greater contributions to society as a whole.

Regardless of where they lived, new members belonged to the same group as the person who introduced them, enabling them to carry out activities together and deepen bonds of solidarity.

Yet, to overcome the growing sense of alienation among people in modern society, Shin’ichi believes it is “vital to make the structural transition and establish a strong heart-to-heart network between Soka Gakkai members and the other people living in the same local community.”[5] The shift to the block structure was a move to establish the Soka Gakkai as an organization that was open and ready to engage with the community, and positively contribute to the future development of society.

Shin’ichi’s main concern at the start of this new phase of development is whether the members will be able to fundamentally change their way of thinking about kosen-rufu, namely, whether they can rise up with the resolve that every one of them is “shouldering the destiny of the Soka Gakkai and playing a significant role in advancing our cause.”[6] The chapter reveals that such an awareness—of sharing the same sense of responsibility as Shin’ichi—is what “determines our success or failure, our victory or defeat, in all our activities.”[7]

Sharing Our History With the Future

Another key step taken by Shin’ichi during this tumultuous period is to exert himself in fostering capable people, with a particular focus on encouraging the future division. He is convinced that if a genuine commitment to truth and justice is lost, we will be faced with a degenerate age instead of an age of the flourishing of kosen-rufu. For this reason, he gives his all to nurturing younger members to become core leaders of their generation.

At a training session for future division representatives held at the Hakone Training Center in Kanagawa Prefecture, Shin’ichi introduces the significance of this center and what role it has played in the organization’s history. Though some of the participants are elementary school students, he regards them all as “future leaders of the kosen-rufu movement”[8] and is direct and candid with them about the Soka Gakkai’s true history. He responds to all the questions they have and also discusses how to live life to the fullest. Confident that no matter how young they may be, they will listen and respond if he speaks to them in earnest, Shin’ichi strives to plant seeds in each of their hearts.

He continues to pour his life into encouraging the future division even after the training session is over. On one occasion, he expresses his profound expectations for them as follows:

Each of you is a Shin’ichi Yamamoto, each of you is a president. You are my representatives. Please become people who can say, “As long as I’m here, you have nothing to worry about.”[9]

To Shin’ichi, the triumph of his disciples is the “proof of his indisputable victory.”[10] Today, these young people are playing key roles in various fields throughout society.

I believe President Ikeda opened the way for a new era of worldwide kosen-rufu through personally nurturing the future division members into truly capable individuals. It is now up to us to carry on our mentor’s efforts to raise future leaders of kosen-rufu who will pave the way for the next 50 or even 100 years of our development.

The “Fierce Winds” chapter describes a leaders meeting held in Wakayama Prefecture in December 1969, which Shin’ichi attends in spite of running a high fever. Recently the members in Wakayama held a commemorative gathering to mark the 50th anniversary of this meeting at the very same venue, and future division members performed a song for the occasion. What’s more, as they practiced their song in the lead up to the event, family members and those in the local Soka Gakkai community made it a point to share the history of kosen-rufu in Wakayama with them, teaching them the importance of faith and the greatness of having a mentor in life.

The year 2020, the Year of Advancement and Capable People, is profoundly significant as we celebrate the 60th anniversary of President Ikeda’s inauguration as third president as well as the 90th anniversary of our founding. President Ikeda has been emphasizing that the next 10 years leading up to the Soka Gakkai’s centennial will prove to be a vital crossroads for humanity. Let us share the same spirit and commitment as our mentor as we strive to foster the future leaders of the Soka Gakkai, paving the way for kosen-rufu to endure for generations to come.

Translated from the December 25, 2019, issue of the Seikyo Shimbun, the Soka Gakkai’s daily newspaper. 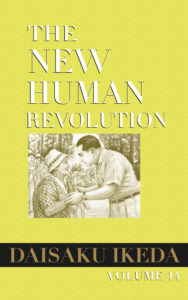 Wisdom and Courage
Amid student unrest across Japan, Shin’ichi Yamamoto makes a number of proposals regarding the future of the student movement and of education as a fourth branch of government. Student division members launch the New Student Alliance.

Mission
The young women’s division White Birch Group for nurses is established, as is a writers’ division.

Fierce Winds
In December 1969, Shin’ichi encourages members in Kansai in spite of his ill health. The Soka movement for kosen-rufu continues to expand despite the controversy whipped up by the Freedom of Speech Incident.