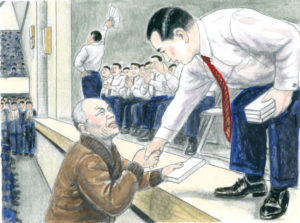 Toward the end of December 1969, Shin’ichi Yamamoto was scheduled to visit the Kansai region for a guidance tour. Prior to this trip, however, he was struck with acute bronchial pneumonia, causing him to suffer with a high fever and relentless bouts of coughing.

On December 21, despite warnings from his doctor, he traveled to Wakayama Prefecture to attend a leaders meeting. Expending every last ounce of energy, he encouraged the members and led a Soka Gakkai song with a Japanese fan in hand. His fierce life-or-death battle ignited the Wakayama members’ fighting spirit to open new paths to victory.

Around this time, the Soka Gakkai faced a barrage of criticism from those claiming that the organization attempted to obstruct the publication of books highly critical of the organization. After two Soka Gakkai leaders visited the writer of one such book, asking him to base his statements on fact and to refrain from making statements based on conjecture, others who had written books critical of the Soka Gakkai joined in the clamor.

As a result, this issue reached the Japanese Diet, and attacks on the Soka Gakkai, the Clean Government Party (Komeito) and Shin’ichi only intensified.

It was apparent that behind such attacks were the established religious and political powers, who, threatened by the rapid advancement of the Soka Gakkai and Clean Government Party, sought to suppress their efforts.

In the midst of these challenges, in January 1970, it was announced that the Soka Gakkai surpassed its goal of 7.5 million member-households more than three months ahead of schedule.

While Shin’ichi and the Soka Gakkai continued to face fierce winds of adversity head on, Shin’ichi strengthened his determination to create a model organization that would contribute to society. 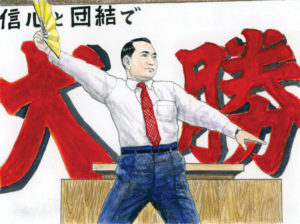 During his December 1969 tour of the Kansai region, Shin’ichi Yamamoto proceeded to Wakayama Prefecture despite his high fever. At the local leaders meeting, he devoted every ounce of strength to encouraging the members.

When he ended, the emcee announced that it was time for Soka Gakkai songs …

When the songs were finished, cries of “Sensei!” rose from throughout the gymnasium. Then one member shouted, “Please lead a song!” Shin’ichi smiled and nodded his assent. But at just that moment, he began to cough violently. He covered his mouth and coughed five, then six times, his back shuddering as he did so. He took a deep breath, but that didn’t help, and more than a dozen painful coughs racked his body. The microphone onstage picked up the sound.

After his coughing stopped, the members could hear his labored breathing, and they all gazed at him with concern. But as soon as he regained his composure, Shin’ichi stood up briskly and said: “I’m fine. All right, I’ll lead a song!”

“I’ll do anything if it will make you happy. I’m your president, after all.”

The Brass Band started to play the powerful melody …

With a Japanese fan in hand, Shin’ichi began to lead the song. His movements were dignified and graceful, as if he were soaring through the vast skies. In his heart, Shin’ichi resolutely called out to the devilish forces of the universe: “Devils of illness, come forth! No matter what happens, I will continue to fight!” …

The Wakayama members were deeply moved by Shin’ichi’s powerful leading of the song, and many had tears in their eyes. At the same time, some of the women’s division members, worried about Shin’ichi’s condition, suppressed the urge to cry out for him to stop. Everyone present engraved the scene in their hearts, vowing: “I’ll do my best, too! I will win!” They clapped with all their might and sang along at the top of their voices. (The New Human Revolution, vol. 14, pp. 187–89)

Being careless or making oversights indicates a lack of earnest commitment to standing up and taking full responsibility. If we are serious and have the strong resolve not to allow a single failure, we will naturally be meticulous. (NHR-14, 169)