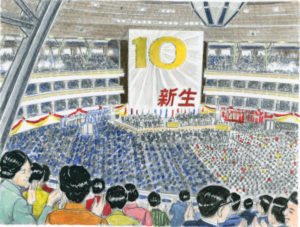 On May 3, 1970, a headquarters general meeting was held, marking Shin’ichi Yamamoto’s tenth anniversary as Soka Gakkai president. During the meeting, Shin’ichi explained that “Kosen-rufu is not a destination; it is the journey itself,” and defined it as “a great cultural movement unfolding in the realm of the Mystic Law” (The New Human Revolution, vol. 14, p. 258).

Shin’ichi also turned to the subject of the recent freedom of speech controversy, explaining that the passionate endeavors of individuals to ensure the Soka Gakkai was correctly understood had invited severe misunderstanding from the public. Taking full responsibility for the situation, Shin’ichi bowed in apology.

Then, it was announced that the Soka Gakkai would be restructured, moving to a geographically based block system, that is, a horizontal structure where new members would belong to a district in the geographic location they lived in. Until this time, it was based on a vertical framework, where new members practiced in the same district as their sponsor regardless of geographic distance.

With this general meeting, the Soka Gakkai had set forth anew into an “age of the mighty river.”

Looking toward the 21st century, Shin’ichi concentrated his efforts on raising the leaders of the next generation. In June, he held a training session with representatives of the elementary school, junior high school and high school divisions, forming the Future Group. 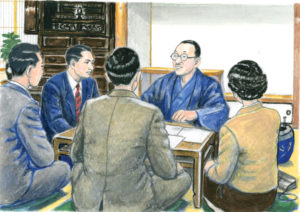 Engraving the Spirit of the Newspaper’s Founding

In September 1970, the new Seikyo Shimbun Building was completed. Shin’ichi Yamamoto toured the building and recalled the starting point of the Seikyo Shimbun.

Recalling the events surrounding the launching of the paper, Shin’ichi said to some of the newspaper’s executives accompanying him: “… We must never forget the difficulties we faced when we were producing the newspaper in that cramped room in Ichigaya.

“The better your working environment and the equipment at your disposal, the more important it is to remind yourselves of the pioneering spirit of those early years” …

The first edition was published on April 20, 1951, after Josei Toda had recovered from the collapse of his businesses and just before he became the second Soka Gakkai president.

Mr. Toda had initially mentioned the idea of publishing an organ paper in August of the previous year, when the Toko Construction Credit Union he ran was forced to suspend operations. Mr. Toda and Shin’ichi had been to a coffee shop in Toranomon, Tokyo, where they had a meeting with a journalist who had learned of the closing of the credit union. On the way back, Mr. Toda said to Shin’ichi with great seriousness: “Shin’ichi, newspapers have unimaginable power in today’s world. Publishing a newspaper means having tremendous influence. The Soka Gakkai needs its own newspaper in the nearest possible future. Please think about it, Shin’ichi.”

That evening, after speaking to Shin’ichi about his idea of starting a newspaper, Mr. Toda announced that he was stepping down as general director of the Soka Gakkai.

On a cold February evening the following year, Mr. Toda announced to Shin’ichi: “Let’s get started on the newspaper now. I’ll be the president and you’ll be the vice president. Let’s give this our all!” …

Several more planning sessions were held, and there were many ideas about what to call the paper …

The title Seikyo Shimbun (Sacred Teachings Newspaper) was finally settled on after much consideration. The name brimmed with Mr. Toda’s wish to communicate the essential law of the universe, Nichiren Buddhism, to the entire world. (NHR-14, 310–12)

The steps taken to achieve anything momentous are by no means glamorous. In fact, in most cases, they take place quietly and out of the limelight. But such accumulated efforts have the power to change the world. (NHR-14, 296)

Excerpts From Nichiren’s Writings in Volume 14