This installment, published in the December 18, 2019, issue of the Seikyo Shimbun, focuses on passages from Nichiren Daishonin’s writings that SGI President Ikeda discusses in volume 14 of The New Human Revolution.

“Although I and my disciples may encounter various difficulties, if we do not harbor doubts in our hearts, we will as a matter of course attain Buddhahood. Do not have doubts simply because heaven does not lend you protection. Do not be discouraged because you do not enjoy an easy and secure existence in this life. This is what I have taught my disciples morning and evening, and yet they begin to harbor doubts and abandon their faith. Foolish men are likely to forget the promises they have made when the crucial moment comes.” (“The Opening of the Eyes,” The Writings of Nichiren Daishonin, vol. 1, p. 283)

Obstacles Are the Tools for Polishing and Forging Your Life 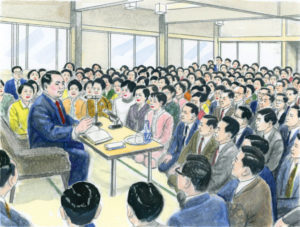 In December 1969, Shin’ichi Yamamoto departed Osaka to visit the Matsusaka Community Center in Mie Prefecture. There, he shared encouragement based on a passage from “The Opening of the Eyes.”

“What will we do at the crucial moment? That is when our daily efforts in faith become manifested …

“It’s important to carry out faith that flows like water, continuing with perseverance and quiet determination. We need to polish and fortify our lives and cultivate absolute conviction in faith. When we can do that, we will be able to rouse tremendous strength at the crucial moment.”

Seeking to arouse the determination of each person present, Shin’ichi continued: “On the individual level, ‘the crucial moment’ is a time when you or someone you love is struck by a serious illness or has some unforeseen accident, or you lose your job or your business. Such events are the manifestation of your karma from the infinite past and serve as an opportunity for you to change your destiny.

“Having your faith challenged or opposed is another example of a ‘crucial moment,’ as are times when the Soka Gakkai is persecuted or faced with some difficulties. The only way to attain happiness is to establish a diamondlike, indestructible state of life and enable it to shine. Obstacles and adversity are the best tools for polishing and forging your life.

“Times of great persecution are therefore the perfect chance for us to change our karma and transform our life condition. That’s why we need the courage to bravely confront such onslaughts. We must not be cowardly.” (The New Human Revolution, vol. 14, “Fierce Winds,” pp. 193–94)

“It is through the use of words and letters that the Buddha saves living beings.” (“Letter to Renjo,” WND-2, 6)

The Resolve for Seikyo’s Expansion 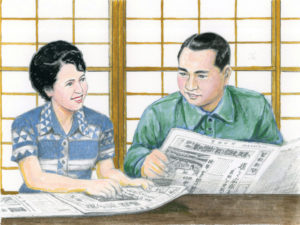 In September 1970, approaching the 20th anniversary of the founding of the Seikyo Shimbun, the Soka Gakkai’s daily newspaper, the new Seikyo Shimbun Building was completed.

In the decade since becoming president of the Soka Gakkai, Shin’ichi had not let the newspaper out of his thoughts. Savoring the smell of fresh ink as he looked through the paper’s pages each morning, he and his wife, Mineko, would pray for the safety of the Seikyo Shimbun deliverers around the country.

As he read the Seikyo Shimbun each morning, Shin’ichi Yamamoto thought of the next day’s edition, wondering what would be the front-page story, what issue the editorial would address and what kind of articles would be featured. He considered the development of the newspaper, which Josei Toda had poured his entire being into creating, as his personal mission and responsibility. As a result, he sometimes offered direct advice to the newspaper staff, and whenever the editorial department requested an article from him, he always did his best to respond, no matter how busy he was …

Nichiren Daishonin writes, “It is through the use of words and letters that the Buddha saves living beings” (WND-2, 6). Accordingly, the role of the Seikyo Shimbun in correctly conveying the principles of Buddhism is extremely important. In addition, with the abundance of information available in the modern world, it is not uncommon for people to become so inundated that they cannot actually think about and establish their own sense of values. We therefore need some sort of philosophical standard by which to judge the world around us. The mission of the Seikyo Shimbun is to serve as such a guidepost. (NHR-14, “Mighty River,” 315–17)

The Source of the Soka Gakkai’s Strength

From 1969 to 1970, the Soka Gakkai was faced with relentless criticism. The author of the Soka Gakkai’s critique decried the latter’s requests to write based on fact as suppression of his freedom of speech.

And in another book, Soka Gakkai, commentator Soichiro Tahara wrote that with this Freedom of Speech Incident, he believed, and anyone would be convinced, that the organization would suffer heavy damage and surely decline.

The extent of attack on the Soka Gakkai met Tahara’s predictions. However, the Soka Gakkai triumphed over these strong winds of adversity and began carrying out its expansion more than ever. To investigate the reason for this unexpected growth, Tahara interviewed numerous women’s division members following the Freedom of Speech Incident.

They clearly expressed, “Each and every one of us are connected to President Ikeda.” The source of the Soka Gakkai’s strength is none other than this bond of mentor and disciple.

Amid this turmoil, SGI President Ikeda continued to exert himself in fostering capable youth. He declared at a press conference: “Please wait and see how the Soka Gakkai develops in the 21st century! We’ll have a steady stream of outstanding individuals who are making great contributions to society. That will be the proof of my victory!” (January 2020 Living Buddhism, p. 63).

Now in the 21st century, the young successors President Ikeda personally trained are playing active roles as leading figures throughout the world. The social contributions of these capable people will continue from one rank to the next, becoming the vast river that will enrich the world.