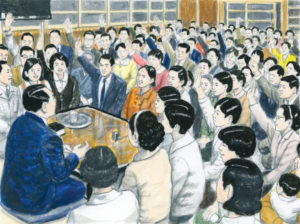 In September 1968, Shin’ichi Yamamoto flew to Asahikawa, Hokkaido, on his way to Wakkanai, one of Japan’s northernmost cities.

On the 13th, he urged the members in Asahikawa to dedicate their lives to the great vow of kosen-rufu in order to achieve eternal prosperity and happiness.

On the 14th, Shin’ichi visited Wakkanai and attended the Wakkanai Joint Chapter guidance meeting. Among the participants were a husband and wife who shouldered responsibility for kosen-rufu on Rishiri Island while challenging financial hardship. He visited the area in part to praise fellow members courageously striving for kosen-rufu.

He called on the members to make “Wakkanai the first place to realize kosen-rufu in all of Japan” (The New Human Revolution, vol. 13, pp. 130–31) as part of five guidelines that he presented to them. He urged that when the members in the northernmost area of Japan succeed in achieving great victories for kosen-rufu amid challenging circumstances, they will give hope to fellow members throughout the country.

After the meeting, he looked up at the night sky and thought, Like the Big Dipper, I would like this northern land to eternally serve as a guiding star of hope for our kosen-rufu movement (p. 138).

At the September 25 Soka Gakkai Headquarters Leaders Meeting, Shin’ichi called for the strengthening and enhancement of the district discussion meetings, the quintessence of the entire organization. He announced the formation of a “Discussion Meeting Promotion Office,” for which he would assume responsibility.

In October, Shin’ichi participated in discussion meetings in Fujinomiya in Shizuoka Prefecture as well as in Kita Ward in Tokyo. This set off a fresh wave of momentum throughout the organization, advancing the reformation of the discussion meeting, a forum for revitalizing people’s lives. 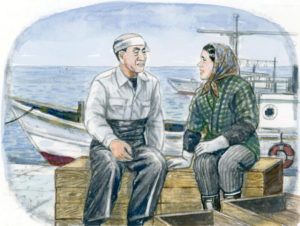 Uncrowned Heroes Working Behind the Scenes

In September, Shin’ichi Yamamoto visited Wakkanai in Hokkaido. At a guidance meeting, he met Choji and Chie Horiyama, a couple that bravely opened the path for kosen-rufu on Rishiri Island.

The Horiyamas were always there to listen to the struggles of their fellow members, offering simple, yet sincere, encouragement. Adored by everyone, they earned the nicknames “Mama” and “Papa.”

One year, the Rishiri Island fishing industry was hit hard by a low haul and the Horiyamas were barely able to eke out a living. This forced them to seek work in a coastal town on the Hokkaido mainland that was known to have bountiful waters … However, they could not stop thinking about their members.

At Esashi, the catch was plentiful, and the couple worked tirelessly. But when they sat down together at the end of the day, their conversation inevitably turned to their fellow members on Rishiri, some of whom were struggling financially or whose physical disability made it difficult for them to get to activities. None of them had been practicing for very long and they had yet to develop firm conviction in faith …

Their concern grew each day until finally they could stand it no longer.

They both agreed: “There are members back home who depend on us. So what if we have to struggle to make a living! Let’s go back to Rishiri and dedicate our lives to kosen-rufu and our fellow members there. That is our mission.” …

Working to support their fellow members and for the prosperity of Rishiri Island gave the Horiyamas tremendous fulfillment and served as a driving force in their activities. As soon as they heard that someone was in trouble, they would immediately rush to see the person, no matter how far away he or she lived. Empathizing wholeheartedly with him or her, they would offer warm encouragement. And when members overcame their hardships, the Horiyamas would celebrate their victory together with them.

The Horiyamas were ordinary people of modest means, but their determination and sense of responsibility to support and protect their fellow islanders were second to none.

Now, eleven years had passed since the Horiyamas had taken faith. Thanks to the sincere and selfless endeavors of the pioneer members, starting with Choji and Chie, a solid foundation of kosen-rufu had been built on Rishiri Island.

Shin’ichi firmly believed that ordinary Soka Gakkai members working quietly behind the scenes to spread Nichiren Daishonin’s teachings were worthy of the highest respect. And he was determined to devote his life to supporting and praising such members. Indeed, the main reason for his visit to Wakkanai was to wholeheartedly encourage the members there in person, and to show his appreciation for their tenacious efforts. (NHR-13, 127–29)

The benefit derived from contributing to kosen-rufu by offering one’s home as the center for activities is boundless and immeasurable, and it translates into great fortune that will extend from generation to generation. (NHR-13, 105)

As long as women’s happiness is sacrificed, peace for humanity can never be realized. When women shine, they shed light upon their households, their communities and their societies. This is why we need to make the 21st century a Century of Women, a time when women will take center stage. (NHR-13, 142)