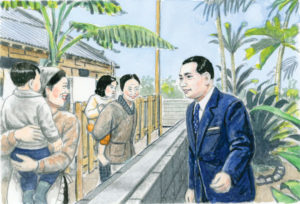 On November 13, 1968, Shin’ichi Yamamoto traveled to Amami Oshima. Since his visit five years prior, the organization there had expanded from one joint chapter to a headquarters comprising two joint chapters.

The previous year, Soka Gakkai members living in one of the island’s villages had for a time been subjected to harassment by local residents.

The suppression escalated, and members were ostracized. In some areas, village heads secretly collected members’ Gohonzon, while in other instances members were threatened with job termination or not getting hired for work. There were even demonstrations calling for the destruction of the Soka Gakkai.

Having received reports of this, Shin’ichi immediately sent top leaders to the island and also penned a postcard to the joint chapter leader in hopes of encouraging the members of Amami Oshima. He asked them to embrace others with a vast state of life while carrying out tenacious dialogue and working for the prosperity of society.

Arriving at the Amami Oshima Community Center, Shin’ichi wholeheartedly praised the earnest struggles of his precious friends. He called on the Amami organization to become an exemplary model of kosen-rufu in Japan, taking the initiative to foster ties of friendship with neighbors of the community center.

The members of Amami Oshima began to contribute to improving life on the island in accord with Shin’ichi’s encouragement, becoming forerunners of kosen-rufu by establishing magnificent castles of hope. 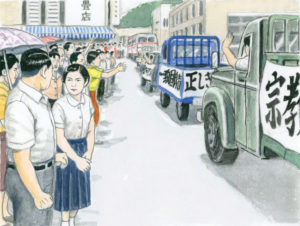 Spreading Justice and Our True Purpose

As persecution against Soka Gakkai members grew on Amami Oshima Island in Kagoshima Prefecture, a June 1967 demonstration was held, calling for the expulsion of the Soka Gakkai from the city of Naze (now Amami City).

The day before the demonstration, Amami Joint Chapter Leader Takashi Nogawa, who lived in nearby Sumiyo Village, said to his daughter, a third-year junior high school student: “Tomorrow, we’re going to Naze. There’s something I want to show you there.”

The next day, wondering what it was that he wanted her to see, Teruko accompanied her father to Naze. As they stood on one of the city’s main streets, a procession approached. From the car speakers blared such messages as “Don’t condone propagation practices that disturb the peace!”

Teruko felt afraid, but above all, she was outraged.

“Dad, what’s going on? Why is the Soka Gakkai being treated this way?”

Takashi replied: “I want you to etch this scene into your mind. We Soka Gakkai members have been striving earnestly for the happiness of the people living on this island. Our cause is just.

“But it’s precisely for this reason that we’re being harassed and attacked in this way. Just because something is correct doesn’t mean people will recognize that and praise it. On the contrary, such things are often met with great opposition.

“Teruko, I hope you will never forget the indignation you feel now, and that you’ll continue to talk to people about the Soka Gakkai’s real purpose. One day, you and your generation are going to transform this island into a paradise of happiness. You will make it an ideal place where Nichiren Daishonin’s teaching flourishes. That’s the mission of the children who grow up in the Soka Gakkai.”

A loud voice rang out from one of the cars in the procession: “Out with religions that disrupt the peace of the village!”

Teruko Nogawa bit down on her lip and glared at the car. Her father, Takashi, patted her on the shoulder and tried to console her, saying: “In due time, they’ll come to feel ashamed of their actions today. It’s up to us to make sure that happens. That’s why it’s important that you, as a child of the Soka Gakkai, prove the greatness of this organization, and turn everyone into an enthusiastic ally and supporter. All right? … ”

They would remember the distressing images of that day with anger for years to come. (The New Human Revolution, vol. 13, pp. 226–27)

The fact that our members work together amicably is proof that they are achieving their human revolution and transforming their lives on a fundamental level. (NHR-13, 249)