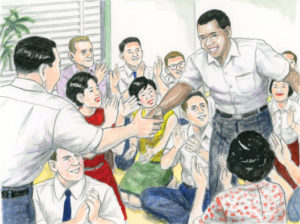 In 1969, Shin’ichi Yamamoto’s poem “Song of Construction” was published in the New Year’s issue of the Seikyo Shimbun, the Soka Gakkai’s daily newspaper. He felt that now was the time for all members to stand up with courage and energy, and establish a lasting foundation for kosen-rufu.

On February 15, Shin’ichi attended a gongyo meeting at the newly remodeled Soka Gakkai Okinawa Headquarters building. He called to the members, stating, “Constructing a land of happiness and prosperity fundamentally begins with each resident transforming his or her own karma, and subsequently the karma of the land as a whole” (The New Human Revolution, vol. 13, p. 278).

At around this time, because of the many U.S. bases on Okinawa, an increasing number of Americans had been joining the Soka Gakkai.

Mercy District, which was composed of U.S. military personnel and their dependents, produced many capable people for global kosen-rufu who returned to the United States mainland to actively work as leaders in their respective areas. During this visit, Shin’ichi poured his entire energy into encouraging these individuals, as well as local Okinawan members, like a women’s division member who lost two children in a tragic accident.

Also, a boat that his party had boarded in Onnason had a faulty rudder, forcing it to be redirected to Nago where Shin’ichi had a dramatic meeting with members who happened to be waiting for him there. He also embraced and encouraged the members from Kunigami who hastened to the Okinawa Headquarters, driving long hours in their cars.

Shin’ichi’s stay in Okinawa had been a mere four days and three nights. During that limited time, however, he had given the members there tremendous courage, fanning the flames of their indomitable fighting spirit to make Okinawa a land of genuine happiness. 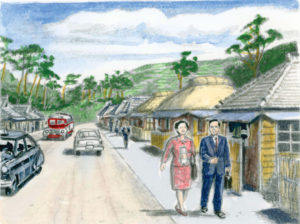 In February 1969, Shin’ichi Yamamoto went on a guidance trip to Okinawa where he met Nago Chapter Women’s Leader Fujiko Kishiyama. Together with her husband, Kotoku, Fujiko overcame an onslaught of arduous trials.

With strong conviction in the power of the Gohonzon, the couple went out each day to tell others about Buddhism. But neither their relatives nor neighbors would listen to them. Often they were openly mocked. Nevertheless, they remained resolute, with Fujiko proudly declaring: “We lost our eldest son to sickness, and our two daughters died when our house burned down. I’m sure we’ve caused a lot of trouble to the community.

“But we have not been beaten … Even with faith, life is full of difficulties. And there is the possibility that you will be faced with indescribable suffering. But faith is the power that enables you to go on living in spite of those struggles. We know we will attain happiness. You just watch us and see.”

Fujiko thought: Life may be a series of sufferings, but sufferings don’t equal unhappiness. Buddhism expounds that sufferings are enlightenment. I’m sure that my children died in order to teach me that. In fact, they were born in this world to give me the mission of proving that with my life. She vowed to her late children: “I will demonstrate through my life just how wonderful faith is. I won’t be defeated no matter what happens. Your deaths will not be in vain.”

Together, the Kishiyamas continued to work hard, never retreating a single step. Eventually, what began as a district in Nago grew into a joint chapter. Feeling bad that they had caused a fire that brought worry and unease to their neighbors, they also strove to contribute to their community and society. In later years, Kotoku would become president of a local association for elderly residents and Fujiko would become president of a city women’s group as well as a local welfare commissioner and a member of a council on child welfare. Over time, both of them won the trust and admiration of their neighbors. (NHR-13, 333–36)

A capable person must be strong. You may have a pure and beautiful heart, but if you are weak you cannot work for peace or the happiness of others. Therefore, I hope you will find something that you really excel at. It doesn’t matter what it is, but the point is that you pursue it with your whole being. (NHR-13, 318)

Excerpts From Nichiren’s Writings in Volume 13