This installment, published in the November 20, 2019, issue of the Seikyo Shimbun, focuses on passages from Nichiren Daishonin’s writings that SGI President Ikeda discusses in volume 13 of The New Human Revolution.

“Though you remain in Sado, your heart has come to this province.” (“The Drum at the Gate of Thunder,” The Writings of Nichiren Daishonin, vol. 1, p. 949) 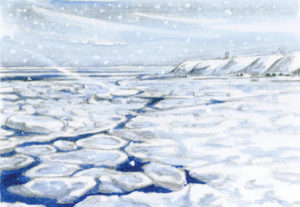 In September 1968, Shin’ichi Yamamoto traveled to Wakkanai, Hokkaido, the northernmost area of Japan, to encourage the members there.

Due to Wakkanai’s location in the northernmost reaches of Japan, they were rarely able to receive guidance from senior leaders, and many of them carried out their activities with a sense of loneliness and isolation.

In fact, Shin’ichi’s aim that day was to dispel the clouds from the members’ hearts.

Referring to the passage, “Though you remain in Sado, your heart has come to this province” (WND-1, 949), Shin’ichi declared: “Sea and mountains separated Sado Island from Mount Minobu, but the lay nun Sennichi’s strong seeking spirit meant that she was always connected to Nichiren Daishonin. Geographic distance has nothing to do with spiritual distance. The hearts of those who struggle courageously with the determination to lead people to happiness and to realize kosen-rufu in the place where they are, no matter how remote it may be, are one with Nichiren Daishonin’s heart. This is the spirit of the Soka Gakkai; it is the practice of faith that is in rhythm with the Soka Gakkai Headquarters. Conversely, if those who live close to or even work for the Headquarters lose their fighting spirit and cease to take action, then it is actually they whose spirits are far removed from Nichiren’s and the kosen-rufu movement.

“Like you, I am earnestly dedicated to working for kosen-rufu. In that way, I have a solid bond with all of you, the members of Wakkanai, who have a burning passion to actualize our noble goal.” (The New Human Revolution, vol. 13, pp. 132–33)

“I pray that before anything else I can guide and lead the ruler and those others who persecuted me.” (“On the Buddha’s Prophecy,” WND-1, 402)

Use Devilish Functions as the Springboard for Our Human Revolution 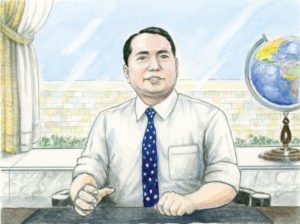 Talking to Soka Gakkai leaders heading for Amami Oshima, where Soka Gakkai members were being persecuted for their faith, Shin’ichi addressed the true nature of “devils.”

“Just as people can play the part of devilish functions, they can also act as protective forces who come to our aid. Whether a certain person or incident serves as an obstacle to our happiness or a springboard for our human revolution depends entirely on our inner resolve.

“There are people who rejoice and deepen their faith when great difficulties arise, seeing them as proof of the veracity of Nichiren’s words. On the other hand, there are also those who receive benefits from their practice and establish a comfortable life, only to then slacken in their faith.

“Since President Toda’s time, there have also been individuals who, resenting the strict yet compassionate guidance of their mentor, eventually turned their backs on the organization. Ultimately, our environment is nothing more than a medium for devilish functions, for in actuality these functions reside in our own heart.”

Shin’ichi then said contemplatively, gazing into the distance: “The fundamental solution to this issue lies in the transformation of the members’ state of life. Nichiren Daishonin writes: ‘I pray that before anything else I can guide and lead the ruler and those others who persecuted me’ (WND-1, 402).

“It all depends on whether they can draw forth the same kind of life condition as Nichiren Daishonin, who was determined first to save the authority figures responsible for the persecutions against him.”

“I would like the Amami members to stand up with this same spirit, showing warm understanding toward their fellow islanders and praying for their happiness as they advance together with them in friendship.

“From now on, their struggle is to win people’s trust. Sincere dialogue is the key. It’s also important for each member to tenaciously strive to contribute to society.” (NHR-13, 221–23)

The Five Stages of a Movement

In volume 13 of The New Human Revolution’s “Shining Citadel” chapter, SGI President Ikeda writes about the five stages that every successful movement undergoes, which were put forth by Mahatma Gandhi, the leader of the Indian independence movement: indifference, ridicule, abuse, repression and respect.

In addition, Gandhi asserted that sincerity is the key to transforming repression into respect.

In the same chapter, President Ikeda describes the persecution Soka Gakkai members in Amami Oshima endured in 1967, sparked by the advances being made by the Clean Government Party (Komeito). Initiated by the influential people in the village, not only were Soka Gakkai members socially ostracized, they were also subject to an anti-Soka Gakkai movement aimed at thwarting all their propagation efforts.

The cause of this oppression, President Ikeda says, was “misunderstandings stemming from ignorance about the Soka Gakkai.” He conveyed a message to the Amami members, saying: “To harbor animosity toward others goes against the true spirit of a Buddhist practitioner. It is important to get along well with everyone” (NHR-13, 219).

When visiting Amami in November 1968, he urged the members to become a model of kosen-rufu in Japan.

With Shin’ichi Yamamoto’s encouragement in their hearts, the Amami members persevered in carrying out sincere dialogues about Buddhism, doing their utmost to contribute to their local area.

Today, the members have widely expanded the circle of trust in their community. They even attained the astounding result of having each household in their village subscribe to the Seikyo Shimbun.

No matter what kind of oppression arises, when we continue making sincere efforts for kosen-rufu, the path to victory will open without fail. The victorious record of the Amami members will always shine brilliantly in the annals of kosen-rufu.

Young Phoenixes, Soar Into the Future