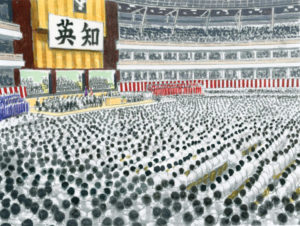 In 1968, great efforts were being made to develop the student division, including forming university groups on campuses nationwide. During this time, Shin’ichi Yamamoto proposed the normalization of Japan-China relations at the September 8 Student Division General Meeting.

At the time, the People’s Republic of China (PRC), with a population of more than 700 million, remained excluded from the United Nations and isolated from the international community. Japan, together with the United States, had adopted an adversarial stance against China, which also experienced a deterioration in relations with the Soviet Union.

Shin’ichi proposed the normalization of Japan-China relations based on the ideal of world citizen-ship and a wish for peace in Asia and the world.

Longtime Japanese politician Kenzo Matsumura and other pioneers of friendly bilateral ties expressed their agreement and support of the proposal, while news of it was immediately relayed to China. Meanwhile, phone calls and letters containing threats came in to the Soka Gakkai Headquarters, and Shin’ichi was assailed with fierce criticism.

In 1970, when Mr. Matsumura traveled to China, he met Premier Zhou Enlai, who expressed his wholehearted wish to welcome Shin’ichi to China.

However, as the restoration of diplomatic relations between the two nations was a political matter, Shin’ichi entrusted the political party he founded, the Clean Government Party (Komeito), to mediate with the Chinese government. In September 1972, a ceremony took place to mark the signing of the China-Japan Joint Communiqué, normalizing relations between the two nations.

In 1974, Shin’ichi made his first visit to China. On his second visit, he met Premier Zhou, resolving “to devote [his] life to building an indestructible golden bridge of friendship between Japan and China” (The New Human Revolution, vol. 13, p. 87). 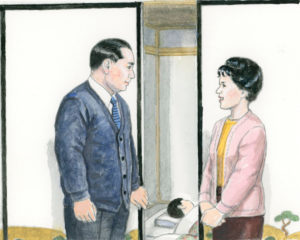 My Great Comrade in Arms

On September 8, 1968, Shin’ichi Yamamoto presented “A Proposal for Normalization of Relations Between Japan and China” at a student division general meeting held at the Nihon University Auditorium. Reported in domestic and international media outlets, the proposal was criticized by some at the forefront of Japan-Chinese relations.

The reactions to [Shin’ichi’s] proposal were not all positive. As he had anticipated, he was also assailed with fierce criticism and abuse. Threatening phone calls and letters arrived at the Soka Gakkai Headquarters, and some groups even sent out sound trucks to drive around and shrilly denounce his proposal over their loudspeakers.

Shin’ichi had made his proposal for the normalization of relations between Japan and China based on his faith as a Buddhist who wished for peace in Asia. He was determined to change public opinion and give fresh momentum to the realization of closer ties, even at the risk of his life, and was thus fully prepared for every sort of insult, criticism and persecution. He wasn’t in the least bit afraid.

He was, however, worried about his wife, Mineko, and their children. The situation was such that it was not impossible that they could be targeted as well. While he was prepared to face any consequence that might come as a result of his actions, he did not wish to expose his wife and children to danger, and he prayed wholeheartedly for their safety.

When he returned home each night and saw that they were safe and sound, he breathed a sigh of relief. One day, sensing her husband’s concern, Mineko said to him with a smile: “We’re fine. You did the right thing in making your proposal, so please don’t worry. I’ve explained everything to the children. We will be very careful. Something may happen anyway, but I’m prepared.” She spoke with calm composure, strength resonating in her words.

Shin’ichi was happy to hear this from his wife, and he felt a surge of courage. Mineko’s conviction was the best encouragement anyone could have offered him. The phrase comrade in arms came to his mind. Smiling back at his wife, he said: “Thank you, my great comrade in arms!” (NHR-13, 61–64)

True diplomatic relations begin with connections between human beings, with human exchange. The key, therefore, is to create bonds of trust and friendship that bring people together. After all, it is people who move a nation. (NHR-13, 52)