On December 5, 1974, third Soka Gakkai President Daisaku Ikeda met with Chinese Premier Zhou Enlai during his second visit to China. This year marks the 45th anniversary of that meeting [2019].

The “Golden Bridge” chapter of volume 13 of The New Human Revolution describes the historical context in which Shin’ichi Yamamoto announces his proposal for the normalization of diplomatic relations between Japan and China at the 11th Soka Gakkai Student Division General Meeting on September 8, 1968. Forging friendly ties between the two countries was also a means of fulfilling the vow of his mentor, second Soka Gakkai President Josei Toda, who had “exceptionally strong and profound”[1] feelings toward Asia, and toward China in particular. President Toda once composed the following poem expressing that determination:

To the people of Asia
who pray for a glimpse of the moon
through the parting clouds,
let us send them, instead,
the light of the sun.[2]

Prior to announcing his proposal, Shin’ichi meets with various individuals in Japanese society who have devoted their lives to improving Japan-China relations. One such person is the business leader Tatsunosuke Takasaki.

Shin’ichi and Takasaki meet in September 1963. After sharing his observations of the situation in China, Takasaki asks him to serve as a force for friendship between the two countries, to which Shin’ichi, determined to build a golden bridge of enduring bilateral ties, responds: “Certainly! Please rest assured. I will see this through!”[3]

As the Japanese government at the time had adopted an antagonistic position toward China, Shin’ichi knew full well that his call for Japan-China friendship would be harshly criticized. Nevertheless, holding strong to his mentor’s wishes and the desires of all those who had worked for this cause, he decides to speak out.

Inspired by Shin’ichi’s proposal, the Japanese Diet member [and a proponent of restoring bilateral ties] Kenzo Matsumura tells him: “I feel as if I have gained a million allies … I would very much like to introduce you to Chinese Premier Zhou Enlai.”[4]

In these ways, Takasaki and Matsumura, who are both more than 40 years older than Shin’ichi, entrust him with the future of Japan-China relations.

This chapter also describes how Shin’ichi recognizes that “the momentous work of building a golden bridge of enduring friendship between Japan and China could not be accomplished in a single generation.”[5] That is why he specifically chooses to announce his proposal at the student division general meeting. He is firmly convinced that from among their ranks would appear youth who would dedicate their lives to actualizing his vision.

To date, President Ikeda has visited China a total of 10 times and continues to widely promote exchanges among youth, as well as exchanges at the cultural and educational levels. The unshakable golden bridge of peace and friendship between the two countries today is a testament to such efforts.

Starting in March 2020, the Min-On Concert Association will host a tour of the Shanghai Dance Theatre, who will be performing “Crested Ibises” in 30 cities across Japan. And in the fall, the Tokyo Fuji Art Museum will launch a new exhibition introducing art from the ancient Silk Road trade route.

It is now up to the youth and future division members of the Soka Gakkai to live up to their great mission and responsibility to eternalize this golden bridge that President Ikeda has worked to build between Japan and China.

The “Land of Happiness” chapter details Shin’ichi Yamamoto’s visit to Okinawa in February 1969. Issues such as the reversion of Okinawa from the U.S. to Japan continued to plague the islands at the time.

Ultimately, whether a place achieves peace and prosperity relies solely on the determination of the people who live there … The key to building a land of happiness lies entirely in the development of human beings.[6]

It is with this spirit that Shin’ichi travels to Okinawa, firmly resolved “to plant the roots of strong and unshakable faith deep in the heart of each member.”[7]

During his visit, the members hold an art festival, at which a cast of more than 100 perform a 90-minute historical play called The Young Sho Hashi, narrating the story of the great 15th-century military leader who unified the Ryukyu Islands (Okinawa) and expanded Shuri Castle. Having felt a strong connection between the tumultuous period in which Sho Hashi lived and the suffering they experienced during and after World War II, the Okinawa members selected the story of his life to express their determination to build a peaceful and prosperous land.

Shuri Castle burned down during the horrendous Battle of Okinawa in World War II. Reconstruction work began in 1989, and the main hall and some other buildings were restored in 1992.

The “Land of Happiness” chapter was published in daily installments in the Seikyo Shimbun, the Soka Gakkai’s daily newspaper, from October 2002, and I imagine that while writing it, President Ikeda was vividly recalling his visit to the castle during a guidance trip to Okinawa in February 1994.

Shuri Castle is not only a relic of Okinawan history and culture but also stands as a symbol of peace in Okinawa. Recently, the castle’s main hall and other buildings were devastated in a fire. How painful this must be for the people there! I sincerely pray that Shuri Castle regains its majesty and is restored once more.

The “Guiding Star” chapter highlights the important tradition of the discussion meeting within our movement: “Ever since [founding Soka Gakkai President Tsunesaburo] Makiguchi’s time, the heart of the Soka Gakkai could be found in that forum.”[8]

This chapter describes how Shin’ichi Yamamoto takes the initiative to revolutionize the culture of discussion meetings. When asked what the secret is to holding a fruitful discussion meeting, he declares that its purpose is to serve as a forum for Buddhist dialogue and propagation, as well as a forum to impart members with courage and confidence through heartfelt guidance in faith. He further stresses that the success of a discussion meeting depends wholly upon the determination and capacity of the leaders in charge.

1. That those who bring guests be treated with the highest respect and be encouraged wholeheartedly;
2. That everyone understands that the success of a discussion meeting depends not merely on what happens during the actual event but on advance preparations, including making sure as many people as possible attend;
3. That leaders in charge of a discussion meeting pray sincerely to the Gohonzon for its success and attend the meeting filled with unwavering resolve and confidence;
4. That leaders act with common sense and social awareness; and
5. That sincere gratitude be shown to members who make their homes available for meetings.[9]

In recent years, the Seikyo Shimbun has published features about the different ways in which discussion meetings are held in the various SGI organizations around the world. Zadankai, the Japanese word for discussion meeting, is also becoming a familiar term among our global membership. Shin’ichi asserts:

The Soka Gakkai does not exist in some faraway place. It is precisely within district discussion meetings that the reality of the Soka Gakkai is found.[10]

While striving to improve the quality of our local discussion meetings, let us continue to advance with pride as members of a Soka Gakkai that is making dynamic strides as a world religion.

Translated from the November 27, 2019, issue of the Seikyo Shimbun, the Soka Gakkai’s daily newspaper. 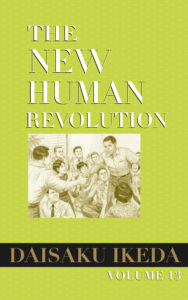 Golden Bridge
On September 8, 1968, Shin’ichi Yamamoto calls for the normalization of diplomatic relations between Japan and China at the 11th Student Division General Meeting.

Guiding Star
In September 1968, Shin’ichi flies to Asahikawa in Hokkaido and then on to Wakkanai, one of Japan’s northernmost cities.

Land of Happiness
In 1969, Shin’ichi composes a new year poem titled “Song of Construction” dedicated to all his fellow members. On February 15, he flies to Okinawa.