On Aug. 2, two NASA astronauts returned safely to Earth, landing by parachute in the Gulf of Mexico near Pensacola, Florida.

The two-month mission, manned by Robert L. Behnken and Douglas G. Hurley, was conducted by SpaceX, the first private company to send astronauts into space (NASA retired its space shuttle program in 2011).

Adding to SpaceX’s list of firsts, the mission was the first to land in the gulf as well as the first water landing by NASA astronauts since 1975. According to a NASA administrator, this could mark the start of more people traveling to space for corporate research and space tourism. Perhaps a new era of space travel was foreshadowed by mission control’s humorous greeting upon the astronauts’ return: “Thank you for flying SpaceX.” 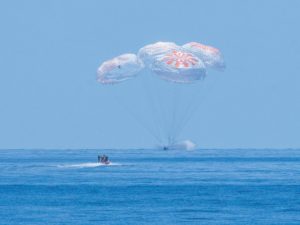 Re-imagining the Future of America