This guidance from Ikeda Sensei originally appeared in the Feb. 1, 2019, issue of the Mirai [Future] Journal, the Soka Gakkai’s monthly newspaper for the junior high and high school divisions.

As he sat at his desk studying, the young Mr. Toda enjoyed gazing out of his window at the ocean from time to time. An ambition to one day accomplish something great for society burned in his heart.

He grew up to become an expert mathematician and respected educator, as well as a successful entrepreneur who ran several businesses.

It was from him that I learned what it means to lead a truly humanistic life. Mr. Toda often told us that nothing is more powerful than sincerity. He also said, “There is no greater treasure for youth than being trusted by others.”

You, our future division members, who have appeared around a century after Mr. Toda, are Bodhisattvas of the Earth with the wondrous mission of leading our movement for worldwide kosen-rufu for the next 100 years. To you, I wish to impart the power of sincerity.

Nanjo Tokimitsu lost his father when he was a boy. He was still in his teens when he became the head of his family and assumed responsibility for managing the family’s landholdings in Ueno Village (part of present-day Fujinomiya City, Shizuoka Prefecture), where he was born and raised.

In a letter titled “The Four Virtues and the Four Debts of Gratitude,” Nichiren Daishonin offers the 17-year-old[1] Tokimitsu detailed instructions on how one should behave as a human being.

With high expectations for his young disciple’s growth and development, Nichiren presents him with guidelines in life based on the perspectives of the four debts of gratitude[2] in Buddhism and other teachings. The letter contains the following passage, which we have already studied together in this series:

Being filial toward one’s father and mother means that … one … is always mindful of providing a parent with all manner of good things, and if this happens to be impossible, in the course of a day one at least smiles twice or thrice in their direction. (The Writings of Nichiren Daishonin, vol. 2, p. 636)

In addition to having gratitude to one’s parents, the Daishonin talks about the importance of showing courtesy and appreciation to others:

Treating one’s friends with courtesy means that, although one may encounter them ten or twenty times in the course of a single day, one greets them courteously as though they had traveled a thousand or two thousand miles to see one, never showing them indifference. (WND-2, 636)

Here, we can see that he is urging the young Tokimitsu to be sincere in his interaction with. Friendship is up to you, not the other person. Just be yourself and treat others with sincerity and respect at each moment.

In the same letter, Nichiren writes, “Though one’s trustworthiness may at first go unnoticed, in time it will be openly rewarded” (WND-2, 636). Even if your efforts are not appreciated at first, if you continue being sincere, good people will naturally gather around you, and you will be able to win people’s trust in the end.

Treating all people with sincere respect is one of the key qualities of sages and worthies, says the Daishonin (see WND-2, 636).

People who take action to build friendships with others as fellow human beings are true global citizens. The mentors and disciples of Soka have forged ties of friendship with people around the world in this spirit of sincerity, as taught in Nichiren Buddhism. 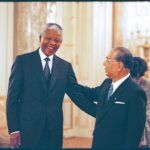 Former South African President Nelson Mandela (1918–2013) was a dear friend of mine, whom I deeply admired.

In the past, a system of racial segregation known as apartheid existed in South Africa, in which people were discriminated against based on the color of their skin. Nonwhite citizens were oppressed and marginalized, forced to live in designated areas. They were restricted from using the same public transportation as white people. Limited access to schools and hospitals also perpetuated a cycle of poverty and illness.

Under such circumstances, a young man stood up to build a “rainbow nation,” where all people, regardless of color, could live together in equality. That young man was Nelson Mandela.

Arrested because of his opposition to the government, he was imprisoned for more than 27 years—some 10,000 days. But even under the harsh conditions of his incarceration, he created a “Mandela University” of sorts, where his fellow prisoners could teach one another their skills and knowledge.

Mr. Mandela’s sincere behavior even transformed his prison wardens into allies. Furthermore, his sincerity remained unchanged after his release and subsequent election as president of South Africa.

Mr. Mandela was released from prison on Feb. 11, 1990, a date that coincides with Mr. Toda’s birthday. When he visited Japan in October that year, he made time to meet with me at the Seikyo Shimbun Building (in Shinanomachi, Tokyo). That day, some 500 Soka Gakkai youth division members joined me in welcoming him.

During our meeting, I made a five-point proposal for promoting human rights awareness through educational and cultural exchange, which included accepting students from South Africa to study at Soka University in Japan. I promised to put those plans into action and was able to realize them over the ensuing years.

Like Melos, the main character of the story Run, Melos! (by Japanese author Osamu Dazai)—who is mentioned in the future division song “Torchbearers of Justice”—keeping one’s promise is the key to building solid ties of friendship and trust. I hope you will all be people who can keep the promises you have made to your friends and to yourselves.

At an event commemorating the first democratic election in South Africa, in which voting was open to all citizens, President Mandela declared: “A bright future beckons. The onus is on us, through hard work, honesty and integrity, to reach for the stars.”[3]

Today, our fellow members in South Africa are sincerely expanding the movement for kosen- rufu and making positive contributions in society for the sake of a brighter future.

You all have a promising future ahead of you, too. Please advance confidently along the path of hard work and effort, the path of honesty and sincerity, toward that bright tomorrow.

No matter how bitter the cold now, spring is approaching day by day.

Let’s advance along the path of hope toward a flowering springtime, with “Nothing is more powerful than sincerity” as our motto!

Stand Tall with the Majestic Dignity of Mount Fuji!

Toward a Century of Health: The Wisdom for Leading a Long Life of Good Fortune and Benefit Part 4