In the following excerpts taken from The Wisdom for Creating Happiness and Peace, part 3, Ikeda Sensei describes encountering his mentor, Josei Toda, for the first time on Aug. 14, 1947. 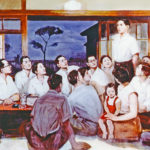 A small group of people were making their way quickly through the darkening streets to a certain house in Kojiya, in the Kamata area of Tokyo’s Ota Ward, to attend a discussion meeting.

That was Aug. 14, 1947, the fateful day that changed the course of my life forever. It was the day I gave my promise and pledge to Josei Toda to join the Soka Gakkai, which I did on Aug. 24, 10 days later.

I was 19 when I attended that discussion meeting. Mr. Toda, my mentor, awaited me like a kindly father. Our encounter was a solemn, timeless moment in the eternal flow of past, present and future. On that day, I vowed to become President Toda’s disciple and dedicate my life to kosen-rufu.

The discussion meeting on that hot and humid summer night exactly two years after the end of World War II was a vibrant drama of ordinary people finding fresh hope. Outside, the unlit streets were pitch dark, and many parts of Kamata were still dotted with ghastly burned-out tracts from the wartime bombings. The sufferings of ordinary, good-hearted citizens, many of whom had experienced the cruel loss of loved ones, were deep and persistent.

Young as I was, I asked myself rigorously day after day who was responsible for all this pain. I was in my teens and suffering from tuberculosis, which produced a fever that left me weak and aching every evening. …

It was my first time to hear Mr. Toda speak. He was giving a lecture on the treatise “On Establishing the Correct Teaching for the Peace of the Land.” In that work, Nichiren Daishonin sets forth his great philosophy for building a peaceful society.

Mr. Toda poured all of his passion and resolve into awakening the world to the dangers it faced. It was a lion’s roar proclaiming the essence of Nichiren Buddhism. His lecture did not present an antiquated, lifeless Buddhism. It revealed a noble way to a brilliant future, a great path brimming with tremendous conviction and dynamism.

After the lecture, an informal discussion ensued. Chewing on mints, Mr. Toda conversed openly and naturally. There was no trace of the condescending, puffed-up arrogance so common among religious and political figures wrapped up in formalities. Though it was our first meeting, I felt free to ask whatever questions I had in my young heart.

“What is the correct way to live?”

My voice may have conveyed an unusual intensity.

I was 13 years old when the war broke out and 17 when it ended. The most impressionable period of my life was spent under the dark and heavy clouds of war. In addition, I suffered with tuberculosis. The shadow of death seemed to follow me everywhere—war threatening from without and tuberculosis from within. Then, with Japan’s defeat, all the beliefs about the nation and life I had held until then were completely shattered.

What was the true way to live? To what should I dedicate my life? These were the questions always on my mind.

Mr. Toda replied with conviction and clarity. He didn’t engage in intellectual game playing or deception that papered over the thrust of my concern. …

That Mr. Toda had been persecuted by the Japanese militarist authorities and spent two years in prison for his beliefs was pivotal in my decision to embrace him as my mentor. I wanted to become the kind of person who, if another war broke out, had the courage to resist, even if it meant going to jail. I wanted to live my life as a person of courage who would not bow to any kind of oppression by the authorities. That was why I was seeking a practical philosophy that would help me do that. …

In a lecture at Columbia University’s Teachers College (in June 1996), I expressed the deep gratitude I owe to Mr. Toda, declaring: “Ninety-eight percent of what I am today I learned from him.” The relationship of mentor and disciple is one unique to human beings. By following the path of mentor and disciple, we can develop and improve ourselves. It holds the key to realizing our fullest human potential. (The Wisdom for Creating Happiness and Peace, part 3, pp. 225–28)

“To Make All Persons Equal” Is the Hallmark of Buddhism