The assembly on Holy Eagle Peak which continues in solemn state … has not yet disbanded. (The Record of the Orally Transmitted Teachings, p. 135)

Creating dramatic change calls for sustained effort and conviction. Our daily Buddhist practice of chanting Nam-myoho-renge-kyo and engaging in SGI activities enables us to refresh and forge our determination to keep going.

What Is the Assembly on Eagle Peak?

The “assembly on Holy Eagle Peak” is the gathering of countless Buddhas and bodhisattvas who travel from throughout the universe to hear Shakyamuni Buddha preach. Grandly depicted in the Lotus Sutra, it is the setting in which Shakyamuni expounds the sutra’s core principles.

In the assembly, a massive “treasure tower” emerges from beneath the earth, and the entire assembly is suspended in mid-air. In response to Shakyamuni’s question of who will spread this teaching after he passes, innumerable bodhisattvas, known as the Bodhisattvas of the Earth, emerge in dramatic fashion when the ground splits open. They vow to spread the hope-filled teaching of the Lotus Sutra in the chaotic time after his passing.

This assembly on Eagle Peak and the fantastic events surrounding it are not to be taken as actual historical events. Rather, they express Shakyamuni’s enlightenment, the state of Buddhahood always present in all people and accessible to those who strive in their Buddhist practice.

How Did Nichiren Interpret This?

Eagle Peak is a real place, a craggy mountain in Eastern India. It is said to have been the location of the Buddhas’ many sermons. In addition to being the site of the assembly in the Lotus Sutra, it represents the real world filled with the sufferings of birth, aging, sickness and death. Nichiren saw in this the principle that Buddhism exists only amid the realities of daily life and that it has the power to transform suffering into a source for absolute happiness.

To enable all people to awaken to their unlimited potential, he established the practice of chanting Nam-myoho-renge-kyo and inscribed the Gohonzon. Following the passage we are studying, Nichiren says: “ ‘Holy Peak’ refers to the Gohonzon. It also refers to the place where Nichiren and his followers, who chant Nam-myoho-renge-kyo, dwell” (OTT, 135).

What Does This Mean for Us Today?

Each morning and evening when we chant and do gongyo, we are in a sense joining “the assembly on Holy Eagle Peak” and reenacting the grand ceremony of the Lotus Sutra in our own lives. Chanting enables us to face our daily challenges with renewed wisdom and vitality and transform all our struggles into the fuel for growth and happiness.

Our consistent daily practice is reflected in this phrase, “The assembly on Holy Eagle Peak which continues in solemn state … has not yet disbanded” (OTT, 135). Ikeda Sensei says:

Wherever people chant Nam-myoho-renge-kyo and practice the Mystic Law in accord with Nichiren’s example, the assembly on Eagle Peak solemnly appears and never fades—in other words, they can bring forth the world of Buddhahood freely at any time. (Dec. 29, 2006, World Tribune, p. 2)

The SGI and the Assembly on Eagle Peak

The Soka Gakkai is a gathering of Bodhisattvas of the Earth striving to spread Buddhism in accord with the vow they made on Eagle Peak. Thus, the SGI itself can also be said to represent “the assembly on Holy Eagle Peak which continues in solemn state and has not yet disbanded” (OTT, 135).

These words perfectly describe this gathering of the Soka family, bound by their shared commitment “for the fulfillment of the great vow for kosen-rufu through the compassionate propagation of the great Law.”1 What a magnificent and infinitely creative assembly it is! (Sept. 18, World Tribune, p. 2)

No matter the challenges we face, our Buddhist practice and the SGI community equip us with the tools to confront and overcome them, and establish within us a “Holy Eagle Peak” that can never be destroyed. 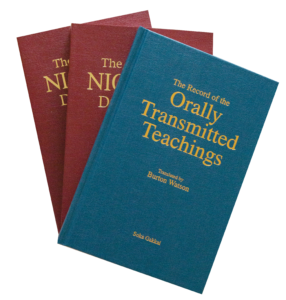 Nichiren Daishonin’s writings can be found online at nichirenlibrary.org and for purchase at bookstore.sgi-usa.org. The Record of the Orally Transmitted Teachings contains his commentary on the Lotus Sutra.

Makiguchi: A Champion of the People