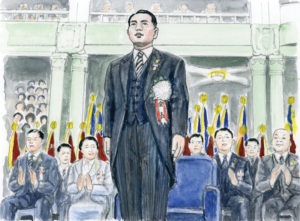 Starting April 3, the day after the memorial service honoring the third anniversary of President Toda’s death, Shin’ichi Yamamoto set out on a series of trips to attend chapter inaugural meetings in Gunma, Niigata, Aichi, Saitama and Shimane prefectures, as well as in the cities of Tokyo and Hiroshima. Whether before or after these meetings, he devoted his spare time to encouraging members.

In Takasaki, Gunma Prefecture, he happily reunited with a group of young men whom he had encouraged the previous year by presenting them with a poem he had composed in his youth (see The New Human Revolution, vol. 4, revised edition, p. 69). He was overjoyed to see how they had grown from the past year.

He also traveled to Kiryu, which had been the first area outside of Tokyo that Josei Toda visited after the war to give guidance. Despite Mr. Toda’s encouragement and guidance, an organization separate from the Soka Gakkai emerged, carrying out similar activities and propagation. Eventually, however, this organization began facing conflicts among its members and became deadlocked. Several years after Mr. Toda’s inauguration as second president, many of its members, after much reflection and deliberation, joined the Soka Gakkai.

In the Chubu region, Shin’ichi visited Gifu Prefecture and spoke with chapter leaders and various other members there. At Matsue in Shimane Prefecture, taking up a writing brush and ink, he wrote in Chinese characters “The voice does the Buddha’s work.” He presented the calligraphy to a newly appointed men’s chapter leader who was anxious about being unable to convincingly speak to the members. And at Fukuyama in Hiroshima Prefecture, Shin’ichi went outside after a chapter inaugural meeting to individually encourage those who had not been able to enter the hall for the meeting.

One year after his inauguration as president, Shin’ichi had engaged in 365 days of intense struggle that led to the great advancement of the organization. He celebrated May 3, 1961, seeing the Soka Gakkai grow to 139 chapters and a total membership of over 1.91 million households. 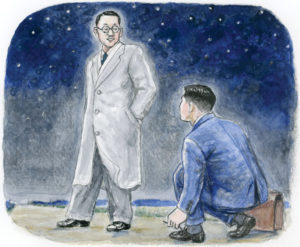 While stopped at Omiya Station on his way to the inaugural meeting of Kumagaya Chapter on April 19, 1958, Shin’ichi fondly recalled a memory of his mentor, second Soka Gakkai President Josei Toda.

It was in 1950, as autumn was beginning to give way to winter. Together, they had called on a certain individual in hopes of finding a solution to the impasse Toda’s business was facing, but to no avail. The prospect of an early way out of their dilemma, something they had pinned such high hopes on, had then vanished …

After their visit, he and Toda had taken a walk alongside a river. Stars twinkled down at them in the frosty stillness. The night sky was beautiful. But the cold bit into them. It was not just the cold of winter that numbed them, but the coldness of the world.

As they walked along, one of his shoes almost fell off. Looking down, he saw that the laces had come undone. The shoes were already worn down at the heels and had holes in them. Bending down to re-tie his laces, Shin’ichi casually sang to himself, “Who turned me into this kind of man?” parodying the line “Who turned me into this kind of woman?” from a then-popular song.

Toda turned around and looked back at him, his eyeglasses sparkling. “I did!” he said, grinning broadly.

Shin’ichi felt something very warm in Toda’s confident and smiling admission of responsibility amid such uncertain and trying times.He thought to himself: “The mentor’s confidence always reveals the truth. So the disciple must respond in kind.” It was a period of bitter hardships, but the days that mentor and disciple spent struggling together were bathed in a warm, golden glow. (NHR-4, revised edition, 74–75)

The most important thing for young people, no matter what your circumstances, is that you never demean yourselves. Faith lets us bring out our limitless potential and enjoy life to the fullest, come what may. The moment you think that you are no good, you stifle your own potential. The key to the future lies entirely in your determination at the present moment. (NHR-4, revised edition, 69)