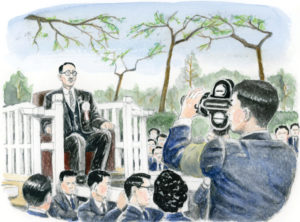 After attending the May 3 Headquarters General Meeting, Shin’ichi Yamamoto had an informal discussion with top youth leaders. He proposed that, starting on May 3, the organization designate 1961 as the Year of Youth. In the second year of his presidency, he would focus on creating a fresh tide of kosen-rufu, centering on the youth division.

Starting with Kyushu, Shin’ichi attended youth division general meetings in each region throughout Japan. He made it a point to meet with youth wherever he went.

At a meeting in Maizuru, Kyoto Prefecture, a young man asked about how to balance work and activities. Shin’ichi responded, saying, “It boils down to making a decision to do your best in everything and then having the determination not to retreat a single step” (The New Human Revolution, vol. 4, revised edition, p. 149). He emphasized that one’s hard work will become precious lifelong treasures.

At the joint inaugural meeting of Kobe and Hyogo chapters, Shin’ichi announced the start of the production of films to document the Soka Gakkai’s efforts for kosen-rufu. While youth division chief of staff, Shin’ichi had filmed major Soka Gakkai events and activities (like the ceremony on March 16, 1958). He assigned a youth leader to oversee the production of these films.

In addition, at the 4th Student Division General meeting, Shin’ichi expressed his wish that the Soka Gakkai youth “join all the world’s people in bonds of friendship” (NHR-4, revised edition, p. 189). At the June Headquarters Leaders Meeting, it was announced that the Soka Gakkai had achieved its membership goal of 2 million households. 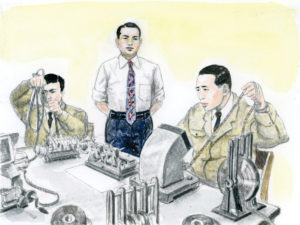 The Struggle of Breaking New Ground Is a Source of Pride

In May 1961, Shin’ichi Yamamoto announced the production of films documenting the Soka Gakkai’s activities. This would be overseen by the newly formed news bureau, which comprised a permanent staff of three young men, including Yoshio Iizaka.

Late one evening, Shin’ichi dropped by their workroom. The two young staff members were hard at work and didn’t even notice the president’s arrival.

When he greeted them, the two looked up with a start. They must have been working late like this for several days in a row and fatigue showed on their faces. They began to rise from their chairs, but Shin’ichi motioned for them to remain seated. “Don’t get up,” he said. “Just tell me what your biggest problem is right now.”

“To tell the truth, we’re out of film,” Iizaka replied. “We’ve already used up our entire budget … ”

He then asked Iizaka how much money was needed for film for the time being and, opening his wallet, made a personal donation to the group.

Flashing a broad smile, Shin’ichi encouraged them, “Mr. Iizaka, I know things are tough now, but that’s always the way it is when you’re breaking new ground.”

If you can produce something truly excellent in spite of all the shortages you face—shortages of staff, of funds, of equipment, of time—it will be something you can be proud of for the rest of your life. That’s what it means to be a pioneer.

“The audience may not see those working behind the camera, but the influence you have will be profound. We can’t see the foundation of a house, either, or the engine of a car. Nor can we see the human heart. All the important things, the things that support existence and keep it running, are hidden.” (NHR-4, revised edition, 172–75)

If we feel that our lives are painful or agonizing, then let’s find a spare moment and pray about our situation. If we pray, then the energy to challenge our circumstances will emerge, and we will definitely find a way to break through. Eventually we will attain a life state where we can do activities and devote ourselves to kosen-rufu to our heart’s content, free of all hindrances. (NHR-4, revised edition, 153)

Volume 4: Chapter Four—Establishing the Correct Teaching for the Peace of the Land