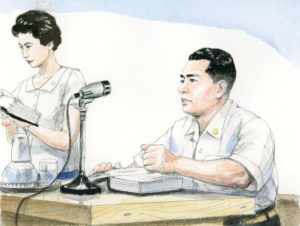 On July 4, 1961, Shin’ichi Yamamoto stood before the grave of his mentor, Josei Toda, and chanted Nam-myoho-renge-kyo three times infused with deep prayer. The previous day, July 3, was when his mentor was released from prison 16 years earlier. That same day four years prior, Shin’ichi had been arrested on unwarranted charges. The words of his mentor, Josei Toda, rang out in his heart: “Fight against the insidious nature of authority! Protect the people!” (The New Human Revolution, vol. 4, revised edition, p. 212). Shin’ichi resolutely vowed to win and prove his innocence in the Osaka Incident trial.

On July 9, he traveled to Tohoku where the last of the youth division general meetings around Japan was held. At the Tohoku Young Men’s Division General Meeting, Shin’ichi declared: “I want to leave completion of the task of kosen-rufu to you, the sturdy young men of Tohoku” (NHR-4. revised edition, 215).

On July 29, at an outdoor training session of the young men’s Suiko-kai training group at Kirigamine in Nagano Prefecture, he urged those gathered to “become leaders who work actively on the global stage for the peace and happiness of all humanity” (NHR-4, revised edition, 223). The next day at the young women’s Kayo-kai outdoor training session, Shin’ichi explained the significance of uniting as one, using the example of a group of volleyball players continually tapping the ball to keep it in play. In July, the young women’s division surpassed a membership of 200,000, while the young men’s division exceeded 300,000.

At the annual summer course, Shin’ichi lectured on Nichiren Daishonin’s treatise “On Establishing the Correct Teaching for the Peace of the Land.”

With an imminent guidance trip to Europe, he vowed to make this the time to widely spread the humanistic philosophy of Nichiren Buddhism to bring people together and to secure the peace of the land. 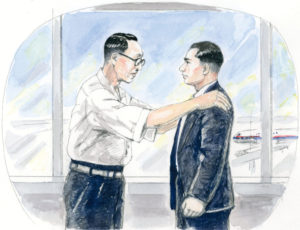 The Mentor’s Fervent Care for His Disciple

On July 4, 1961, as he stood in front of Josei Toda’s grave, Shin’ichi Yamamoto recalled July 3, 1957, when he was falsely accused and arrested for violating election laws.

He would never forget his mentor’s fervent and unceasing love for him, his young disciple. At Haneda Airport in Tokyo, just before Shin’ichi had boarded a plane to present himself voluntarily for questioning at the Osaka Prefectural Police Headquarters, Toda had said to him, “Shin’ichi, should death overtake you, I will rush to your side and throw myself upon you and accompany you in death.”

When Shin’ichi thought of what Toda must have been feeling as they parted at Haneda Airport, tears filled his eyes.

Moreover, Toda had personally gone to the Osaka District Prosecutors Office while Shin’ichi was in detention to protest his young disciple’s unjust arrest. He had felt compelled to do so. Before that, on July 12, he convened a general meeting of members in the Tokyo area at the National Sports Arena in Kuramae to condemn the actions of the Osaka Prefectural Police Headquarters and the Osaka District Prosecutors Office …

Toda was prepared to take Shin’ichi’s place in jail. He was a mentor who would not hesitate to cast away his own life for his disciples.

Once admitted to see the chief prosecutor, he demanded strongly: “How long do you intend to keep my innocent disciple locked up? If it is me you want, arrest me now!” He sought Shin’ichi’s immediate release.

Now, as he stood before his beloved mentor’s grave, Toda’s words rang out in his heart: “Fight against the insidious nature of authority! Protect the people!” (NHR-4, revised edition, 211–12)

Human kindness and consideration are keys to building a good organization. When people feel appreciated, they do their best. (NHR-4, revised edition, 232)