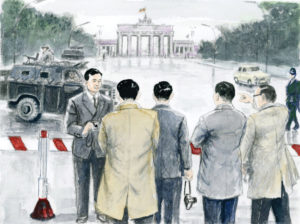 On his first visit to Europe, Shin’ichi Yamamoto arrived on October 5 to his first destination, Copenhagen, Denmark. While on a bus bound for the city center, he thought of N.F.S. Grundtvig, the “father of the Danish renaissance,” and his young successor, Kristen Kold, who both worked to make higher education accessible to the general public. This led Shin’ichi to renew his determination to establish a network of schools based on the ideals of value-creating education entrusted to him by his predecessors, Tsunesaburo Makiguchi and Josei Toda.

At his hotel, he encouraged a young men’s division member from Japan who was in Denmark on business.

On the 7th, Shin’ichi and his party entered Dusseldorf in then-West Germany, and, while visiting the banks of the Rhine River, they discussed the Nazi oppression of the Jewish people.

The following day, the party arrived by plane to West Berlin, where they visited the border of East and West Berlin. Shin’ichi stood before the Berlin Wall, which had robbed people of their freedom, separated friends and families, and denied the right for them to live together and to communicate with one another. He vividly recalled the Declaration for the Abolition of Nuclear Weapons containing Josei Toda’s spiritual legacy “to tear out the talons of the devilish nature latent in human life” (The New Human Revolution, vol. 4, revised edition, p. 318).

As his surroundings were bathed in the brilliant golden rays of the setting sun, Shin’ichi looked up at the Brandenburg Gate and said to his colleagues, “I am sure that in thirty years this Berlin Wall will no longer stand” (NHR-4, revised edition, 319). It was an expression of his resolute determination to dedicate his life, even die if need be, for the cause of realizing world peace. 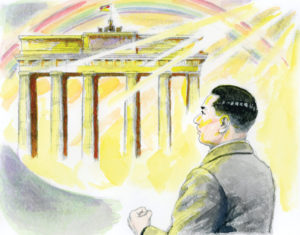 Shine the Light of Peace Across the World

On October 8, 1961, Shin’ichi Yamamoto stood in front of the Brandenburg Gate, which separated East and West Berlin. It became a symbol of a world divided by the Cold War.

The setting sun’s golden rays bathed nearby steeples and buildings, the closed road and the Brandenburg Gate.

“Once the sun rises and the clouds lift,” Shin’ichi mused, “everything becomes suffused with golden light. If the sun of life were to shine in people’s hearts, the world would definitely be bathed in the light of peace, and a glorious rainbow of friendship would appear over humanity.”

Looking up at the Brandenburg Gate, he said with conviction to his colleagues, “I am sure that in thirty years this Berlin Wall will no longer stand.”

He was not merely making a prediction or articulating wishful thinking. He uttered these words based on his unwavering confidence that the conscience, wisdom and courage of people dedicated to realizing peace would triumph. It was also an expression of his resolute determination to dedicate his life, even die if need be, for the cause of realizing world peace. Buddhism teaches that one’s deep inner resolve can permeate the entire universe.

He vowed in his heart: “I will fight to see the end of this wall. I’ll fight for peace. This struggle will entail igniting the same spark or commitment in others and pursuing dialogue to awaken people to their inner humanity. I will dedicate my life to this endeavor.”

Shin’ichi faced the Brandenburg Gate and chanted three times, “Nam-myoho-renge-kyo … ” Filled with his deep pledge and determination, his voice resounded in the sunset skies over Berlin. (NHR-4, revised edition, 318–19)

Life may seem long … but it is actually very short. Our youth, especially, passes by in the twinkling of an eye. The Soka Gakkai is now looking toward the future, aiming for dynamic growth. The time has come for us to engage in an all-out struggle for kosen-rufu. The time is now. (NHR-4, revised edition, 280)

Volume 4: Chapter Four—Establishing the Correct Teaching for the Peace of the Land

Excerpts From Nichiren’s Writings in Volume 4