This installment, published in the January 23, 2019, issue of the Seikyo Shimbun, focuses on passages from Nichiren Daishonin’s writings that SGI President Ikeda discussed in volume 4 of The New Human Revolution.

“Surely you are sowing good seeds in a field of fortune. My tears never cease to flow when I think of it.” (“The Bodies and Minds of Ordinary Beings,” The Writings of Nichiren Daishonin, vol. 1, p. 1134) 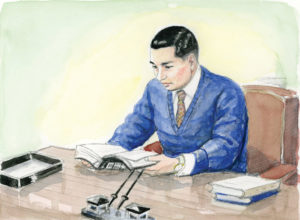 Approaching the one-year anniversary of his inauguration as third Soka Gakkai president, Shin’ichi was absorbed in thought about the spirit of offerings.

Dedicating oneself to kosen-rufu means “sowing good seeds in a field of fortune”—Shin’ichi had been strongly convinced of this since his youth. He recalled his days of earnestly striving to protect and support Josei Toda, who took leadership to widely propagate the Daishonin’s teachings. Back then, Toda’s business was experiencing severe difficulties, and for a long time payment of Shin’ichi’s salary was in arrears.

Shin’ichi realized that to support this great lion of a man, who had arisen alone to spread the Law, was the way to protect the Soka Gakkai and to accomplish the goal of kosen-rufu.

He drastically cut his living expenses and made it his creed to use even a little of the money remaining from his pay to support Soka Gakkai activities, to contribute to spreading Nichiren Buddhism. To do so was his joy and secret pride. Because of this, he even spent an entire winter without an overcoat. Whenever he received some of his back salary, he would use a sizable portion of it to support Toda’s activities to promote kosen-rufu. Shin’ichi was absolutely convinced that the benefit and good fortune he had acquired as a result had enabled him to overcome his illness and today assume the Soka Gakkai’s leadership with confidence and composure.

He had not acted to support his mentor or the organization at someone else’s behest. He had done so spontaneously, with a spirit of cheerfulness. It was an expression of his sincere faith, a reflection of his profound resolve to dedicate his life to spreading Nichiren Buddhism throughout the world. (The New Human Revolution, vol. 4, revised edition, pp. 118–19)

“If you care anything about your personal security, you should first of all pray for order and tranquillity throughout the four quarters of the land, should you not?” (“On Establishing the Correct Teaching,” WND-1, 24)

Our Mission as Buddhists 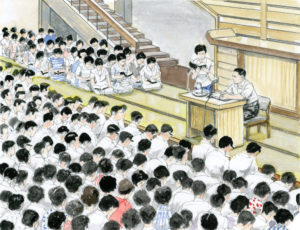 At the summer training course held in August 1961, Shin’ichi Yamamoto lectured on “On Establishing the Correct Teaching for the Peace of the Land.”

“This clearly expresses the attitude and posture we should have as Buddhists. People of genuine religious faith do not care only for their own comfort and safety; they are not content to confine themselves to their own private realm. To be truly human means working and praying to solve the problems that plague all people and to achieve peace and prosperity for society. There is no Buddhism apart from human society. A religion that divorces itself from society and seeks only serenity in the afterworld is already dead. It is not a religion in the true sense of the word—it is not a religion for the people. Yet such is the prevailing image of religion in Japan. This is because the government has rendered Japanese religion lifeless.”

“A person who prays for a peaceful and secure society and is considerate toward others will naturally become aware of the need to contribute to society and will act on that awareness. The Soka Gakkai’s goal is to realize the peaceful society described in ‘On Establishing the Correct Teaching for the Peace of the Land.’ Our mission is to rid this world of every human affliction—war, poverty, starvation, disease and discrimination.

“With this goal in mind, then, what’s important is what we do to actually achieve it. Without real effort, it’s all just a fantasy, an abstraction.” (NHR-4, revised edition, 256–57)

Within this core principle of Nichiren Buddhism, the idea “establishing the correct teaching” signifies the propagation of the Mystic Law with the aim of having the dignity of life as espoused in Nichiren Buddhism take root as a guiding principle of society. And the idea of realizing “peace of the land” relates to actualizing peace and prosperity in the world.

In Nichiren’s handwritten manuscript of this treatise, he uses three Chinese characters for “land.” While it was common in those times to use the characters for “land” that represented the “king” within his domain or protecting that domain with military might, Nichiren overwhelmingly used the character portraying ordinary people within a domain. This conveys Nichiren’s view that the “peace of the land” becomes a reality in a place where people’s happiness is given top priority.

“On Establishing the Correct Teaching for the Peace of the Land” is written in the format of a dialogue between a guest who laments the deplorable state of society and his host. This signifies the essential nature of Nichiren Buddhism as a religion of dialogue.

Wang Binggen, the former director of China’s Bing Xin Literature Museum, has said: “I believe that the readiness for dialogue and the spirit of dialogue taught and carried out by SGI President Ikeda is the most efficacious and treasured path for resolving all manner of conflict and building a harmonious world.”

Though it may often seem that the one-to-one dialogues we carry out on a daily basis are mundane and fail to stand out, when we engage in such dialogues with the spirit of “establishing the correct teaching for the peace of the land,” we can be confident that we are traversing the same treasured path established by President Ikeda that leads to indestructible peace.

Engaging in Dialogue With Bright and Open Hearts