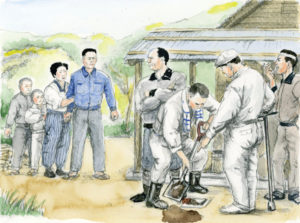 Shin’ichi Yamamoto returned to Japan from his tour of Asian countries on February 14, 1961. Two days later, on February 16, he attended the inaugural meeting of Hojo Chapter held in Toyohashi City in Aichi Prefecture.

From there, he went on to attend meetings throughout Japan.

At the time, Shin’ichi had been engaged in an ongoing court case that had become an intense struggle to defend himself from vicious attacks by the authorities. In July 1957, he had been wrongfully charged with violating election laws during a House of Councillors by-election in Osaka that same year. Known as the Osaka Incident, by 1961, this court case was approaching a crucial stage.

At around this time, there was a sharp increase in the number of incidents where Soka Gakkai members were unjustly ostracized in their communities for refusing to make donations to or participate in events at local Shinto shrines and Buddhist temples. Shin’ichi realized that the more kosen-rufu advanced, the stronger would be the storms of adversity. He determined that he would support all the members in becoming people of strong faith who could face and triumph over any hardship.

On April 2, amid a spring storm, he attended a memorial service honoring the third anniversary of President Toda’s passing. 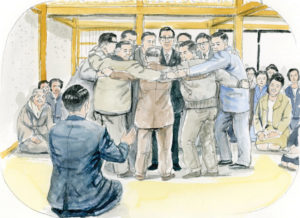 Unity is the Driving Force of Kosen-rufu

In November 1958, during a discussion of establishing Aomori Chapter, Shin’ichi Yamamoto asked the newly appointed chapter leader, Tadashi Kaneki, and the nine new district leaders to come up to the front.

Tadashi Kaneki and the nine other men filed down to the front of the room. Shin’ichi then said: “Okay. Now I’d like you to form a circle around Mr. Kaneki and put your arms on the shoulder of the person standing next to you.”

Looking perplexed, they all moved to stand in a circle with Kaneki in the center. The other members in the room watched expectantly, their eyes shining, wondering what was about to happen.

“Is this what you mean?” one of the men in the circle ventured, checking to see if they had followed his instructions correctly.

“Yes, that’s fine. Please, everyone, I’d like you always to remember this picture. It’s an example of the unity that Aomori Chapter should aim for. If the nine district leaders firmly unite around the chapter leader, no one can disrupt your solidarity. However, if this circle is broken and the nine district leaders become disconnected and out of sync with one another, confusion and disorder will soon result. Unity is strength …

“Those of you who will become district leaders, please do your utmost to support and protect the chapter leader. And Mr. Kaneki, as chapter leader, please do everything in your power to assist the district leaders and work for the happiness of all the members in the chapter. If you protect the members, you in turn will be protected. This is the Buddhist law of cause and effect …

“Therefore, no matter what may happen in the future, please never forget this circle. Base yourselves on faith and place unity first so you can make Aomori the warmest and most harmonious chapter in all Japan.” (The New Human Revolution, revised edition, vol. 4, pp. 18–19)

Buddhism constitutes the highest form of reason. Those of us who believe in this Buddhism should always strive to be courteous and circumspect in our behavior. (NHR-4, revised edition, 2)