Volume 4 of The New Human Revolution is set in 1961, the year following Shin’ichi Yamamoto’s inauguration as third president of the Soka Gakkai. It was a time when the kosen-rufu movement was developing dynamically, with the year’s goal of reaching a membership of 2 million households already achieved by the end of June. Nevertheless, it is important to keep in mind that the backdrop against which these events took place were extremely challenging.

The court case resulting from the Osaka Incident[1] was approaching a critical stage at this time. On July 3, 1957, Shin’ichi had been arrested on charges of election law violations, which were ultimately proven groundless. The court case began in October that year, and the outcome was looking grim, with one of Shin’ichi’s lawyers even telling him he should prepare himself for a guilty verdict. Despite all this, Shin’ichi continued to take the lead for kosen-rufu.

Further, an increasing number of Soka Gakkai members were being ostracized and discriminated against, and the “Spring Storm” chapter depicts such incidents in various communities across Japan. These were all ostensibly based on members refusing to participate in ceremonies at local temples or shrines or to make donations, but the underlying reason was actually that those connected to the established temples and shrines feared that the Soka Gakkai’s propagation activities might jeopardize their interests.

Hearing about these incidents, Shin’ichi encourages the members:

When viewed over the course of your entire life, this trial [of being ostracized] will last for but an instant. If anything, it will remain as a wonderful memory of your faith and practice.[2]

His words were based on the conviction that what these members needed far more than his sympathy was the unyielding faith to stand firm in the face of any storm. This, he believed, was the only sure path to eternal victory. He regarded these successive obstacles as opportunities for the members to develop into people of strong faith who could face any adversity.

Let us also develop this kind of indomitable faith as we continue to forge ahead with our lives.

The Spirit of Joyful Offerings

In the “Triumph” chapter, we find an explanation of the spirit behind making offerings in Buddhism. The phrase joyful offering refers to the act of making a sincere offering for the sake of the Law without seeking anything in return. The chapter goes on to describe an episode from the Buddhist sutras about a wealthy merchant named Sudatta who makes a sincere and joyful offering. It illustrates that such an offering arising from pure faith is indeed the truest of all offerings and the wellspring of abundant good fortune.

The spirit of joyful offering elevates our state of life and produces immeasurable benefit. This, in turn, deepens our conviction in faith. It is an unchanging equation for consolidating the foundation of happiness in our lives.[3]

In those days, many members were struggling with financial hardship and poor health. Though the Soka Gakkai was at a stage where it could consider grand projects such as the construction of culture centers around the country, Shin’ichi is hesitant to call for donations from members who are struggling. He returns to The Writings of Nichiren Daishonin to underscore the true meaning of Buddhist offering, and after much deliberation, decides to provide all members with the opportunity to make financial contributions, making the following vow in his heart:

Though they may be poor now, they are certain to become people of great wealth in the future. I’ll do everything in my power to make sure this happens. I must praise their sincerity and warmly support them, revering them as I would Buddhas.[4]

In the same way, the Soka Gakkai’s current approach toward the use of audiovisual technology is predicated on a passage in the “Fresh Leaves” chapter, which describes how the Soka Gakkai started to produce films and documentaries. Appreciating the potential of the audiovisual medium, Shin’ichi proposes that the Soka Gakkai produce films to document its activities. He also discusses future plans with the production staff, suggesting that, in addition to color films, they could one day produce dramatizations of the experiences of the members as well. This vision is the origin of today’s Soka Channel VOD (video on demand) service in Japan.

The Seeds of Growth

During the second year of his presidency, Shin’ichi focused his efforts on the development of the youth division, and the “Fresh Leaves” chapter outlines several essential steps for young people to fulfill their potential. Here, I would like to comment on three of these.

The first is to awaken to one’s mission. Even before he assumed any leadership position, Shin’ichi had striven to fully actualize President Toda’s vision for kosen-rufu by taking complete responsibility for the Soka Gakkai:

As a disciple who strove to make his mentor’s heart his own, he felt a deep sense of personal responsibility for every aspect of the Gakkai … Such determination, though intangible and invisible, is the very seed of growth.[5]

The second is to decide whom to take as one’s mentor. In the same chapter, there is a reference to a young men’s division leader in Kyushu:

He modeled his behavior after that of Shin’ichi, whom he looked up to as his mentor; in any situation, he would always ask himself what Shin’ichi would do if he were in his place.[6]

Indeed, the driving force for growth is a single-minded resolve to always stand alongside one’s mentor.

The third is to find a way to strike a balance between all aspects of one’s life, both work and Soka Gakkai activities. Shin’ichi encourages a young man who is struggling to participate in activities because of his busy work schedule, saying:

While we are young … we should exert ourselves so that we can honestly say that we’ve done our best in both our work and Gakkai activities. That’s because our efforts during this time will become the foundation for our entire lives.[7]

A path to victory will inevitably open up when one determines to do one’s best in every endeavor, basing one’s actions on sincere prayer.

In addition to outlining the keys to enable young people to fulfill their potential, volume 4 also refers to the attitudes of those who are responsible for nurturing them. The “Establishing the Correct Teaching for the Peace of the Land” chapter describes Shin’ichi’s personal mindset as he strives to keep young people continuously inspired. He outlines three principles to which he abides:

Shin’ichi knew that the only way to accomplish this was to never lose sight of his own source of inspiration, his mentor, Josei Toda … He also knew that he must never forget his own spirit to seek Buddhism and challenge his limitations—that he must continuously educate and improve himself, and keep growing as a human being. Certain that the best way to inspire young people was through his own example, Shin’ichi vowed to act unselfishly and devote his life to bringing happiness to all humanity.[8]

I hope that those of us who are involved in nurturing young people will inherit Shin’ichi’s spirit.

In the “Fresh Leaves” chapter, there is also mention of a women’s leader in Kyushu who died suddenly in June 1961. She had always dreamed of going to Europe to spread Nichiren Buddhism. The “Great Light” chapter describes how, during his first European guidance tour in October that year, Shin’ichi makes it a point to buy some ornamental plates to give to her children. He remarks to his companions:

Many tend to forget the dead. But I can never forget the friends who have fought by my side and shared my trials and hardships—all the more so if they have left family behind. I shall always support and encourage those families warmly, as long as I live.[9]

The Soka Gakkai is a world of genuine encouragement. Let us embrace Sensei’s spirit and continue to expand our network of hope.

Translated from the January 30, 2019, issue of the Seikyo Shimbun, the Soka Gakkai’s daily newspaper. 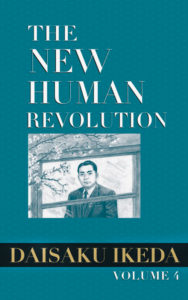 Triumph
The Soka Gakkai Headquarters general meeting celebrating the first anniversary of Shin’ichi’s inauguration is held with representatives from the United States and Brazil in attendance.

Great Light
Shin’ichi departs on his first journey for peace in Europe. Standing in front of the Berlin Wall, he vows to dedicate his life for the cause of world peace.