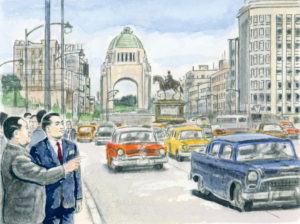 On August 14, Shin’ichi Yamamoto traveled to Los Angeles. Right before his departure, protests in response to racial discrimination in the city exploded into massive riots. After hearing reports on the situation in Los Angeles, a leader scheduled to travel with Shin’ichi suggested that he postpone his travel plans. Shin’ichi responded by saying that it’s precisely because of the events in Los Angeles that now is that time to widely spread the Buddhist philosophy of equality in America. With this strong determination, he departed for Los Angeles.

On August 15, the first Soka Gakkai outdoor culture festival in the United States was held. Shin’ichi put his heart and soul into encouraging the American members. After the festival concluded, he firmly shook hands with an African American youth who had suffered racial discrimination and shared his thoughts on how to achieve kosen-rufu in America.

On August 17, Shin’ichi and his party flew to Mexico, a country that his mentor, second Soka Gakkai President Josei Toda, had dreamed about and longed to visit.

Thinking of how he was actually walking through the streets of Mexico City on behalf of his mentor, Shin’ichi was overcome with emotion. He vowed to create a brilliant realm of happiness in Mexico.

Bringing fresh winds of happiness to the United States and Mexico, Shin’ichi returned to Japan. Starting in Osaka, he held many photo sessions throughout Japan with group men’s and women’s leaders who were fighting on the front lines of the organization. 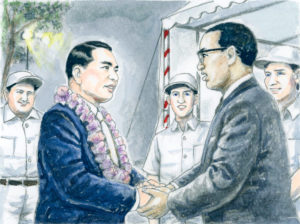 In August 1965, a riot triggered by racial discrimination erupted in the Watts neighborhood of Los Angeles. Despite the chaos, Shin’ichi Yamamoto visited the United States as scheduled, attending a culture festival on August 15 in Etiwanda, located several miles east of Los Angeles, where he met a young African American man.

When the trouble broke out in Watts, members in other areas, concerned about the safety of their fellow members living in the riot zone, opened their homes to them and offered them rides to and from rehearsals. This love and friend-ship resulted in a splendidly unified performance.

On the way to the car, Shin’ichi stopped to offer encouragement and shake hands with each of the youthful event staff members he encountered, saying: “Thank you! You did a fine job!”

While Shin’ichi was shaking hands with staff members, a young African American man rushed up to him and extended his hand. Shin’ichi grasped it and the youth began speaking excitedly.

“President Yamamoto, thank you so much for coming to the United States at this dangerous time when riots are happening in Watts. Your actions have shown me what courage really is. You also have taught me the spirit of a leader dedicated to realizing peace for all people. My own courage has increased a hundredfold. Someday we will build, through our own efforts, a peaceful and harmonious society free of racial conflict in America. Please rest assured of that.” Tears streaked the young man’s face.

Shin’ichi replied: “Thank you! If you have solidified your resolve to achieve kosen-rufu, I can safely say that my purpose in coming to this country has been fulfilled. It’s enough for a single individual, for you, to rise up with the same spirit as me. Just as a great river begins from a single drop, a great river of peace in America will begin from you. I entrust America to you.”

The young man clutched Shin’ichi’s hand in both of his and shook it firmly. Both men’s eyes shone with emotion. (The New Human Revolution, vol. 10, pp. 104–08)

A person who makes a firm determination to work for kosen-rufu is strong. From such determination wisdom, life force, success and victory in life are born. (NHR-10, 127)

Volume 10: Chapter One—Bastion of the Pen