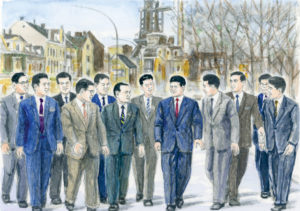 On October 19, Shin’ichi Yamamoto departed for Europe with the goal of opening new paths for cultural exchange.

In Paris, he attended a ceremony to mark the opening of the Soka Gakkai Europe office, which was located in the home of Europe Headquarters Leader Eiji Kawasaki. During this ceremony, Shin’ichi announced that Europe would become a general headquarters encompassing two new headquarters. During this ceremony, he also appointed on the spot a women’s division member who had traveled from Nigeria as the leader of the newly formed Africa Chapter.

During a guidance meeting on October 21, a new district was formed in Belgium, and leadership appointments were announced for London District.

Following this, in West Germany, Shin’ichi reunited with youth who, inspired by their passion to contribute to worldwide kosen-rufu, had moved there from Japan to work in the coal mines. He praised the youth for having taken on the mission of forging a new course for kosen-rufu and expressed high expectations for their development.

On October 24, Shin’ichi and his party landed in Milan, Italy. Eisuke Akizuki, executive vice president of the Min-On Concert Association, visited La Scala opera house to discuss the possibility of inviting its opera company to perform in Japan.

During this trip, Shin’ichi also visited the south of France, Spain and Portugal. In Lisbon, Portugal, he and his companions came upon The Monument to the Discoveries, which commemorated the 500th anniversary of the death of Prince Henry the Navigator. At this monument, Shin’ichi refreshed his vow to embark on a great voyage for kosen-rufu that would open a new course to peace. 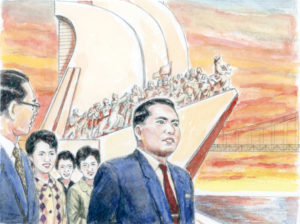 Sail Beyond Your “Cape of Fears”!

On October 27, while in Lisbon, Portugal, Shin’ichi Yamamoto visited the Monument to the Discoveries, which commemorated the 500th anniversary of the death of Prince Henry the Navigator who had contributed to Portugal becoming a dominant power in the Great Age of Discovery.

No matter how many attempts the navigators trained by Prince Henry made to explore the west coast of Africa, they could not open a new course to Asia. This was because they refused to go beyond Cape Bojador, some 150 miles south of the Canary Islands. Everyone still believed the myths and legends about the area that had persisted since the Middle Ages—in other words, that it was a “Sea of Darkness” of boiling waters and monsters from which no ship ever returned.

Prince Henry called on the explorers to sail past the cape, to be courageous and cast aside baseless superstitions. One of his attendants, Gil Eannes, rose to that call … He vowed that he would not return until he was successful.

In 1434, Eannes came back to Prince Henry with the news that he had sailed past Cape Bojador.

The success of Eannes’ voyage was just a small step. Having merely sailed a short distance past the cape, he was far from discovering a route leading to the East. But the significance of his achievement was immeasurably vast. He had revealed that the much-feared Sea of Darkness beyond Cape Bojador was actually no different than the rest of the ocean, thus dispelling the dark cloud of superstition obscuring people’s minds. Indeed, the Sea of Darkness existed only in the mind. With the rudder of courage, Eannes succeeded in sailing beyond his own personal “cape of fears.”

Shin’ichi spoke with great feeling: “The history of Portugal teaches us that without courage there can be no progress or victory. As Nichiren Daishonin implies when he says: ‘Nichiren’s disciples cannot accomplish anything if they are cowardly’ (“The Teaching, Practice, and Proof,” The Writings of Nichiren Daishonin, vol. 1, p. 481), kosen-rufu cannot be accomplished if we are fainthearted. A new course of kosen-rufu will be forged through courage. We must sail beyond our own personal ‘cape of fears.’” (The New Human Revolution, vol. 10, pp. 237–38)

Our innermost determination can move the universe. Because cause and effect are simultaneous, all results are encompassed in our present resolve. Determination is not just words. True determination contains earnest prayer and brims with concentrated energy. It gives rise to wholehearted action and leads without fail to splendid victory. (NHR-10, 211–12)