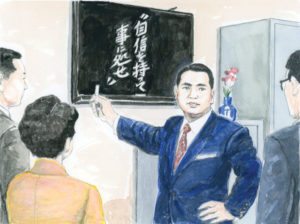 Shin’ichi Yamamoto returned to Japan from Europe on October 31 and immediately organized a steering committee to establish Soka University. This would be a significant first step on the path to realizing the vision of his mentors, first and second Soka Gakkai Presidents Tsunesaburo Makiguchi and Josei Toda.

In November and December, Shin’ichi poured his energies into traveling throughout Japan to encourage members, taking commemorative photos in each locale as a means to do so. He wholeheartedly encouraged members who were steeped in various sufferings, including two sisters who had striven in their Buddhist practice despite losing their mother at young ages and having a father who had opposed their faith.

Shin’ichi also wanted to ensure that the organization never became bureaucratic. Toward this end, he devoted great attention to nurturing the Soka Gakkai Headquarters staff, who composed the core of the organization’s leadership. One day toward the end of the year, he made a detailed inspection of every department of the Soka Gakkai Headquarters and Seikyo Shimbun offices, praising staff members he met who were diligently working behind the scenes.

On January 14, 1966, Shin’ichi departed for Hawaii, attending the opening of a new Soka Gakkai community center, while also striving with the ferocity of a charging lion to open the way for the future development of kosen-rufu there.

On February 27, the formation of the men’s division was announced at the Headquarters Leaders Meeting, and on March 5, a ceremony marking the establishment of the division was held. On this occasion, Shin’ichi gave the men’s division guidance to become “golden pillars,” supporting the castle of Soka. Filled with pride, these crowned champions, great generals of the Mystic Law, began their gallant march into the future. 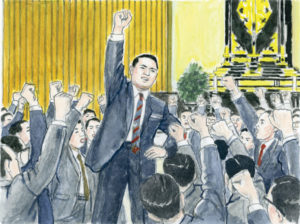 Stand Up, Golden Pillars of Soka!

On March 5, 1966, the men’s division establishment ceremony was held at the Soka Gakkai Headquarters, where Shin’ichi Yamamoto gave the following guidance.

Shin’ichi’s voice grew more forceful: “You, the members of the men’s division, are entering a period of securing the foundation for the final chapter of your lives. Each of you possesses great ability. I hope you will apply all of your talents to the advancement of kosen-rufu.

“The Daishonin writes: ‘Since death is the same in either case, you should be willing to offer your life for the Lotus Sutra. Think of this offering as a drop of dew rejoining the ocean, or a speck of dust returning to the earth’ (“The Dragon Gate,” The Writings of Nichiren Daishonin, vol. 1, p. 1003). Because none of us can escape death, the Daishonin urges us to give our lives for the sake of the Lotus Sutra, the eternal Law of life. In other words, he tells us to use our lives working for kosen-rufu.

“That is the only way to become one with the Mystic Law, the great life of the universe, and to live an eternal life, just as a dew drop rejoins the ocean and a speck of dust returns to the earth. A lifetime passes quickly. And the period in that lifetime when we can be energetic and active is limited. Once people reach middle age, it all seems to go by in an instant.

“If you don’t stand up now, when will you? If you don’t exert yourselves now, when will you? How many decades do you intend to wait before you take your stand? There is no telling what condition you will be in then. You are in the prime of your life. It is a precious time in this present finite existence. I say this because I want you to have no regrets!”

“I am also a member of the men’s division. I hope that you will join me and rise up valiantly with the Gakkai spirit and become golden pillars supporting the citadel of Soka.”

Shin’ichi bowed to the participants and made way to leave the room. Then he stopped, raised his fist and called out: “Everyone! Let’s strive together! Let’s make a history of fresh achievements! If we are going to live this life, let us use it striving dynamically for the sake of the Law!” The members raised their fists in response and shouted out in agreement. Tears shone in many an eye. Their hearts burned with fighting spirit. Filled with pride, these crown champions, great warriors of the Mystic Law, began their gallant march into the future. (The New Human Revolution, vol. 10, pp. 321–24)

To treasure each person, to share their sufferings and to protect them is the spirit of Nichiren Daishonin, the Buddha of the Latter Day of the Law, and the spirit of the Soka Gakkai. It is also the starting point of humanism. (NHR-10, 268)

Excerpts From Nichiren’s Writings in Volume 10