This installment, published in the July 24, 2019, issue of the Seikyo Shimbun, focuses on passages from Nichiren Daishonin’s writings that SGI President Ikeda discussed in volume 10 of The New Human Revolution.

“Human beings are equally vulnerable. They give their lives for shallow, worldly matters but rarely for the Buddha’s precious teachings. Small wonder they do not attain Buddhahood.” (“Letter From Sado,” The Writings of Nichiren Daishonin, vol. 1, p. 301)

Kosen-rufu Is the Supreme and Ultimate Way of Life 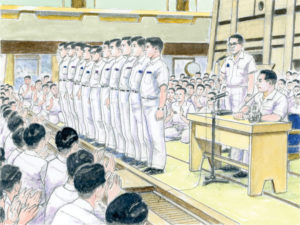 In the summer of 1965, ten young men’s division members decided to move from Japan to West Germany, driven by their passionate resolve to advance worldwide kosen-rufu.

The members going to West Germany were firmly determined to do their best to advance kosen-rufu there. They cared nothing for property, wealth, social status or recognition, and had not the slightest desire to live easy lives or to be better than others. Having pondered the best way for human beings to live in light of the unchanging teachings of Buddhism, they each concluded that spreading those teachings, which would lead to the realization of peace and happiness for all humanity, was the supreme and ultimate way of life. They were thus resolved to give themselves completely to this cause.

This was the feeling of many of the young people in the Soka Gakkai. Those caught up solely in the pursuit of their own immediate personal desires do not understand the nobility of this spirit.

Life is infinitely valuable; there is no greater treasure. The most important challenge we therefore face is how and to what purpose we should dedicate our precious lives.

The Daishonin tells us to use our lives to spread Buddhism—in other words, to use our lives for kosen-rufu. For that is the direct path to attaining Buddhahood, the state of absolute happiness, in this life. (The New Human Revolution, vol. 10, pp. 195–96)

Sickness Is Not the Cause of Unhappiness 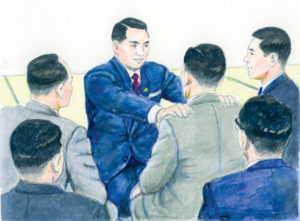 In November and December of 1965, Shin’ichi Yamamoto traveled around Japan to encourage the members. At a commemorative photo session in Nara Prefecture, he gave heartfelt guidance to a men’s division member struggling with illness.

“People in modern society have been described as being only half-healthy, meaning that we are all afflicted with some kind of illness and that our physical health will decline as we age. But is sickness necessarily the cause of unhappiness? Absolutely not. It is being defeated by illness and losing hope that makes us unhappy. We become unhappy when we forget our mission to strive for kosen-rufu …

“At life’s most fundamental level, health and sickness are one. There are times when our life manifests a healthy condition and times when it manifests illness. The two conditions are interconnected. Thus, by making earnest efforts in faith and fighting against illness, we can establish a state of genuine health both mentally and physically.”

“I hope you will live in such a way that others struggling with the same condition will marvel and say: ‘Look how energetic he is, despite his diabetes!’ ‘Look at what a long life he is enjoying!’ ‘Look how happy he is!’ If you are able to do that, you will be a brilliant example of the power of Buddhism. That is your mission in life.” (NHR-10, 251–53)

Learning From the Kosen-rufu Movement in Mexico

The “Winds of Happiness” chapter in volume 10 of The New Human Revolution describes the time when Shin’ichi Yamamoto first traveled to Mexico in August 1965.

For him, this trip to Mexico had special significance. In March 1958, just before his mentor passed away, Josei Toda said to him: “Shin’ichi, yesterday I dreamt I went to Mexico. They were all waiting. Everyone was waiting. They were all seeking Nichiren Daishonin’s Buddhism” (The New Human Revolution, vol. 10, p. 116).

At the time of his visit, there were only 26 households in Mexico, indicating that kosen-rufu in the country was just beginning.

Knowing that in three years Mexico would be hosting the Olympics, he suggested aiming to have by that time 500 households practicing Nichiren Buddhism. This became the vow of the members there.

The novel describes their feelings at that time: “Each person was determined to fulfill their vow to President Yamamoto, even if they had to wage a solitary struggle. Each rose with a stand-alone spirit” (NHR-10, p. 135).

At times, some members traveled more than 600 miles, taking up to one week to travel to and from their homes to carry out dialogues about Buddhism, teach people how to do gongyo and expand the Soka network in Mexico. Rather than regarding their efforts for kosen-rufu as hardships, these pioneering members diligently worked to spread Buddhism from one friend to another. As a result, by the time of the 1968 Olympics, the Mexican members had fulfilled their vow with Shin’ichi, growing their organization to 700 households—27 times what it had been just three years prior.

No matter the environment or circumstances, kosen-rufu begins with just one person who decides to open up a new path and create a new history. Through learning about the beginnings of kosen-rufu in Mexico, we can find the universal formula for expanding our Soka movement.

Young Phoenixes Soar Into the Future