The following is an excerpt from Soka Gakkai President Minoru Harada’s speech during the 44th Soka Gakkai Headquarters Leaders Meeting of the New Era of Worldwide Kosen-rufu, held on Nov. 18 in Tokyo. The text appeared in the Nov. 24 issue of the Seikyo Shimbun, the Soka Gakkai’s daily newspaper. 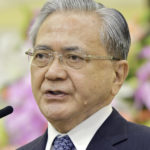 My heartfelt congratulations on the 44th Headquarters Leaders Meeting of the New Era of Worldwide Kosen-rufu and the SGI General Meeting, both being held in resounding victory to celebrate Nov. 18, the Soka Gakkai’s founding!

I extend my warmest welcome and greetings to the 280 SGI members from 65 countries and territories who are here to participate in the Autumn Training Course.

Allow me to begin by reporting to you of my reappointment to the important responsibility of president of the organization. In 2006, when I was first appointed to this position, I received the following guidance from SGI President Ikeda, who said:

Every member advancing with the awareness and pride of being a president of the Soka Gakkai, every member striving on the front lines for kosen-rufu—this is the eternal spirit of the Soka Gakkai. With that in mind, I ask newly appointed Soka Gakkai President Minoru Harada to serve our members with complete dedication and sincerity. (Dec. 8, 2006, World Tribune, p. 2)

As if receiving this guidance once again from President Ikeda, I am determined to commit myself to serving all the members with “complete dedication and sincerity on the front lines for kosen-rufu.” Thank you very much for this opportunity.

. . . The long-anticipated World Seikyo Center is now open, and a commemorative gongyo meeting was held, attended by the SGI leaders here today. Your unprecedented efforts to increase our newspaper subscriptions at this auspicious time have made this day a truly sublime occasion. Thank you very much!

It is imperative that from now, we continue to nurture the seeds of Buddha-hood that we are sowing with the “water” of dialogue and the “sun” of prayer.

Next year (2020), in the Year of Advancement and Capable People, May 3 will mark the 60th anniversary of Sensei’s inauguration as president. Thus, May 3, 2020, is our next milestone.

As disciples of Sensei, our mentor in propagation, let us honor his 60th anniversary by producing great propagation results.

On that note, I’d like to reaffirm with you our basic attitude regarding propagation.

Second Soka Gakkai President Josei Toda once offered this explanation: “[Bankers count money. Publishers are always calculating how many books they’ve printed and sold.] We of the Soka Gakkai—committed to protecting life, the most precious treasure in all the world—count how many people we have introduced to the Mystic Law and led to happiness” (Aug. 17, 2012, World Tribune, p. 3).

The purpose of advancing kosen-rufu lies in how many people we have guided to genuine happiness.

What’s important is not merely for people to join the Soka Gakkai, but the commitment new members make to practice Buddhism. Each person should wholeheartedly want to join and be determined to practice, with support from their family. Participating in discussion meetings and continuing to subscribe to and read our publications are also key. Let’s fully support our friends in this way so that each person who joins has what they need to sustain their faith and advance on the path of happiness.

President Ikeda offered the following guidance: “Faith is not some abstract notion. It is real. In the real world that we live in, faith equals daily life and Buddhism equals society, and so it comes down to whether we win or lose. Have we become happy or unhappy? Faith is what enables us to triumph in a world that’s focused on results, a world that is judged by reality” (tentative translation).

This is why the Soka Gakkai is not engaged in a numbers game; we are focused on actual outcomes. Propagation is not complete when someone joins the Soka Gakkai. Instead, it is only complete when that new member becomes happy and is victorious. In other words, we must foster capable individuals.

Today, the Soka Gakkai’s group system, centered on where members live, has become core to the way we organize ourselves.

However, before the transition to this group system, new members would join the group where their sponsors practiced. This new group system based on geographic location was announced on May 3, 1970, 10 years after Sensei became president.

At the time, he called for the adoption of a new theme: “Build a Soka Gakkai accepted and trusted by the community.” And he instituted the move to the current group system.

He expressed his sentiments for doing so in The New Human Revolution, writing: “It was vital to make the structural transition and establish a strong heart-to-heart network among the members and the other people living in the same local community. This, he believed, was the key to overcoming the growing sense of alienation among people and restoring human warmth to contemporary society.

“[Shin’ichi Yamamoto] was counting on the shift to the [group] structure to have a positive and significant influence on both the Soka Gakkai and society at large” (vol. 14, pp. 265–66).

And today, a half century later, how has this influenced the connections between the Soka Gakkai and society at large? Social entrepreneur Hiroki Komazaki has expressed his expectations of the Soka Gakkai in this way: “While policies adopted by the government are important, we also need to turn our attention to people who are alienated and suffering yet do not ask for help. It is not the state or individuals but community organizations that can readily provide outreach to such people. The Soka Gakkai, as a nationwide community that has firm local roots, is the largest of such organizations in Japan. Now more than ever before, we need organizations that respond to people’s plight in a very caring and embracing manner, proactively reaching out to them.”

This is precisely what President Ikeda envisioned 50 years ago. To value to the utmost our community, the place where we live—we have entered an age in which this perspective shines ever brighter, illuminating our society.

“Building a Soka Gakkai accepted and trusted by the community” starts with each member becoming trusted and appreciated in their community. I hope we can each step up and develop into such capable individuals.

In addition, my wish is that we continue to foster a steady stream of capable individuals who can triumph in the reality of this world.

And so, I hope each of us sets forth toward May 3, 2020, Sensei’s 60th anniversary as president, further advancing in our own human revolution while also establishing the correct teaching for the peace of the land! Thank you very much. WT

The Power of Our Inspiring Soka Movement

Advance on the Long Journey of Kosen-rufu!