The following are excerpts from SGI President Ikeda’s speech at the 4th Soka Gakkai Headquarters Leaders Meeting held in October 1996. These excerpts were featured in a video of the speech, which was shown during the 44th Soka Gakkai Headquarters Leaders Meeting of the New Era of Worldwide Kosen-rufu, held in Tokyo on Nov. 18. The text was published in the Nov. 28 issue of the Seikyo Shimbun, the Soka Gakkai’s daily newspaper.

Thank you for attending today. Let me begin by sharing these words of the French writer André Maurois: “I wish you obstacles and struggles. Battles will strengthen you. By the age of 50 or 60, you will acquire the vigor and toughness of old storm-lashed rocks. The hostile world will have sculpted you.”[1]

What is the treasure of youth? It is struggle; it is hard work. Without struggle, we can’t become strong. Those who fight earnestly in their youth will be fearless when the time comes to put the finishing touches on their lives. They will possess a life state as unshakable as “old, storm-lashed rocks.” In Buddhism, this is the dauntless life state of Buddhahood, the spirit of a great champion. That’s why I keep urging you to take on hardships and strive with all your might in your youth.

I, too, have fought hard. That’s what has made me strong and fearless. I am the disciple of the great Josei Toda. I am an heir to the noble legacy of the Soka Gakkai. That is why I have fought on like a lion, with a self-reliant spirit.

Strength is happiness. Strength is, in and of itself, victory. There is no happiness in weakness and fear.

Developing a strong spirit, strong faith and strong prayer is the key to victory and attaining the life state of Buddhahood.

I would therefore like to call on our youth division members: Sculpt an invincible self!

The Soka Gakkai has designated next year, 1997, the Year of Advancement Toward the New Century.[2] Congratulations!

Nichiren Daishonin also teaches that not advancing is regressing. The important thing is to continue forging ahead in the face of all storms and adversity, to press forward fearlessly like a lion.

Those who earnestly grapple with these realities develop strength and inner fortitude. They forge themselves and raise the banner of victory in their hearts. On the other hand, there are those who fail to challenge themselves or move forward when it’s the time to do so, instead complaining, shirking responsibility, making excuses and criticizing. Such people may appear to be leading pleasant, secure and comfortable lives, but in actuality they have given in to defeat.

In “The Opening of the Eyes,” the Daishonin quotes the words: “If you want to understand what results will be manifested in the future, look at the causes that exist in the present”[3](The Writings of Nichiren Daishonin, vol. 1, p. 279).

What kind of causes are you making now? What kind of actions are you taking now? This will determine your future, your life, into eternity. This is the essence of faith. Living in accord with this fundamental principle is the key to success and victory.

I hope that each of you will begin a fresh struggle for kosen-rufu with the courage of a lion.

Nichiren Daishonin also teaches that not advancing is regressing. The important thing is to continue forging ahead in the face of all storms and adversity, to press forward fearlessly like a lion.

I would like to speak a little about former Chinese Premier Zhou Enlai (1898–1976) and what is known as the Long March [in which revolutionary forces] marched on foot for some 7,800 miles—more than twice the length of the United States.

The Long March was brutal. They were attacked by dozens of enemy planes on a daily basis. They also encountered resistance from enemy forces on the ground and at times found themselves surrounded. They were plagued by illness and hunger. But they had to keep going, to keep fighting, to keep advancing.

And they did more than just march. Along the way, they steadily made allies of 200 million people in the 11 provinces they passed through, talking with them and sharing their ideals.

Without fanfare or fuss, crossing mountain after mountain and visiting village after village, they quietly planted the seeds for future victory. It was a process very similar to what we call “sowing the seeds of the Mystic Law” in our propagation efforts.

In 1960, a decade after the birth of the new government (in 1949), a well-known American journalist interviewed Premier Enlai about the nation’s future. Their conversation turned to the Long March that had taken place a quarter of a century earlier.

After listening to him recount his painful memories of the march, the journalist remarked, “You must look upon your remaining national problems as by comparison easy to solve.”[4]This and the following quotes are from: Edgar Snow, Red China Today (New York: Random House, 1971), p. 112.[/ref]

Premier Zhou shot back: “Easy! Nothing about them is easy!”

He continued, driving home his point: “Don’t ever quote me as saying anything is easy here. Ten years ago, our entire nation began a second Long March. We have taken the first step, that’s all—the first step.”

“The original Long March was a victory, but now we have begun a second Long March,” the premier asserted. What an admirable and inspiring spirit! Premier Zhou was not content to rest on his achievements; he was determined to keep advancing forever for the well-being of the Chinese people. 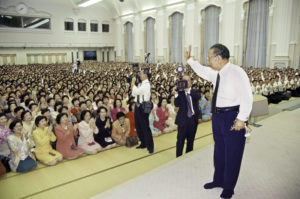 The Soka Gakkai is also advancing on a long march for kosen-rufu—a journey of 10,000 years and more. Our struggle has only just begun.

If we envision it as a 10,000-meter race, we have only covered about the first 50 meters. Everything lies ahead. Our real advancement begins from now on. A vast arena for action is open before us.

I hope you will boldly advance in your Buddhist practice with the conviction that, year after year, we are making our way forward on the long, eternal march to kosen-rufu. Let’s forge ahead joyfully and cheerfully together, with the Soka Gakkai spirit to fight, advance and win without fail, no matter what the situation.

Therefore, I call on young people to develop themselves as much as possible, for I will entrust the 21st century to them. The youth is my focus. I wish to train and foster them thoroughly. My wish is that they will splendidly bring our aims to fruition.

The Year of Advancement Toward the New Century is a year for fostering capable people for the new century. I hope that you will throw yourselves energetically into this effort with this firm commitment.

People can only develop true ability by engaging in actual struggles in the real world, taking on full responsibility without leaving things to others. This is the key to becoming a capable person.

Let’s bring this year to a successful close and usher in a happy new year.

Thank you for attending today! I deeply appreciate your tremendous efforts. Please give my best to all those who could not be here.
Let’s advance in high spirits together! WT

Advancing Together Wisely, Harmoniously and Joyfully