The following excerpt, adapted from The Human Revolution, takes place on March 30, 1958, just a few days before second Soka Gakkai President Josei Toda’s passing. Shin’ichi Yamamoto (SGI President Ikeda’s character in the novel) reports to his mentor about having to call out the Nichiren Shoshu’s chief instructor of acolytes (young boys training to be priests) for his cruel treatment of acolytes and his excessive drinking. In response, President Toda offers clear insights into the nature of the priesthood and conveys his final injunction to never slacken in the struggle against evil.

“It’s a real shame. It may seem like a small thing, but it embodies the much larger issue of corruption and decadence within the priesthood. Why has such degeneracy begun to appear? Because priests have forgotten to live for the ultimate purpose, kosen-rufu. Once you lose sight of this one point, everything goes awry. It’s too bad. While paying lip service to the eternal prosperity of the Law, many priests are concerned only with protecting their own status and fulfilling their own greedy personal ambitions. As a result, they’ve become prisoners of desire and lapsed into a depraved state of animality. That’s why they can look upon those weaker than themselves—such as the young acolytes—merely as objects upon which to vent their wrath. They also lord it over the Soka Gakkai members, regarding them as no more than slaves who bring donations . . . ” 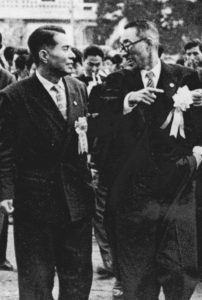 “During the war, too, the priesthood compromised the teachings to protect themselves, violating Nichiren Daishonin’s will and soliciting favor with the militarist government. And when President Tsunesaburo Makiguchi and I were arrested, they barred Gakkai members from visiting the head temple, afraid of being associated with us. I was so outraged, I could have wept tears of blood.”

Toda continued, his chest heaving heavily as he spoke:

“During the war, it wasn’t outside enemies that threatened to destroy Nichiren Buddhism; it was the self-serving actions of cowardly, equivocating priests who were interested only in protecting themselves. This deeply pained high priests Nichiko and Nissho, as well as present High Priest Nichijun, who all tried to keep the school’s doctrines intact. But most of all, it was President Makiguchi and the Soka Gakkai who rigorously protected Nichiren Buddhism, enabling it to survive. This is why we can say that the Daishonin’s spirit and genuine faith in his Buddhism exist only in the Soka Gakkai.

“It was President Makiguchi and the Soka Gakkai who rigorously protected Nichiren Buddhism, enabling it to survive. This is why we can say that the Daishonin’s spirit and genuine faith in his Buddhism exist only in the Soka Gakkai.”

“The priesthood has been able to reestablish a pure connection with Nichiren Buddhism only because, since the war, it has cooperated in forging harmonious relations with the lay believers of the Soka Gakkai. Should the priesthood ever separate itself from the Soka Gakkai, Nichiren Shoshu would become only a school that slanders the Law and tramples upon the true spirit of Nichiren . . .

“Furthermore, through its sincere offerings based on faith, the Soka Gakkai has supported the priesthood, which lost its financial foundation during the war and was in danger of collapse. Sincere priests appreciate our efforts. But some are jealous of the Soka Gakkai’s remarkable growth and harbor animosity toward me personally. Because I am strict about matters of faith, they regard me as a thorn in their side. But as long as I’m alive, none of them will say this to my face. That’s because I am the only one who has risked his life to protect this Buddhism. But there is no telling what they’ll do once I’m gone and High Priest Nichijun has passed away.”

Though his words were halting, Toda spoke with extraordinary vigor. “There may appear a high priest who will attempt to use clerical authority to enslave the Soka Gakkai and try to manipulate it according to his whims. Particularly, when the priesthood has secured its financial base and gained a degree of wealth, it will surely try to sever its ties with the Soka Gakkai. Nor is it inconceivable that the priesthood might again take the lead in undermining the Law and become the abode of the devil king of the sixth heaven, just as it did during the war. But, we must never allow the true teachings of Nichiren to be destroyed.”

Summoning his last ounce of energy, he passionately implored Shin’ichi:

“For that reason, you must fight adamantly against any evil that takes root within the priesthood. Do you hear me, Shin’ichi? You must never retreat a single step. Never slacken in your struggle against such evil.”

For a moment, Toda’s eyes blazed. It was his final injunction, his last will to his beloved disciple. Shin’ichi etched each of Toda’s words into his life.