Nichiren Daishonin states: “All my disciples and followers should read and listen to this letter. Those who are serious in their resolve should discuss it with one another” (“The Votary of the Lotus Sutra,” The Writings of Nichiren Daishonin, vol. 1, p. 449).

Soka Gakkai meetings are gatherings where people study and discuss the essence of Buddhism in accord with this wish of the Daishonin. They give rise to boundless happiness and joy, and produce a continuous flow of fellow Bodhisattvas of the Earth.

My first encounter with my mentor, second Soka Gakkai President Josei Toda, was at a discussion meeting held in Tokyo’s Ota Ward, on Aug. 14, 1947, the eve of the second anniversary of the end of World War II.

Mr. Toda always prepared thoroughly for each discussion meeting he attended. Though I was a guest at the meeting, it appears Mr. Toda had already heard about me from my friends, who were local members. He spoke with me as if I were a longtime friend, asking how old I was and encouraging me to study with youthful enthusiasm and give Nichiren Buddhism a try. 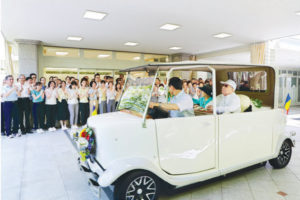 SGI President and Mrs. Ikeda visit the Nagano
Training Center on Aug. 9, 2019, commemorating the 40th anniversary of President Ikeda’s first visit to the facility, a place for nurturing capable people for kosen-rufu. Together, they expressed their appreciation to the Soka Gakkai members there, Nagano Prefecture, Japan. Photo by Seikyo Press.

Filled with memories of my shared struggles with my mentor, I visited Saitama and Nagano prefectures earlier this month (August 2019).

On Aug. 4, while thinking of the Soka Family Gatherings being held throughout Japan that day, my wife, Kaneko, and I made our way to the Soka Gakkai training center in Hidaka, Saitama.

It has been more than a decade since my last visit, and I was pleased to find this castle of mentor and disciple in pristine condition. Three stone monuments adorn the garden, each engraved with a calligraphy of one of the first three presidents—“Great Aspiration” by [founding Soka Gakkai President Tsunesaburo] Makiguchi, “Compassion” by Mr. Toda and “Unity” by me.

Mirroring these inscriptions, the members of Saitama, which is renowned for its unshakable unity, and indeed all of the Kanto Region,[1] which is a model for the rest of Japan, are achieving victory after victory. They are advancing in a spirit of warm friendship, and mutual support and care.

On display at the training center were photographs of the World Peace Culture Festival held in Saitama’s Tokorozawa (in September 1982). They brought back many fond memories. The young people who put on a brilliant performance at that festival, undeterred by the rain, have grown splendidly, and are today making wonderful contributions on the stage of their mission.

Aug. 14 is also Kanto Region Day and Kansai Mentor-Disciple Prime Point Day. I am praying earnestly for the good health, safety and security, great good fortune and unending victory of all our members in Kanto, Kansai and regions throughout Japan and the world.

This summer marks 40 years since I made my first visit to the Nagano Training Center (in 1979). The center has become an inspiring power source of human revolution. The members of the Soka family in the Shin’etsu Region—Niigata and Nagano prefectures—have built a towering mountain range of capable individuals. They are demonstrating actual proof of the principle that “unseen virtue brings about visible reward” (“The Farther the Source, the Longer the Stream,” WND-1, 940). The deep friendship and trust they are creating in their local communities are also impressive.

On the anniversaries of the atomic bombing of Hiroshima and Nagasaki (Aug. 6 and 9, 1945), I renewed my vow for peace and offered solemn prayers at the training center for all those who died in the blasts and for all who lost their lives in the war.

Eight years and five months have passed since the devastating March 2011 Tohoku earthquake and tsunami. I am filled with profound respect for the efforts of our precious members in the Tohoku Region, who continue to forge ahead tirelessly in the summer heat to accelerate the pace of recovery and renewal in their communities.

Mr. Toda once praised the members of Tohoku’s Sendai Chapter in the early days of our movement, highlighting three key points that they exemplified: 1) a passionate Soka Gakkai spirit, 2) abundant encouragement and 3) friendly unity.
These are unchanging guidelines for the development of our organization.

The Daishonin writes: “At first only Nichiren chanted Nam-myoho-renge-kyo, but then two, three, and a hundred followed, chanting and teaching others. Propagation will unfold this way in the future as well” (“The True Aspect of All Phenomena,” WND-1, 385).

In accord with this principle of bodhisattvas “emerging from the earth” described by Nichiren, let us joyfully strive even harder to call forth and awaken an ever-growing stream of young people through heartfelt encouragement. WT

From the Aug. 14, 2019, issue of the Seikyo Shimbun, the Soka Gakkai’s daily newspaper.

Advancing in “The Two Ways of Practice and Study”

A Grand Bastion of the Written Word